Well, the teaser site for Square-Enix’s new game has his zero. If you’re expecting to read about Square-Enix’s new Final Fantasy game, you will be sorrowly dissapointed. I’m sorry to say this, but I have no idea what the heck this site says. 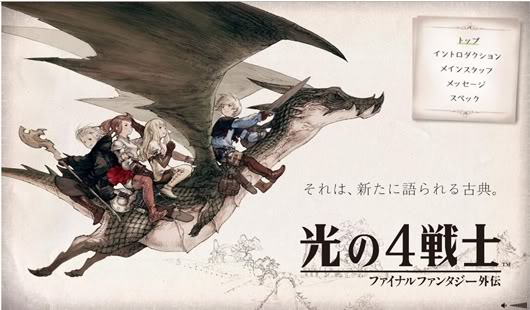 I’m very sorry to say that this great looking teaser ends in Japanese characters, and I don’t know Japanese.  I can read some important things on the other pages though. This new game will be, obviously, a Japanese Role-Playing Game. Also following a Square-Enix tradition, it’s being released on the Nintendo DS. They plan to release the game sometime in 2009, so expect it in Japan soon, and everywhere else, not so soon. The producer of the game mentioned Final Fantasy III and Final Fantasy IV in the message page.

Stay tuned for more info once I can get the english translation.

Edit #1: Thanks to a find by wackyzaky7, we have a bit more info on the new game. The large Japanese characters roughly translate to “4 Warriors of Light: Final Fantasy Gaiden”, following the trend of popular game franchises adding Gaiden to the end of the name, which died years ago. The game will feature 4 player cooperative multiplayer.