Star Wars: Jedi Fallen Order Graphics Analysis – One of the Best Looking Games of this Gen

Star Wars Jedi: Fallen Order has been described as a “make or break” moment for single player Star Wars experiences. Following the cancellation of Project 1313 and the reboot of Battlefront as a kind of off-year Battlefield, it seemed less and less likely that we’d go back to the days of, say Jedi Academy or Knights of the Old Republic. Star Wars’ incredible atmosphere has always lent itself well to contemplative, long single-player experiences.

In this context, Jedi: Fallen Order is much appreciated–there haven’t been many single player Star Wars games in a while and this title neatly fills that gap. What we’re interested in, though, is if it works from a technical perspective. This is a title developed by Respawn, the guys behind Titanfall 2, and directed by the person who was in charge of God of War III. Both games are shining examples of single player excellence and platform optimization. So what’s Respawn done in Jedi: Fallen Order on a technical level? Let’s take a deep dive. 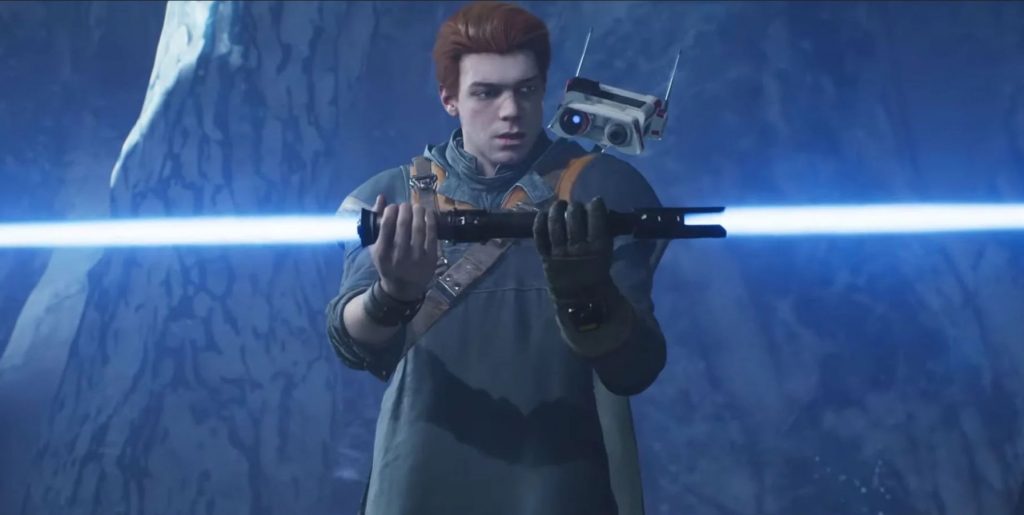 One immediate surprise about Jedi: Fallen Order is that it doesn’t use the Frostbite Engine. EA went to some effort to consolidate its developer stable’s engine use–everything from FIFA to Battlefront leverages Frostbite. This has some obvious advantages–teams can build off modular additions to the engine from other studios and share know-how. But Frostbite isn’t quite the one-size-fits-all silver bullet EA wants it to be. A quick look at Bioware’s woes with Mass Effect: Andromeda tells you all you need to know here.

Respawn has, instead, chosen to develop Jedi: Fallen Order on Unreal 4. Epic’s engine is a go-to this generation for mid-sized single player experiences. Plenty of games from walking simulators like Kholat right up to Gears 5 leverage Unreal 4 to great effect. We think this was a good decision: Unreal 4’s exquisite post-process pipeline and TAA are great for recreating a filmic Star Wars experience. The engine uses deferred rendering, with support for a large number of dynamic light sources onscreen at a time. This is something that Respawn fully takes advantage of. If anything, Star Wars is defined by big flashy lights: lightsaber trailer, blaster bolts, thermal detonator explosions, and more. Deferred rendering lets Respawn make all these lights emissive, interacting realistically with their surroundings. We were particularly impressed by a moment early on in the game: your character engages in a lightsaber duel in the rain: your saber–and the Sith’s saber–illuminate individual rain droplets. Lighting is key to Star Wars and Respawn’s choice to go with Unreal 4 has helped it nail lighting in Jedi: Fallen Order. 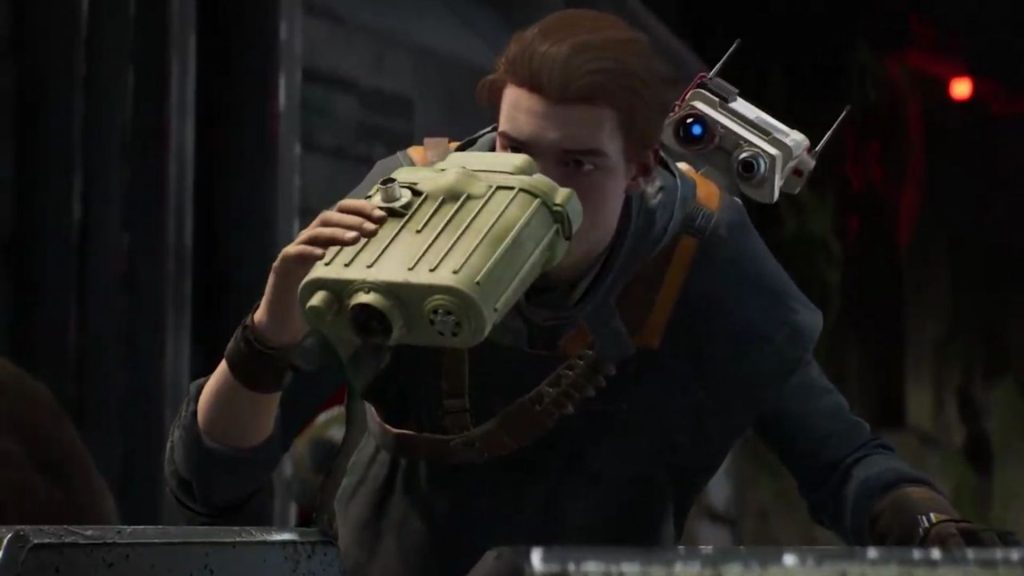 Texture work in Jedi Fallen Order is of a remarkably high quality. 4K assets are seen in use, both for character textures and the environment. This leads to a large file size, thought quite on the same scale as Red Dead Redemption 2. While we don’t have confirmation here, it’s possible that Respawn leveraged Dice’s Star Wars photogrammetry library for the texture work. Because these textures were scanned in from real Lucas Films props, it allows them to look not just realistic, but true to Star Wars. Physically based rendering is in full effect here. Metals and gloss are a strong point for PBR. This being Star Wars, there’s metal and gloss all around: everything from Star Destroyer hulls to Stormtrooper helmets looks like it was ripped straight from the movies.

Unreal 4 provides an excellent temporal anti-aliasing solution by default. This is one of those “if it’s not broken, don’t fix it,” situations. Respawn’s deployed it as-is and it looks great in action. There is a bit of softness to the image, but works in the game’s favor, as it emphasizes the cinematic look that Respawn’s going for. In exchange, you get excellent aliasing coverage and a temporally stable image. With the amount of effects work and fast-moving set pieces, anything else would have resulted in way too much unsightly pixel crawl. 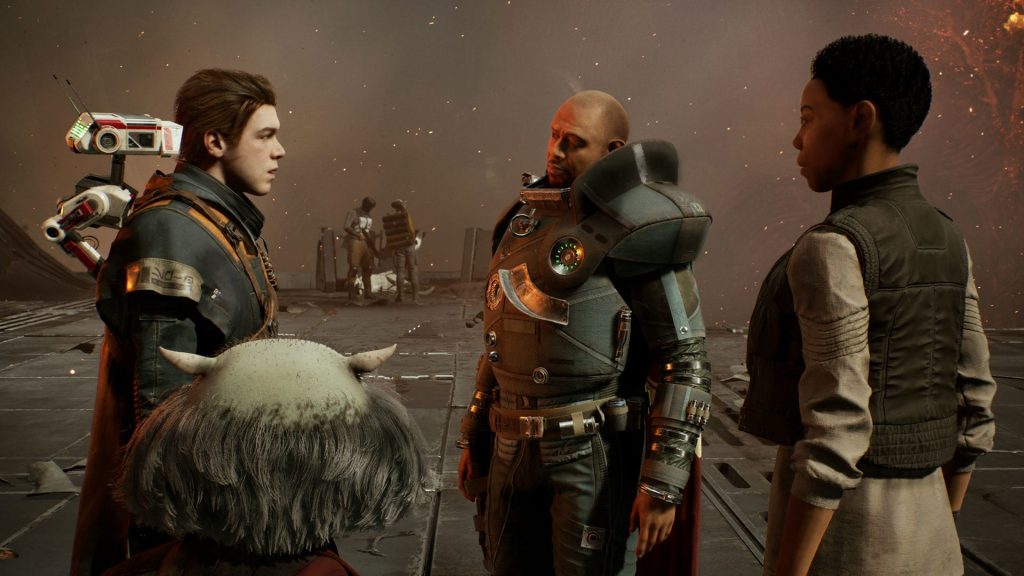 Unreal 4 was a great choice for Jedi Fallen Order because of the wide range of high quality particle effects and post-processing on offer. These two areas have been strengths for UE4 from the very beginning—as far back as 2013’s Elemental tech demo. Jedi: Fallen Order features explosive moment-to-moment combat and large-scale set pieces. Unreal 4 does a great job of meeting its needs in both cases.

We see extensive use of volumetric particle effects, from smoke to spark from a lightsaber. Particle volumes are emissive—they light other objects, but they also receive light themselves. Apart from the scene we mentioned earlier with the duel in the rain, your light saber may light up smoke volumes, and floodlights in indoor exploratory areas illuminate fog in the distance. This is fairly standard stuff—Jedi: Fallen Order doesn’t do anything new exactly with regards to particle rendering. However, the relatively narrow level confines let Respawn make every explosion that much more lavish.

With regards to post-processing, we see the full rang of UE4 post-process effects in place. Motion blur, with both per-object and camera blur in place, plays a big role in this game. With the consoles locked to 30 FPS, a generous dose of camera blur smooths out movement and helps mask dips below the 30 FPS mark. Elsewhere, motion blur is used in set pieces to great effect—very early on in the game, you’re atop a train and motion blur excellently conveys the sense of your motion, relative to the other trains hurtling past. We see a dynamic depth of field effect in place, too albeit limited to cutscenes. Light bloom plays a prominent role as well, with bloom accenting explosions and blaster shots.

Jedi Fallen Order is a genuinely good single player experience. We’re happy with the Souls-lite combat and reasonably wide levels, paired with a fine Star Wars narrative. While Battlefront II had a singleplayer mode, it just felt too mechanically similar to multiplayer to really offer anything different. Jedi: Fallen Order instead draws on earlier titles like the Jedi Knight series. Respawns decision to use Unreal 4 instead of Frostbite was puzzling. But once we saw the excellent work they did with materials and particle effects, it made complete sense.