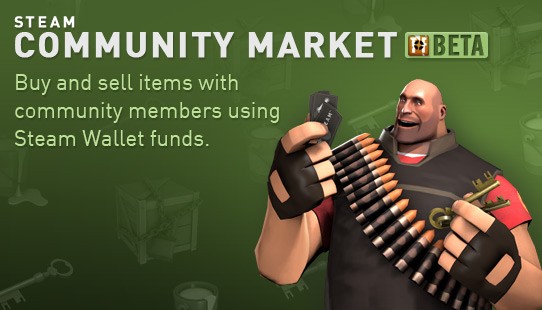 If Steam Greenlight, Big Picture and rumours of a next generation console aren’t enough, Valve has announced that the new Steam Community Market is now entering into beta phase with Team Fortress 2. And luckily, it doesn’t look like it’ll be a nightmare like Diablo 3’s Auction House.

The Community Market has been designed to allow players to buy and sell in-game items with other players for Steam Wallet funds. As of now, what those funds can be used for and how far-reaching their effects are remains to be seen, but the concept is ripe for potential on a platform like Steam.

Valve’s Tony Paloma commented: “With over a half million trades made every week, the trading system has been very successful. Extending game economies beyond trades and giving players a way to turn gameplay into funds for new items and games is a key component for moving that success forward.”

Look out for the Community Market to be enabled with other titles in the New Year. For more information on specifics like transaction feeds, check out the Market FAQ.