It seems that all those calls for hardcore Kinect games have finally been answered in Steel Battalion: Heavy Armor. With this futuristic tank sim, Capcom is providing a game that not only redefines the meaning of “hard” but one that certainly isn’t targeting families, children or casual gamers. Surely, this is everything the Kinect critics could have wished for..?

The action takes place in 2082, an era altogether less reliant on computers and technology. Apart from, that is, the giant bipedal robot tank you’re put in charge of to see off rival superpowers threatening the world. You take the role of Lt Powers, in control of your very own vertical tank – or VT – and the myriad buttons and levers that reside within. 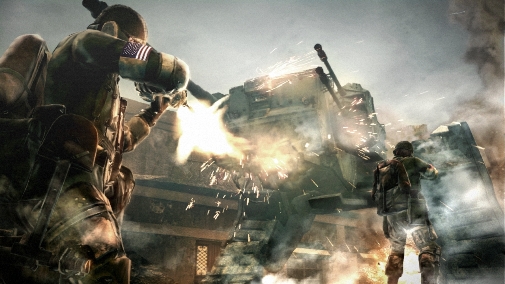 You’re in charge of a bipedal mech, the VT – or vertical tank

It’s a first controlwise; Steel Battalion requires both a standard pad and Microsoft’s Kinect, and uniquely allows you to spend the majority of your time seated rather than prancing about the room – an added bonus for those of us sick of working up a sweat with all those dancing and exercise titles.

Somehow though I figured there may be problems with the control method when I thumbed through the instruction manual and read that the gesture to flip a light switch on and off was almost identical to that of pushing the self destruct button. Kinect isn’t renowned for its accuracy afterall… 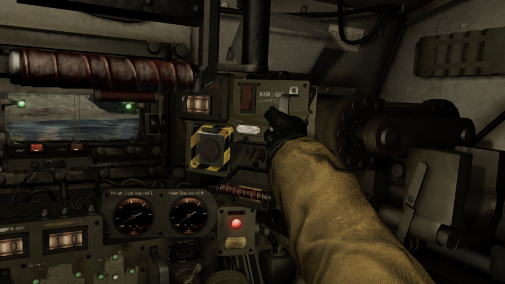 Make sure you hit the right switch – lights on, not self destruct!

That aside, the whole premise is insanely clever considering the original Steel Battalion on the Xbox required a purpose-built 40-plus button controller and cost the earth. On paper, at least, Kinect makes games like this possible for the masses and opens up a whole new genre to those who bought the sensor.

In reality, however, it’s a bit of a different story. The game opens with a decent-length tutorial that helpfully explains the basics. The control pad moves the lumbering mech, adjusts your camera angle and fires the guns, whereas the innards of the tank are manipulated using good old Kinect. It’s billed as a marriage made in heaven… and at first, it all seems to be an inspired idea.

First impressions were fairly positive. You really do feel like you’re in an enclosed space, surrounded by nothing but metal, buttons and your three crew members. Every step of the two-legged VT is felt thanks to the vibrations from the controller and – apart from those slightly dodgy sensitivity issues all of us Kinect owners are familiar with – it kind of does feel like you are physically pulling a lever or reaching for the periscope. 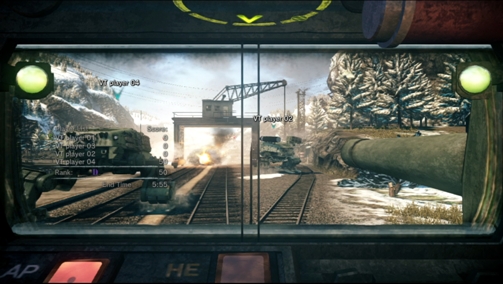 Most of the time, you’ll be staring out of this small window

After mastering the basics of movement, you’re given the lowdown on how to make the VT move faster, switch guns, turn to address your colleagues and extract harmful smoke from the cabin. Reaching both arms straight ahead lets you stare through a small window through which most of the action takes place. With that shutter closed, the only real alternative to see what’s going on is to use the periscope or pop your head out of the canopy and have a good look around – although in the heat of battle that isn’t really advisable.

Your vision therefore, is heavily restricted most of the time and, although it adds to the sense of confinement, it adds to the game’s trickiness. That’s especially true given the likelihood that soon as soon as you come under enemy gunfire, smoke will fill the driver’s compartment and cracks will appear on the visor limiting your vision further.

In the heat of battle, with missiles raining down on you and the VT being peppered with small arms fire, it’s clear that Kinect is often more of a hindrance than a help. Under pressure, while extracting smoke from the metallic beast and hearing the groans of your fallen comrades, it’s often a task in itself to gesticulate in the correct manner to operate the necessary lever to get the hell out of there, or to raise the aforementioned periscope to see what the hell is shooting at you! 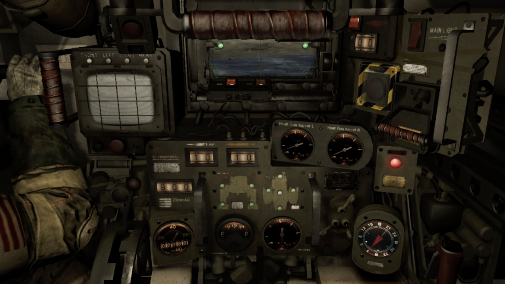 Even when you do figure out what’s going on, hitting the target with your cannons is a trial in itself. In fact, it’s far more likely you’ll be encased in a smouldering mound of mangled metal long before you fathom how to shoot accurately.

Some missions are hard as nails and require countless restarts, relying as much on trial and error as skill and ability. Others are a walk in the park and pose few problems. With the slightly broken controls, however, the game is far harder than it should be.

Graphically, it’s okay. There’s nothing here that puts any real strain on the system and most of the time all you see is the world through a tiny rectangular window, or the inner workings of your VT and your profanity-spewing comrades.

Nevertheless, the overall concept is very impressive at first and you can’t help but get a buzz out of physically controlling a tank, feeling every rumble and gunshot. It’s just a shame that Kinect isn’t really up to the task – and this is noticeable even in the opening mission, a kind of Saving Private Ryan beach assault… with giant robots. No sooner have you set metallic foot on the beach, then you get riddled with bullets and have little idea of what’s going on or where to go. Reacting to the situation using hand movements to pull levers or glance at the map is often frustrating. It certainly adds to the tension… but for slightly the wrong reasons. 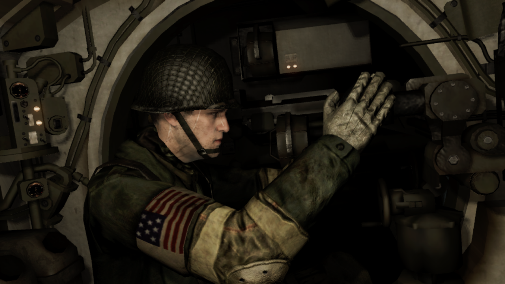 For all its flaws, the use of Kinect is clever and feels good when it works

Kinect haters will no doubt lap up the criticism aimed at Steel Battalion but Capcom  and From Software should earn some kudos for trying something new. It was an ambitious take on revitalising a cult game and using new motion control technology rather than relying on an unwieldy 40-button control pad.

The plot is interesting and the input method is innovative and unique…sadly, it just doesn’t quite live up to expectations. Nevertheless, I can’t help but feel this is a game Kinect owners should at least try. It highlight’s some of Kinect’s limitations but also some of its promise.

Does actually feel like you're driving a tank - and the use of Kinect is very clever indeed. The story is good and, if you don't get too frustrated with the controls, will offer a decent challenge

Shows off Kinect's flaws - the accuracy and precision needed in the heat of battle is often lacking, leading to frequent deaths. Throws you in at the deep end. Missions can be really tough

Final Verdict:
FAIR
Steel Battalion puts the "hard" in hardcore. An innovative use of the hardware and a nice change from all the usual dance titles. Sit down, control a tank and kill bad guys
A copy of this game was provided by Developer/Publisher/Distributor/PR Agency for review purposes. Click here to know more about our Reviews Policy.