Grand space operas playing out over intergalactic war, empire expansion and cut-throat alliances – among other things – are the dream of 4X strategy fans. Or at least I would think it is. Having experienced real time strategy titles like Battlefleet Gothic: Armada recently, diving into a 4X game like Paradox Development Studio’s Stellaris seemed like learning to swim before then embarking on a journey across the English Channel. Fortunately, it only opened my eyes to the sheer fun and excitement that building your own empire can entail…even if that means having to contend with an oddly annoying interface and some late-game hiccups along the way.

"This is where Stellaris could have been daunting for your average strategy player but Paradox’s in-depth tutorial system which guides you through each step until your familiarized with all the mechanics."

4X stands for explore, expand, exploit and exterminate and there’s almost plenty of each to go around in 2206. You start off choosing an empire and customizing it to your heart’s content, from the race to the travel method, traits, banners and much more. Then again, you could also just create your very own empire from scratch. Maybe you want a mammalian empire that’s militaristic and Xenophobic where you’re the absolute ruler without question. How about an avian fanatic collectivist that endorses slavery and shuns individualism to benefit the greater good? Make sure you choose wisely since every ethic and form of governance will an effect on traits like food consumption, diplomacy and much more. It’s also important to decide which weapons and travel modes you want your ships to have since they can influence how you’ll be getting about the galaxy and annihilating your enemies.

The sheer scope of choices made to your empire is only the beginning. From here, you choose the size of the map, the galaxy shape and your neighbouring empires and you’re off to expand on your empire. So how do you that? This is where Stellaris could have been daunting for your average strategy player but Paradox’s in-depth tutorial system guides you through each step until you’re familiarized with all the mechanics. Make no mistake – there’s a lot to get through in Stellaris, from assigning your science ship to survey a planet and building space stations to harvesting resources and populating said planets.

That population is going to be key towards growing your empire but you’ll need to manage energy, food, minerals and other resources to keep things running in check. You can also grow your Influence though it’s never made clear how it increases. Needless to say, think twice before drafting some new laws or making political decisions. You never know how it could affect the way your empire is viewed in the eyes of your allies and enemies. 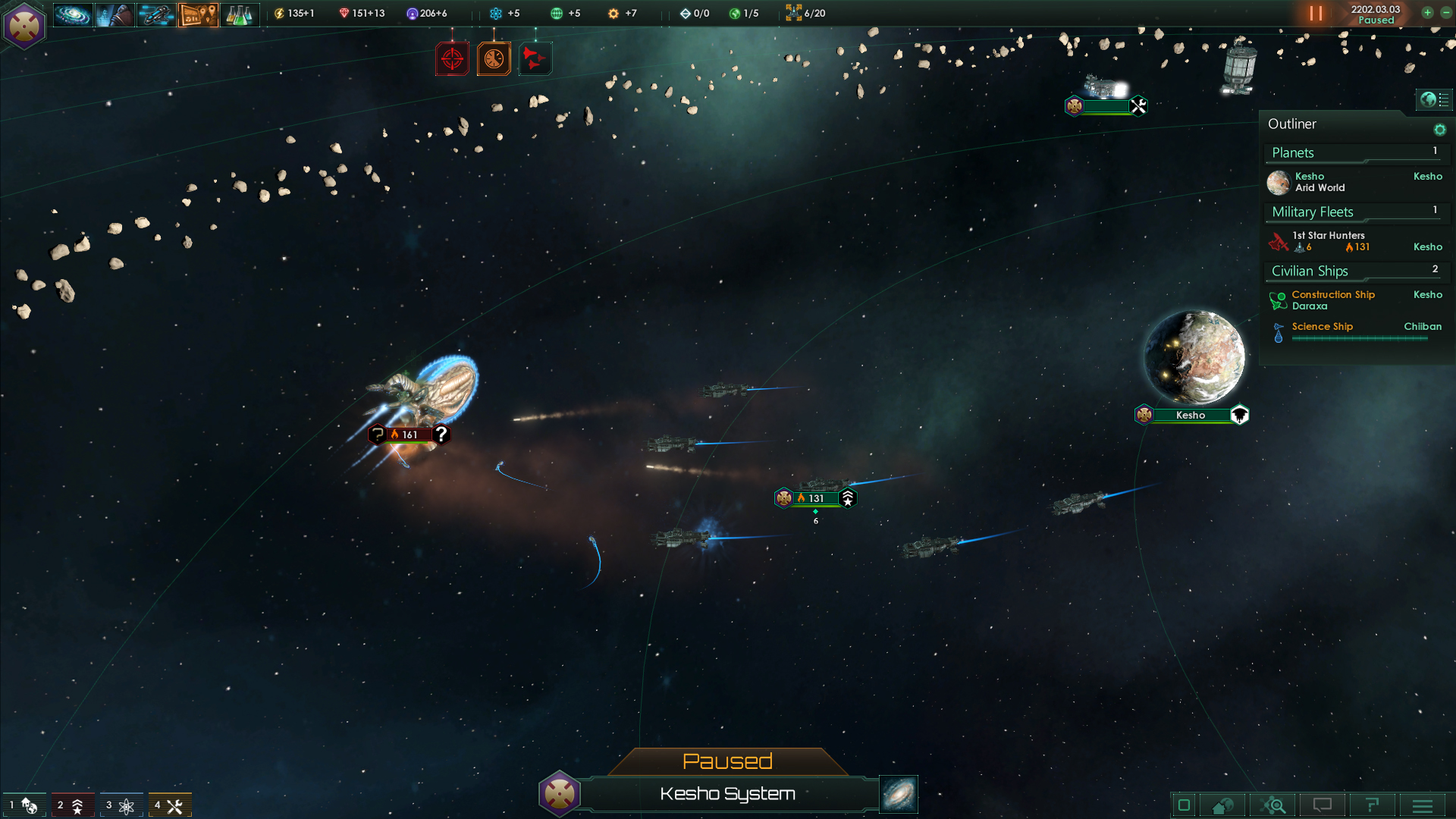 "Combat could probably be the weakest part of Stellaris. Not only does it feel kind of empty at times (and that’s probably the RTS fan in me wanting something more) with the tactics involved but the situations can feel iffy."

Once you begin discovering new planets and uncovering quests while running into other empires, you’ll get into the bulk that Stellaris has to offer. Colonizing planets with multiple species, balancing what kinds of Pops (i.e. populations) can live in which environments and along with which races and building alliances. With regards to negotiations, there isn’t all that much to really do. The interface comes across as simple and as long as your Trade Acceptance score is alright, you should get by just fine.

Research is divided up into Engineering, Society and Physics, each providing its own share of resources and it’s more randomized in the options provided. You’re not following a set path so much as choosing what would be the best possible benefit at that point. On the one hand it leads to unpredictability and an element of randomness to go with the replay value. On the other hand, some choices are clearly better than others like populating new planets while acquiring new weapons may not exactly make all that much of a difference in combat since you’re not really deciding which guns get used.

Combat could probably be the weakest part of Stellaris. Not only does it feel kind of empty at times (and that’s probably the RTS fan in me wanting something more) with the tactics involved but the situations can feel iffy. They’re either unbalanced in your favour with enemies declaring war and defeating you handily or refusing to attack. Having to carefully look out for your partners to repel a powerful foe can be dissuasive in this regard and there didn’t seem to be any moderately incremental ways to increase my empire’s breadth through war. 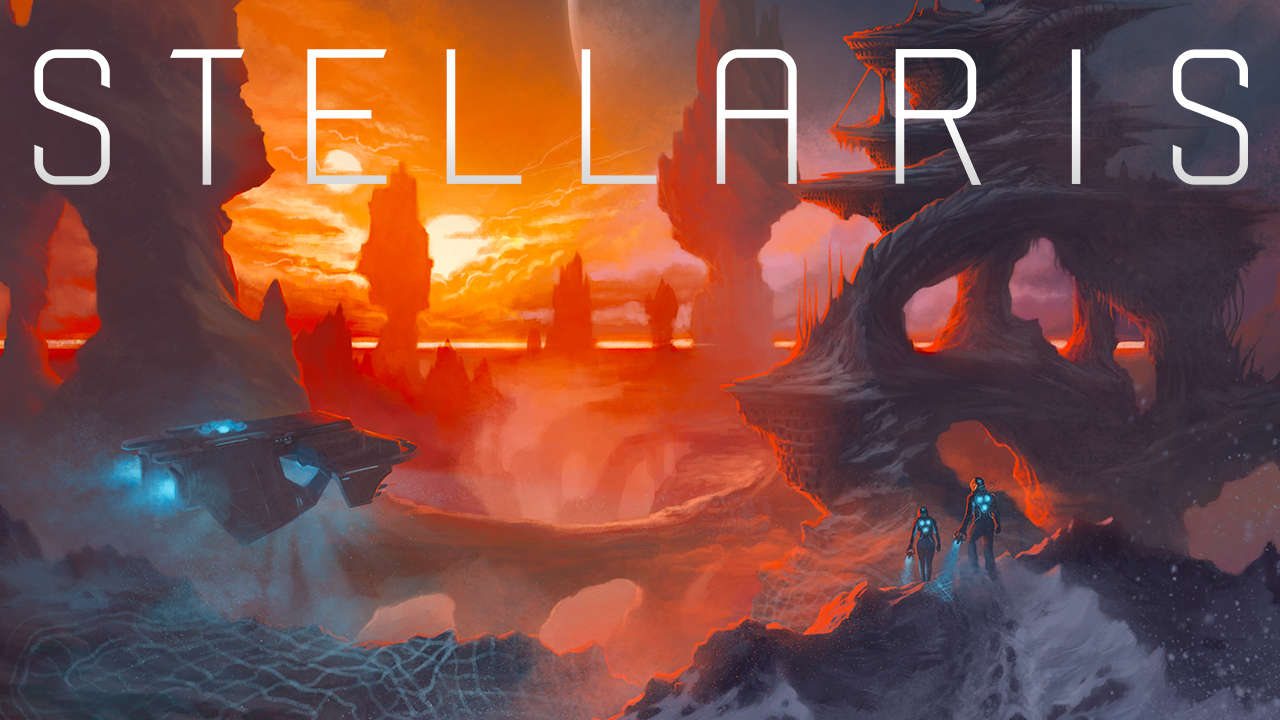 "Honestly, there’s an incredible base and strong early to mid game to grasp, especially when you’re experimenting with different races and empires. I wish there were more options for choosing how to deal with other empires and perhaps some more exciting combat."

Also, for all the help the tutorial provides, it’s difficult to figure out how to properly manage sectors when your empire becomes too big. Governors are supposed to be assigned to fetch you resources but the offset to micromanagement was made worse by the fact that these sectors don’t build their own ships or show up in the default planet lists. It just causes a needless amount of confusion and busywork.

There are other issues like the odd bug or three though performance is fairly solid throughout and patches have only ensured that the experience is smoother. The late game “catastrophes” showed up rarely and didn’t seem to have as cataclysmic an effect on the gameplay as they seemed, especially since they’re meant to freshen up the game at that point. Despite these issues, it’s hard to ignore how much fun Stellaris can be when you’re just expanding your empire, exploring the universe, discovering new things and understanding cultures when you’re not deploying robots to subjugate them. The visuals are very nicely handled and the design for each race and unique ship (especially those forged through alliances) looks great. The musical score as well is suitably epic while immersing you into the operatic nature of this deep space drama.

Honestly, there’s an incredible base and strong early to mid game to grasp, especially when you’re experimenting with different races and empires. I wish there were more options for choosing how to deal with other empires and perhaps some more exciting combat. Nevertheless, Stellaris will scratch your galaxy conquering itch and make you indulge in adventuring to your heart’s content. The late game may not be the easiest to manage but the easy introduction is more than enough to guide even casual fans into the fold.

Huge amount of variety in exploration, building an empire and engaging with the universe. Always something new to discover. Great visuals and soundtrack which enhance the mood even more. In-depth tutorials ease even newbies into the experience well.

Interface can pose a hindrance in some ways. Not a lot of options to engage with other empires. Combat could feel a lot more action-packed or tactful. Late-game events aren't as frequent as one would like. Sectors don't feel intuitive.

Stellaris isn't perfect, but it can easily improve in its problematic areas. For the dozens of hours you'll sink into first establishing your empire, it's a fun experience even if it doesn't quite unseat the likes of Master of Orion or Civilization.

A copy of this game was provided by developer/publisher for review purposes. Click here to know more about our Reviews Policy.
Tagged With: paradox development studio, Paradox Interactive, pc, Stellaris