Throughout history, the fighting game genre has gone through its transformations. How much can you really innovate on two characters beating the life out of each other? As it turns out, quite a bit. Darkstalkers, Soul Calibur, Tekken, Guilty Gear, BlazBlue, Virtua Fighter, Dead or Alive…the list goes on when it comes to significant fighting games over the decades. Two signature entities have always managed to maintain their presence though – Mortal Kombat and Street Fighter. The former took a nosedive of sorts last year due to network issues with its multiplayer. Street Fighter 5, Capcom’s latest entry in the series, is in a different position…or is it? It’s the first major sequel in the franchise since Street Fighter 4 first released in 2008. For better or worse, it can only be accessed on PC and PlayStation 4, leaving Xbox One players in the cold. How do you innovate on what many considered to be one of the greatest fighting games of all time, especially when said game was further refined in follow-ups like Ultra Street Fighter 4?

"The new V-Gauge replaces the Focus system of old and changes things up in an interesting fashion. The V-Trigger and V-Skill abilities are your basic go-to mechanics in the beginning."

In terms of gameplay, Street Fighter 5 still proves why it’s the king. Controls are responsive and fluid – fighters move naturally and without any clunkiness or delay. This highlights the overall visual finesse of Street Fighter 5. If Street Fighter 4 was all about the wildly irreverent ink streaks and splotches, then Street Fighter 5 takes a decidedly more mature approach. Running at 60 FPS with High settings and 1080p resolution on PC, it’s amazing to note the personality that each fighter can exude by simply standing still. Environments are mostly static and don’t really affect the battle but they manage to stand out in their uniqueness for the most part.

The range of fighters is interesting this time around simply because you can’t get any more balanced than this. Ryu and Ken are your typical all-arounders. Fighters like Cammy and Chun-Li emphasize quickness and rapid strikes. There are plenty of others which can fit your play-style like the new F.A.N.G. who mixes rapid strikes with poison attacks that can deplete health or M. Bison whose strength and unpredictability offsets his slower movement.

The new V-Gauge replaces the Focus system of old and changes things up in an interesting fashion. The V-Trigger and V-Skill abilities are your basic go-to mechanics in the beginning. V-Skill is a special ability unique to each character that can activate on pressing both Medium attack buttons. Ryu, for example, can parry attacks with his V-Skill while Ken uses a quick step forward to close the distance. Successfully using V-Skills builds up the V-Trigger which can be activated by hitting both Heavy attack buttons. 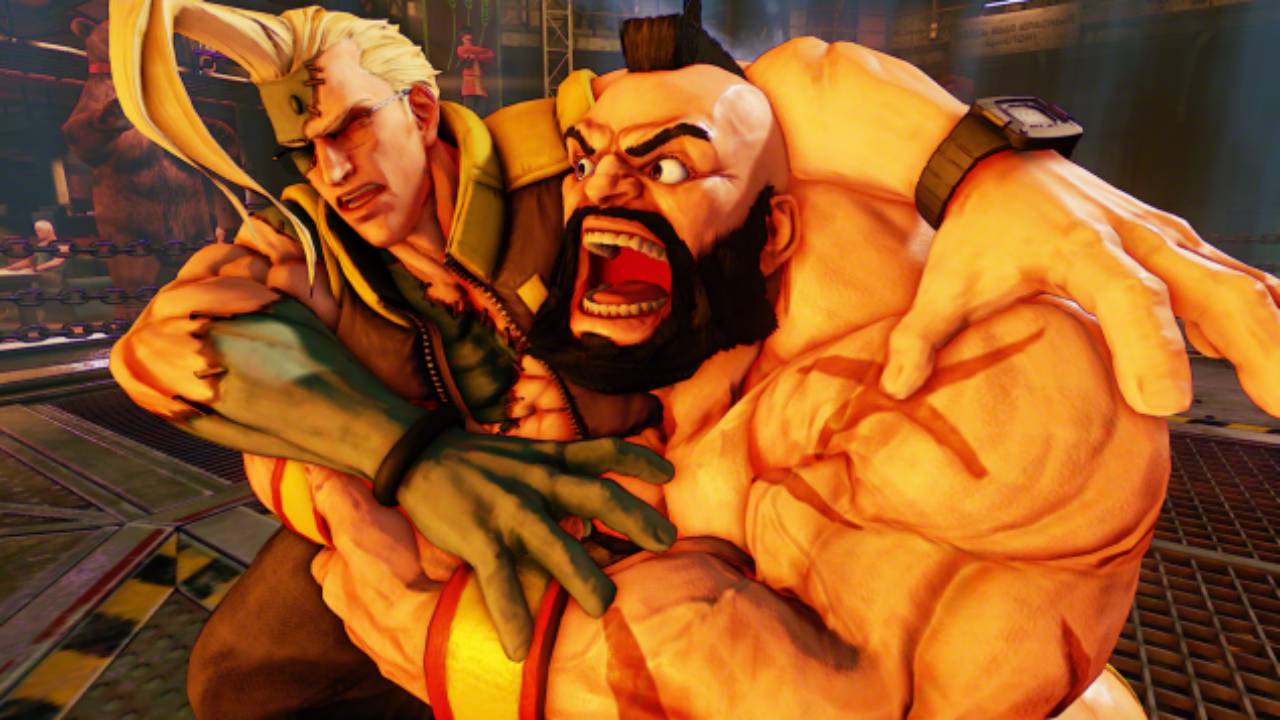 "The problem – or rather, the fact – is that Street Fighter 5 doesn’t have a whole ton of content. The Story Mode is quite laughable with each character completing four fights each and solving conflicts via still-picture cut scenes."

This confers a “unique” version to your fighter’s range of special moves and attacks. Ken’s V-Trigger, for instance, will add a flame effect to his Shoryuken and Hadouken. Knowing your character’s V-Skill abilities and when to use them, along with successfully pulling off V-Triggers, holds the key to victory. Don’t think your enemy is in a corner when you use V-Triggers though – they can use their V-Gauge to execute V-Counters to your attacks, consuming some of the gauge in the process. It should also be noted that you still have you Special meter for pulling off hard-hitting combination attacks that can significantly turn the tide of battle without outright smashing an opponent.

Gameplay-wise, Street Fighter 5 is amazing. Presentation-wise, the game’s visuals, music and sound design are fantastic, even for those who aren’t fans of the English voice acting in Story Mode (thankfully, it can be changed). There’s also a better way to ease players into the game, offering a flashback session of sorts where Ken and Ryu hone their basic techniques while training with their master in the past. These are all great touches.

The problem – or rather, the fact – is that Street Fighter 5 doesn’t have a whole ton of content. The Story Mode is quite laughable with each character completing four fights each and solving conflicts via still-picture cut scenes. It’s weird, to say the least, but at least there’s a unique element to each fighter’s story. Street Fighter 4 simply threw in random battles en route to the same final boss for every character. At least this approach gives each character a personality though it’s admittedly bare-bones and doesn’t help build sympathy for, say, Cammy’s attempt to free the Dolls or Ken’s new life as a father. As it stands, the single-player Story Mode is just a way to earn some quick experience and Fight Money. What about the bonus rounds of car smashing? What about tag-team fights? 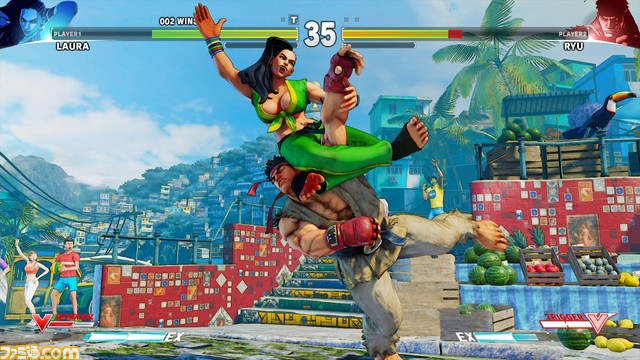 "If you’re new to the series and seek a single-player experience…then you’ll be disappointed by the lack of additional features in the base Street Fighter 5 experience."

That lack of content extends to the Challenge Mode which will be added as a free update in March. Considering that the Trials were the more significant meat in Street Fighter 4‘s single-player component while allowing players to master advanced techniques and strategies, it’s kind of a bust to not see them at launch. Even the Fight Money you earn only seems to apply to the additional characters you can unlock through the story. There are alternate costumes to try out but I was expecting a whole range of goodies to spend Fight Money on. With Survival and Training pretty much rounding out the single-player experience, Street Fighter 5‘s short-term longevity relies on its multiplayer out of the gate.

Thankfully, the multiplayer aspect is incredibly solid. You can set search parameters for the kinds of connections you want to face, participate in Casual and Ranked matches, leave yourself open to challenges from any one – thus allowing you to continue the Story Mode as such – and customize a whole range of Battle Settings. These include the default character you’ll be taking in, his or her costume and so on. The experience itself was incredibly fluid and I managed to find matches quickly.

If you’re walking into Street Fighter 5 for the opportunity to challenge opponents around the world, then make no mistake. This is your jam and it’s backed by excellent visuals, reliable online performance, a balanced yet unique roster and great gameplay. If you’re new to the series and seek a single-player experience, perhaps like Mortal Kombat X with its Challenge Towers and in-depth Story Mode, then you’ll be disappointed by the lack of additional features in the base Street Fighter 5 experience. Nonetheless, its multiplayer is worth sticking around for. If you seek a compelling fighting game which will only get better with time, then Street Fighter 5 will reward your time and commitment. We’ll see how the Daily Challenges, Trials and such pan out when Challenge Mode arrives next month.

Well-balanced and diverse roster of characters. Easy to learn but difficult to master V-Gauge opens up new possibilities. Beautiful visuals and audio design. Smooth controls and response. Despite limited exposure to the same, multiplayer experience was solid and reliable.

Story Mode is a joke with four fights per character and lackluster cut scenes. No Challenge Mode at launch. Fight Money doesn't seem to have function outside of purchasing DLC characters. Lack of different modes.

Street Fighter 5 is as stoic and reliable as ever, right down to its character balance and network performance. Though Story Mode is underwhelming and there's a noticeable lack of content, its gameplay is still stellar and worthy of any fighting game fan's time.

A copy of this game was provided by developer/publisher for review purposes. Click here to know more about our Reviews Policy.
Tagged With: capcom, pc, ps4, Street Fighter 4, Street Fighter 5