Some may grumble about yet another beat ’em up being released but for the 25th anniversary of Street Fighter, Capcom has decided to throw one hell of a party with the launch of one of the most-anticipated crossover games EVER. Street Fighter X (pronounced “cross”) Tekken is here. 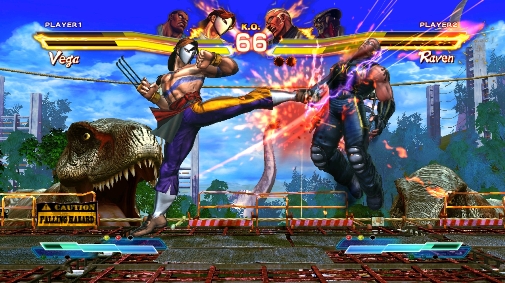 Kick, punch, it’s all in the mind

We know many of you won’t really care about the plot… you just want to dive straight in and crack some skulls, right? Nevertheless, there is a story packed in there, which revolves around the appearance of a strange object after a meteorite crashes to Earth. The projectile, Pandora’s Box, turns out to be all kinds of powerful and everyone wants a piece of it.

The latest game sees the Tekken characters transferred to the 2D world dominated by the Street Fighter games since 1987. Some of the biggest and baddest combatants from each franchise finally come face to face – 19 from each in fact, making it the largest roster in any Street Fighter game!

The likes of Zangief, Dhalsim, Guile and the chunky-thighed Chun-Li are all there, ready to take on an equally strong lineup from Tekken. Kuma makes an appearance, along with King, Paul, Law and Heihachi. For fans of either franchise, you’ll no doubt feel like a kid in a candy store. 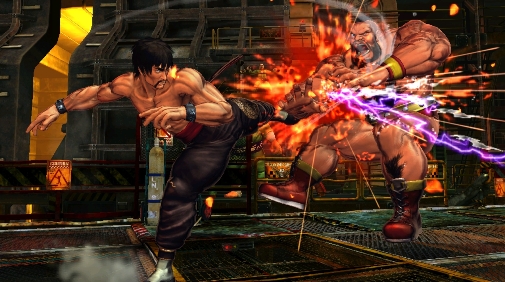 All your favourite Tekken and Street Fighter characters are here

And it’s a good thing there are so many characters on offer as you get to pick two of them at a time for 2 vs 2 fights. During a bout you can switch between fighters for a fresh health bar and a new repertoire of moves. However, bear in mind that it only takes one of your characters to be KO’d for the battle to be lost. The tag element works really well and allows some stunning combos to be pulled off. Also inspired by Tekken, the juggle system allows characters to be hit several times in the air.

Obviously, everything feels very familiar, and it all looks similar to Street Fighter IV. As ever, the action fills every pixel on the screen and as you fight, those renowned background animations really enhance the varied – and often slightly surreal – environments. Pulling off a spectacular combo or one of those trademark moves looks absolutely awesome. There’s nothing more satisfying than chaining together a ridiculous number of hits before your opponent even lands a punch, and that throbbing “KO” indicator appears, declaring you victorious!

Get to grips with the six-button controls, and the three-part bar – the Cross Gauge – at the bottom of the screen fills as you attack or get hit, eventually allowing you to pull off some devastating special moves. Another cool addition is the Pandora move, which allows you to sacrifice one of your characters when they have less than 25% of their energy left, to give your remaining fighter a 10-second power boost and a full Cross Gauge.

Gems allow novices to put up a decent fight too

The other innovation of note is the Gem System, which allows customisation and lets you strategise. There have been some murmurings of discontent from diehard fighting fans but these gems don’t impede the game too much and actually make it far more accessible for newbies. It’s great for the less experienced player, and means that they won’t necessarily get absolutely pummelled during each fight. There are 57 Gems in total, 5 Assists and 52 Boosts – so various combinations can be assigned to strengthen your fighters and make them even tougher to beat. Some fans may snub their nose at them but it certainly makes the fights much more even.

The Assist Gems are there to enhance your skills. Not too great at defending yourself or pulling off a special move? Assign a gem or two and you’ll suddenly become more than capable. It’s a great addition as it allows you to learn new skills and not be penalised if you can’t get to grips with certain aspects of the game. Boost Gems, meanwhile, offer power ups for a limited time depending on certain criteria being met during a match – meaning they activate should a specific attack be unleashed, for example.

The tutorials have been beefed up considerably too – and now there are loads of screens and guidance to help you get to grips with your preferred fighters.

Besides the usual Arcade mode – which centres around the discovery of Pandora’s Box, several other options are on offer too. There’s the classic Versus mode as you’d expect, Scramble mode – a kind of free-for-all where both members of each tag team battle at the same time – and Challenge, which requires you to complete certain objectives. Then there’s the Online mode and we had no problem finding new challengers. The new Briefing Room feature also allows players to train together online so they can form a cohesive partnership, which is pretty cool.

Street Fighter fans will no doubt relish the new challenges and all the new characters on offer. It’s a fitting release for the 25th anniversary of one of the greatest ever beat ’em ups. Tekken aficionados may be a little less enthusiastic about the crossover, largely because the 2D setting does feel quite different to what they may be used to. 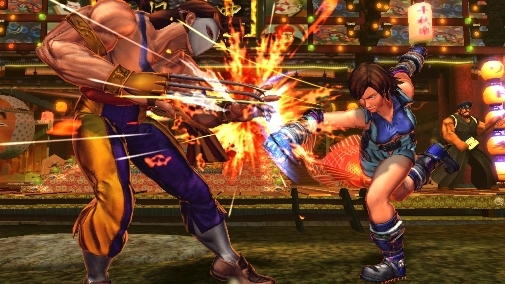 This is the crossover most fans have been waiting for!

Whatever your preference, this is a solid title – and offers something suitably different from all those other updates and DLC that we’ve been seeing of late that simply adds a few characters to the roster. The Gems and tutorials mean it’s easier to grasp for beginners, while there’s plenty to grab the attention for the more capable player.

Namco is said to be planning its own crossover, Tekken X Street Fighter, so it will be interesting to see which comes out on top. For now though, this is a great addition to anyone’s collection.

Huge roster, great graphics, plenty of replayability and numerous game modes should keep you button mashing for some time to come

Tekken in 2D? Some fans won't be convinced. And the Gem System will no doubt annoy the hardcore. Arcade mode isn't very long and will probably have limited appeal

Final Verdict:
SUPERB
All your favourite characters from Street Fighter and Tekken together on one shiny disc... this is the ultimate crossover for fans of either series
A copy of this game was provided by Developer/Publisher/Distributor/PR Agency for review purposes. Click here to know more about our Reviews Policy.