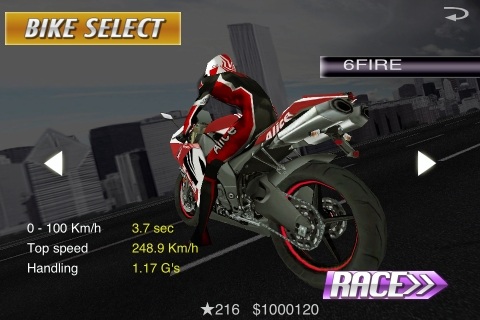 Okay, look. I love bikes. Yeah, the love goes all the way back to the Roadrash days; the nifty little bike game that was all the rage back then. So when I got the review code for this game, I was elated. Why shouldn’t I be? Considering the powerful hardware of the iPad and iPhone, the game should outclass Roadrash, right? Well, it fails to do that.

But, I ended up spending a lot of time on this. There is something about these bike racing games that tends to make me enjoy them a lot. You could be the same. You could love these bike games as well, and if you are, then you may have already bought Streekbike: Full Blast.

The game is for iPhone 4 and iPod Touch, but I played it on the iPad 2, like I always do with such games. I’m glad to say that the scaling works well, and it manages to fill up most of the screen. But the visuals are extremely poor. Now, there was no reason for this to happen, because as I mentioned earlier, the hardware is very powerful. So ultimately it looks like a really budget game for the iOS.

And the game is made by Chillingo, so it’s even more baffling why they didn’t put in an extra effort on the visuals. It’s normal for the gameplay to be shallow, but here the controls are very good. Very responsive. So whether you tilt or press the onscreen buttons, it works. So that’s a good thing. 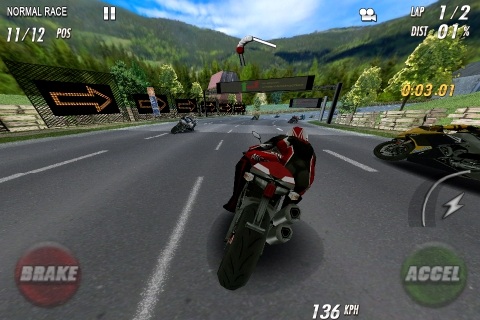 There aren’t that many things you do while racing though. If you hit, you crash, and if you don’t you just turn left or right using the iPad’s sensors and the sense of speed is good. I think that’s what makes it a bit fun, as it is sort of decent when it comes to the actual racing part. The game is cheap though, costing just 0.99$, which is a lot less than say, Real Racing 2 HD or games like that. So due to this, can the visuals get a free pass?

I personally wouldn’t give it a free pass because, come on, how hard is it anyway to make it look decent? The visuals are taken straight from the PlayStation era, so that’s really disappointing from Chillingo. You race in city circuits, and face a lot of traffic, and it’s easily predictable. The opponent AI is not worth mentioning here, as they just race without any care in the world. There are some different tracks, but most of them are unremarkable, but hey, what do you expect?

Ultimately, if you love bike racing, then by all means get it. It’s not a must buy game, but for 0.99$, it can give you a little bit of fun, as the controls are quite responsive. There is almost nothing in the game that stands out, but as I said, it’s a good game if you want to spend time fast while waiting for something or someone, or a train, or a plane. You know that sort of stuff.

Final Verdict:
FAIR
Ultimately, if you love bike racing, then by all means get it. It's not a must buy game, but for 0.99$, it can give you a little bit of fun, as the controls are quite responsive.
A copy of this game was provided by Developer/Publisher/Distributor/PR Agency for review purposes. Click here to know more about our Reviews Policy.