Sunset Overdrive is a crazy new IP under development at Insomniac Games. The upcoming open world action third-person shooter video game is set in the fictional Sunset City in 2027. The city is now controlled by the corporation FizzCo. Players takes control of super dude John who needs to clean up the mess left behind from FizzCo. Featuring agile combat, wall running, zip lining and all the crazy stuff you can expect from Insomniac, Sunset Overdrive is turning into a force to reckon with this Fall.

GamingBolt caught up with the game’s lead writer John Paquette and brand development director Ryan Schneider to know how Sunset Overdrive is shaping up.

Leonid Melikhov: Sunset Overdrive looks pretty good. However, how big is the map size compared to say something like maybe inFamous or any other open-world game?

John Paquette: I think its comparable to any other open-world game. We have a lot of area to cover and the missions will take many hours to complete.

Ryan Schneider: One thing that’s important to keep in mind is that with an open world game, often times you’re talking about what you could do on the ground, sometimes you’re talking about maybe flying or whatever. But, our world is highly vertical based as well. So, it’s not just that it’s a big world across the world. You can get to massive heights in our world as well and that’s how its meant to be played, there are multiple levels and it takes a certain amount of skill to get to each level, so vertically and horizontally it’s a massive game.

"If you play the game and see the experience, we are pretty comfortable where we are in terms of frame rate and resolution wise. We rather just focus on optimizing what you can see on the screen and that we think will create a better experience overall."

Leonid Melikhov: What about the crazy weapons that the game is going to have?

John Paquette: There are a bunch of crazy weapons. We have this weapon called TNT Teddy Launcher, it’s basically a teddy bear with dynamite strapped to it that you fire at enemies, so it’s cute and dangerous. We have a weapon called Captain Ahab, which is this harpoon that shoots out some overcharged when it lands, and Overcharge in our game is an energy drink that caused everybody to turn into mutants.

These mutants, that’s all they want now in the world is they want more Overcharge. When you shoot this weapon into the ground, it creates this puddle of Overcharge and it draws in the OD which then allows you to take them out using a variety of our weapons.

Leonid Melikhov: How has the latest update to the Xbox One SDK helped matters?

Ryan Schneider: For us it’s really more about pushing the number of characters on the screen and particles in the game. If you play the game you will see there are a lot of things that are happening on the screen. It really is great to be supported by Xbox. One really cool thing that the platform [Xbox One] enables us to do is seamless transition between single player to multiplayer. All you have to do is hop into the photo booth of the game and boom…you are in multiplayer. We are very grateful to be partners with Microsoft as an Xbox One exclusive

Leonid Melikhov: Can you guys confirm us the resolution and frame rate?

Leonid Melikhov: Will there be a future update for 1080p?

Ryan Schneider: If you play the game and see the experience, we are pretty comfortable where we are in terms of frame rate and resolution wise. We rather just focus on optimizing what you can see on the screen and that we think will create a better experience overall. 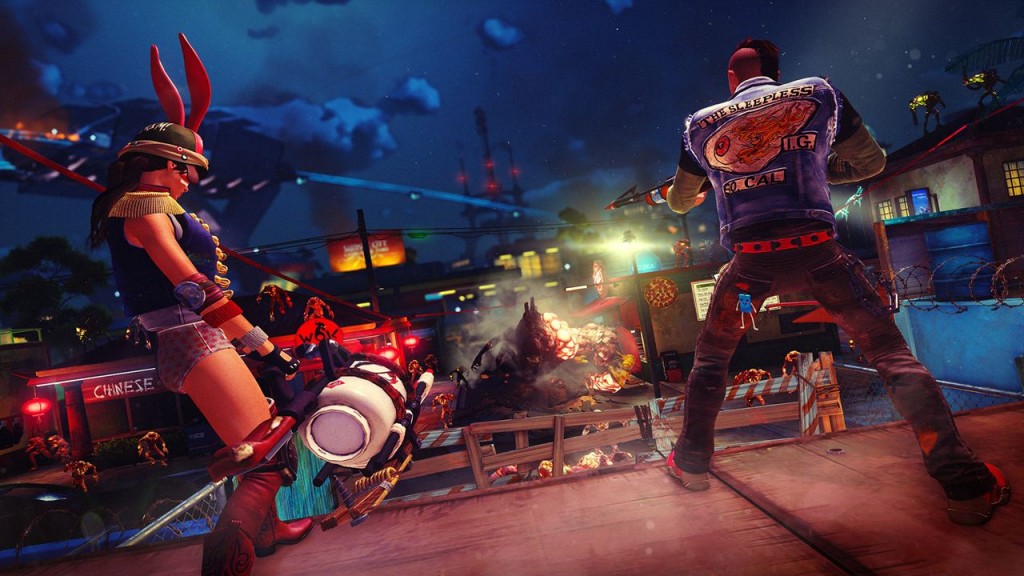 "We do have quests in the game, we're not talking about specifics of the quests but there are main missions that you can play throughout the game. There are a bunch of side quests as well."

Leonid Melikhov: With the Kinectless Xbox one will the game use that extra power in anyway?

Ryan Schneider: We are certainly going to be looking into that and ways to optimize but again the emphasis is on a big, grand spectacle along with unprecedented amount of stuff happening on screen and making sure frame rate does not suffer.

Leonid Melikhov: How long will the main campaign be, in terms of hours?

John Paquette: Yeah we don’t have a certain… I mean..depends on how good you are. It’s definitely comparable to other open world games.

Leonid Melikhov: Can you tell us about different side missions?

John Paquette: We do have quests in the game, we’re not talking about specifics of the quests but there are main missions that you can play throughout the game. There are a bunch of side quests as well.

Leonid Melikhov: You guys recently mentioned “8 player co-op” would you care to tell us how that might work?

John Paquette: It’s crazy. Imagine one player experience with all the effects and all the traversal going on, put 7 other people and 7x the enemies.

John Paquette: Right, in the game you can find a photo-booth and when you go in there and hit a button and then you plot right in there with your friends into a multiplayer match. We call it a “Chaos-Squad”.

Ryan Schendier: One thing just to add to that. Our multiplayer, the way that it works is you’ll be voting on missions and mission types. The more difficult missions you vote on to participate in, the higher the rewards will be when you culminate into something called “Night Defense”.

All 8 of you are working together to defend these vats of Overcharge from incoming waves of OD. When you complete that final culmination the rewards that you get from that experience, you could take back with you into the single-player game. It’s really important to keep in mind that this is a broad multiplayer experienc with lots of different levels to it. 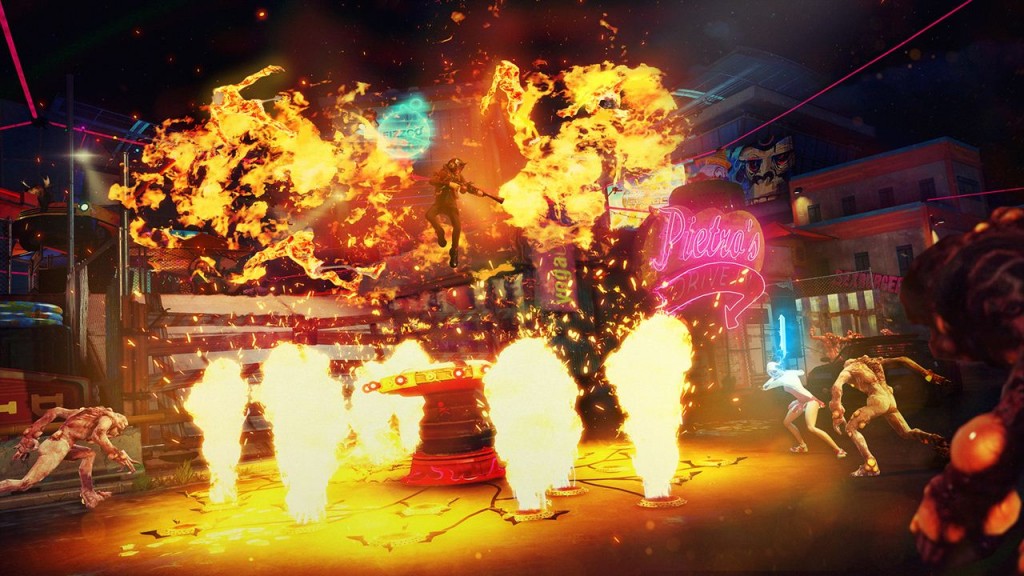 Leonid Melikhov:  Can you talk about the different skills and abilities that the players can unlock?

Leonid Melikhov: Are you guys gonna be expanding the game in the future? Maybe DLC packs or extra multiplayer modes or things like that?

Ryan Schendier: Sunset Overdrive is gonna have a very long shelf life. We have a community team in-house that helps with extending the content. We gonna have something called Sunset TV that’s gonna tell players about all these updates that’s happening with the game that you’ll be able to actually watch inside the game itself. In addition to having like the standard DLC that you can expect in an open world game, we’re gonna be looking at working with the community to expand our offering constantly and listening to feedback and trying to incorporate it.

Leonid Melikhov: Last question, are you guys making this game as a franchise? Perhaps a sequel?