Microsoft finally gets their platformer.

The first video game I remember playing was a platformer: Super Mario Bros. 3 on the NES. It wasn’t my console; I played at a friend’s house. I was very young, no more than 7. My parents wouldn’t allow video games into the house for another few years and the jury’s out on whether that was a good decision or not. Mario is synonymous with Nintendo and gaming as a whole, but for a very long time, every platform maker had its platformer, and each carried a mascot into the consciousness of everyone who enjoyed games.

Nintendo had Mario and Banjo-Kazooie, Sega had Sonic, Sony had Spyro and Crash Bandicoot and later Jax and Daxter and Ratchet and Clank but Microsoft… well, Microsoft was the exception. It wasn’t for lack of trying. The list is long: Blinx the Timesweeper, Azurik (I bet you forgot all about that disaster, huh?), Voodoo Vince, I-Ninja, Kameo… the list goes on. They weren’t all bad games, or bad ideas. Blinx and Kameo in particular have seen something of a critical re-evaluation in recent years. But none of them caught on at the time, and of all of them, only Blinx received a sequel.

But every couple of years, Microsoft tries again. Fortunately, their latest attempt might be their best. Super Lucky’s Tale is technically an indie game, but you probably wouldn’t know it by looking at it. Developer Playful Corp. has gone all out here, delivering a full-fledged, charming, and fun platformer at a budget price. Like most platformers, Super Lucky’s Tale has a simple set-up. When it starts, he’s waiting for his older sister Lyra to come home, dreaming of the day when he can set off on his own adventures. 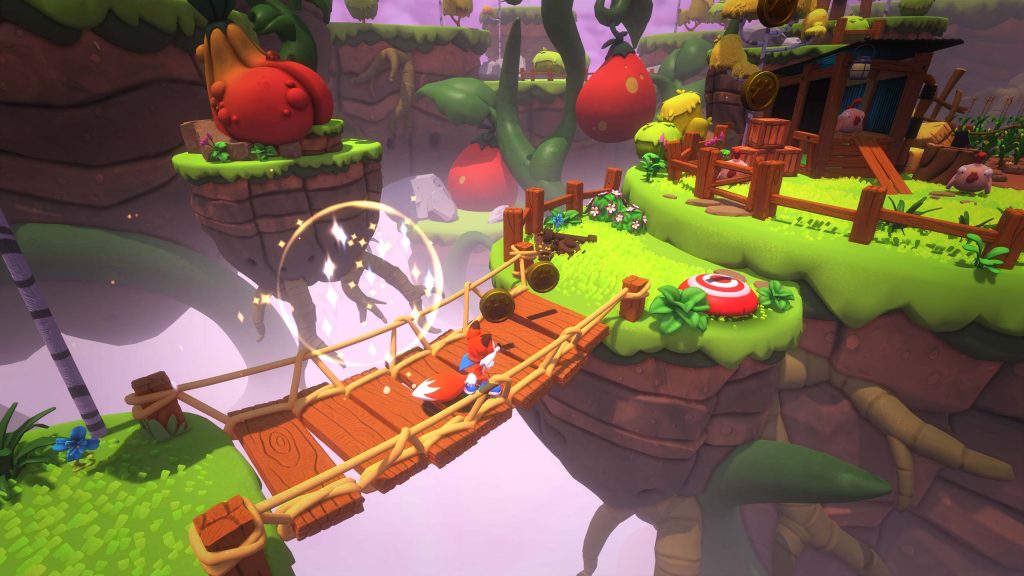 "What really sells it is the writing. It feels odd to say that about a platformer, but Super Lucky’s Tale is genuinely joyous and funny."

Lyra’s a Guardian, a fox tasked with protecting the Book of Ages, and Lucky desperately wants to be one, too. When Lyra returns with the book, she’s not alone – she’s being pursued by Jinx, a mysterious cat villain who wants to use the book’s power to reshape the world. Jinx is aided by the Kitty Litter (this is a platformer. Cute puns abound), his mischievous kids who are not really all that great at this whole “being evil” thing. The group ambushes Lyra and Lucky, and while defending his sister, Lucky is sucked into the book. The problem is that Jinx and the Kitty Litter are sucked in with them.

To protect the book, Lucky has to free the various worlds within from the Kitty Litter’s control, and somehow find a way out of the book and back to his sister. It’s a simple set-up, but it works here. What really sells it is the writing. It feels odd to say that about a platformer, but Super Lucky’s Tale is genuinely joyous and funny. Master Mittens, the Kitty Litter’s ninja, often pontificates on the benefits of Mew-shu (yes, that’s what it’s called) and how his code requires that he give Lucky tests to pass before they can fight. Tess, the group’s tinkerer, yaps about her latest invention and always lays out her evil plans for Lucky at the beginning of each stage.

The best part is that these characters aren’t inherently mean. They give Lucky a chance, and any violence that takes place isn’t permanent. Your battles with them feel like more of a lighthearted gag than a life or death struggle, and the game is better for it. It makes the game lighthearted and fun. Even the background characters get in on the action. Friendly worms wear cowboys hats and sport Sam Elliot mustaches, speak in Southern accents, and crack wise about their stubby arm nubs, while a mother badger complains about her unruly children. There’s even a sense of joy in the mechanics, as Lucky laughs infectiously when he does something particularly impressive. Yes, this is a game for kids, but it’s a joyful one that can be enjoyed by anyone who misses platforming’s golden age. 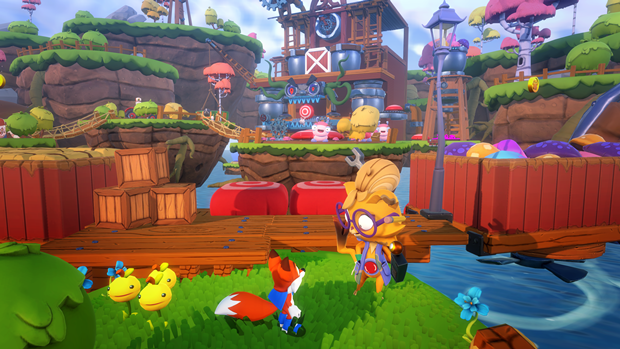 "The easiest clovers to get are the ones tied to a level’s objectives, while the optional ones are much harder. You have to complete the main objective of the first level in a land to unlock the next one and so on, but everything else is optional."

Charm doesn’t matter if a game doesn’t play well, but Super Lucky’s Tale does. It’s fairly basic: you’ve got your double jump, spin attack, and ability to pick up and carry items. What makes Lucky unique is that he can dig underground, which he can use to travel, collect items, avoid damage, bypass obstacles, and attack enemies. All of these abilities are tuned well, and after the exploratory learning curve that accompanies all platformers, you’ll realize you’ve got all of the tools you’ll need to tackle everything the game throws at you.

And it throws stuff at you. The set-up is similar to the older Spyro games. You’re dropped into a themed land filled with portals that take you to various smaller levels. The lands are dotted with coins to collect and things to do, but the real point of the game is to grab clovers, which can be used to unlock more levels. They’re scattered through side missions in the lands, but the levels are the real way to get them. Each has four: one for completing the level’s objective, one for collecting 300 coins, one for completing a secret objective, and one for finding each of the letters of Lucky’s name, which are scattered throughout each level.

The nice thing is the levels are designed to be as easy or as hard as you want. The easiest clovers to get are the ones tied to a level’s objectives, while the optional ones are much harder. You have to complete the main objective of the first level in a land to unlock the next one and so on, but everything else is optional. Yes, you’ll need to complete some of the optional objectives to gain the number of clovers you need to face a level’s boss, but how you do it is up to you. 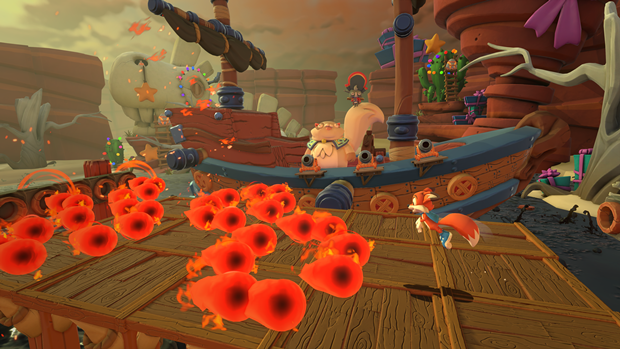 "The game’s gorgeous. Animations are smooth and everything is bright and colorful, like the best platformers of old."

This system makes for repayable levels that adapt to what you choose to do. Low on lives and feeling stressed? Stop chasing the optional objectives and focus on the main one, or head back out into the land proper and collect some coins so you can grab another life. You could also had back and do some optional missions, which range from solving puzzles to navigating a maze and collecting coins after Tess shrinks you down into a marble for study. Super Lucky’s Tale wants you to play it on your own terms, and no matter how you choose to play, it’s designed to be fair, precise, and fun. If there’s one downside, it’s that the bosses, while fun, follow the old “hit them three times” rule, which is a bit played out.

Still, the game’s gorgeous. Animations are smooth and everything is bright and colorful, like the best platformers of old. The sound design also puts in admirable work here, communicating danger and how you’re interacting with your environment, while providing character to Lucky and the surrounding areas. If I have one complaint here, it’s that the lighting sometimes feels off, and perhaps a bit too static, but this is a very minor qualm in a game this good.

How you feel about Super Lucky’s Tale will depend on how you feel about platformers. If you look for charm, whimsy, and tight gameplay, this is a game you’ll love. It’s not innovative, but its old-school nature, precise mechanics, joyous feel, and beautiful game world evoke wonder and fun. This is how platformers were meant to be, and finally, Microsoft seems to have found theirs. Let’s hope Lucky gets to come back for more.

Gorgeous art design. Genuinely funny and full of joy. Great level design that lets you choose what you'd like to do. Likable characters. Great mechanics.

Bosses follow the old “hit them three times” rule. Lighting looks off in some areas.

Final Verdict:
GREAT
Super Lucky's Tale is a funny, joyous game with excellent mechanics and great characters. Microsoft has finally found their platformer.
A copy of this game was provided by Developer/Publisher/Distributor/PR Agency for review purposes. Click here to know more about our Reviews Policy.