Rather than fading away like a fad, as many expected, battle royale has mutated and evolved and proved its resilience by becoming something more than the “genre” or “mode” many may have originally expected it to be, and becoming a concept instead. The concept of a game, any game, where death is permanent, and the last man standing wins. And that’s why, for a trend that started with survival shooters such as Fortnite, we are now getting experiments as wacky and off-beat as Fall Guys, or Tetris 99. Super Mario Bros. 35, a time limited title Nintendo is releasing to commemorate the 35th anniversary of the original Super Mario Bros., is the latest of these off-beat battle royale experiments.

But while Fall Guys and Tetris 99 are both resounding triumphs of clarity of concept and execution, Super Mario Bros. 35 is less so. It is fun – the original Super Mario Bros. game is still compelling today, and when you throw in the pressure of a battle royale game and trying to stay ahead of your opponents while not rushing and committing a fatal mistake, it becomes even more so. However, the inherent problems of marrying a modern multiplayer game format to a singleplayer linear platformer from more than three decades ago, cause several problems here that are otherwise not present in Nintendo’s own Tetris 99 for example.

"However, the inherent problems of marrying a modern multiplayer game format to a singleplayer linear platformer from more than three decades ago, cause several problems here that are otherwise not present in Nintendo’s own Tetris 99 for example."

The pitch here is almost identical to Tetris 99 – it’s Super Mario Bros., but battle royale, with you facing off against 34 other players. You’re all playing through the levels, which are almost identical to the original, on very tight time limits. Any time you clear and obstacle or kill an enemy, you send it into one of the other players’ games. You also get small time boosts each time you kill something – both of which incentivize not just lazing around at the start of the level waiting for everyone else to die.

There are a few other changes: dying once, of course, means that you’re out. Collecting coins eventually grants you a random power up, while it also goes towards your overall total of coins. As with any multiplayer game, there is a metagame linked to your profile, with you unlocking more customization options for yourself the more you level up (which, in turn, you do by playing and doing well). There are even time-limited special battle modes, that mix up the rules for each level, and a practice mode. Plus, playing unlocks more and more levels, which means you can vote on them at the start of the game.

That change actually brings us to one of the issues of Super Mario Bros. 35 overall, but let’s start from the beginning on this. One of the reasons that a successful battle royale game remains engaging on repeated playthroughs is because it offers variation in each new game. Even when the map is the same, like in Fortnite, each game plays out differently, based on nothing but the players you are matched with, and how they play. 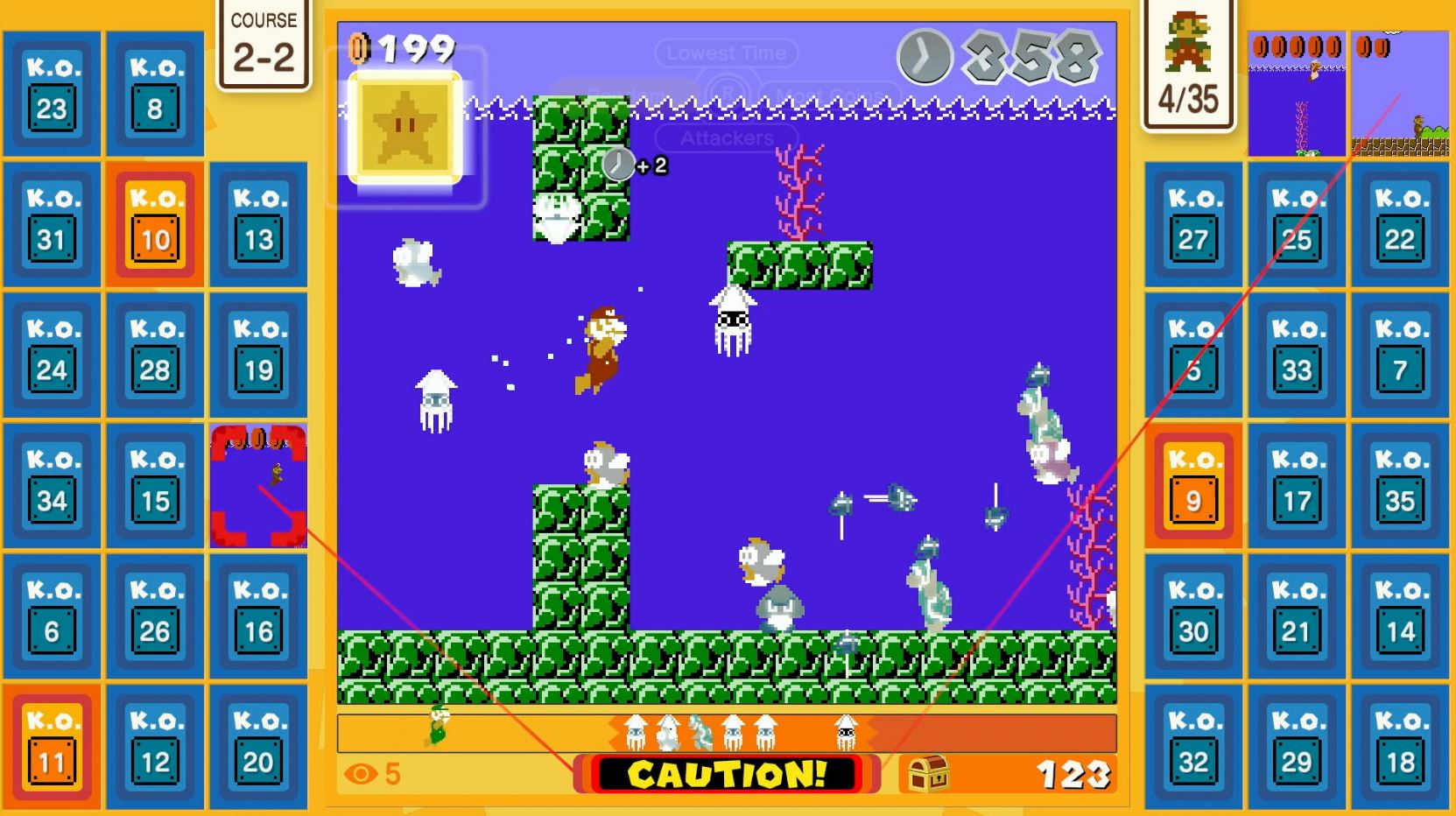 "The pitch here is almost identical to Tetris 99 – it’s Super Mario Bros., but battle royale, with you facing off against 34 other players."

It appears as though the developers had an insight into this problem, because one very cool thing they did is allow players to vote on which stage will be played at the start of the game, with the winner being chosen at random from the votes. The problem is, to be able to vote for a level, you have to unlock it first. This means that for a while, and really, in general, you are going to be seeing a lot of the early levels in the game – particularly World 1-1 and World 1-2, because those will be the ones that most players will have unlocked. This can further exacerbate that feeling of repetition that I have been talking about.

These problems do admittedly hold Super Mario Bros. 35 from achieving the greatness that the pitch of “Mario, but battle royale” might otherwise evoke’ however, in spite of these problems, Super Mario Bros. 35 is fun and engaging, if with caveats. One part of this is because it works on the same level as watching a speedrun of the game, for example – it is inherently fun trying to balance just blazing through the level as fast as you can, and getting ahead of the obstacles the other players will throw your way, with trying to score more coins and points as well, and trying to slow the other players down by sending as many obstacles their way as you can. It’s fun, because Super Mario Bros. 35 remains fun. Though, again, the fact that you are playing with only one life (because this is a battle royale, obviously) and that the levels are often full of enemies that they were not designed or balanced around, means that you will often only be adding further to the sense of repetition that already plagues this game in other places.

That’s where the caveat comes in – Super Mario Bros. 35 is actually a lot of fun, but in very small doses. The more you play it, the more the repetition sets in, and the easier it is to just burn out on the game. Playing a few rounds on the quick is basically the ideal format for this game; thankfully, its quick matchmaking and loading facilitate easy jumping into the game, even if you’re booting up from scratch. The netcode is surprisingly stable as well, arguably more so than many full priced flagship Nintendo games. 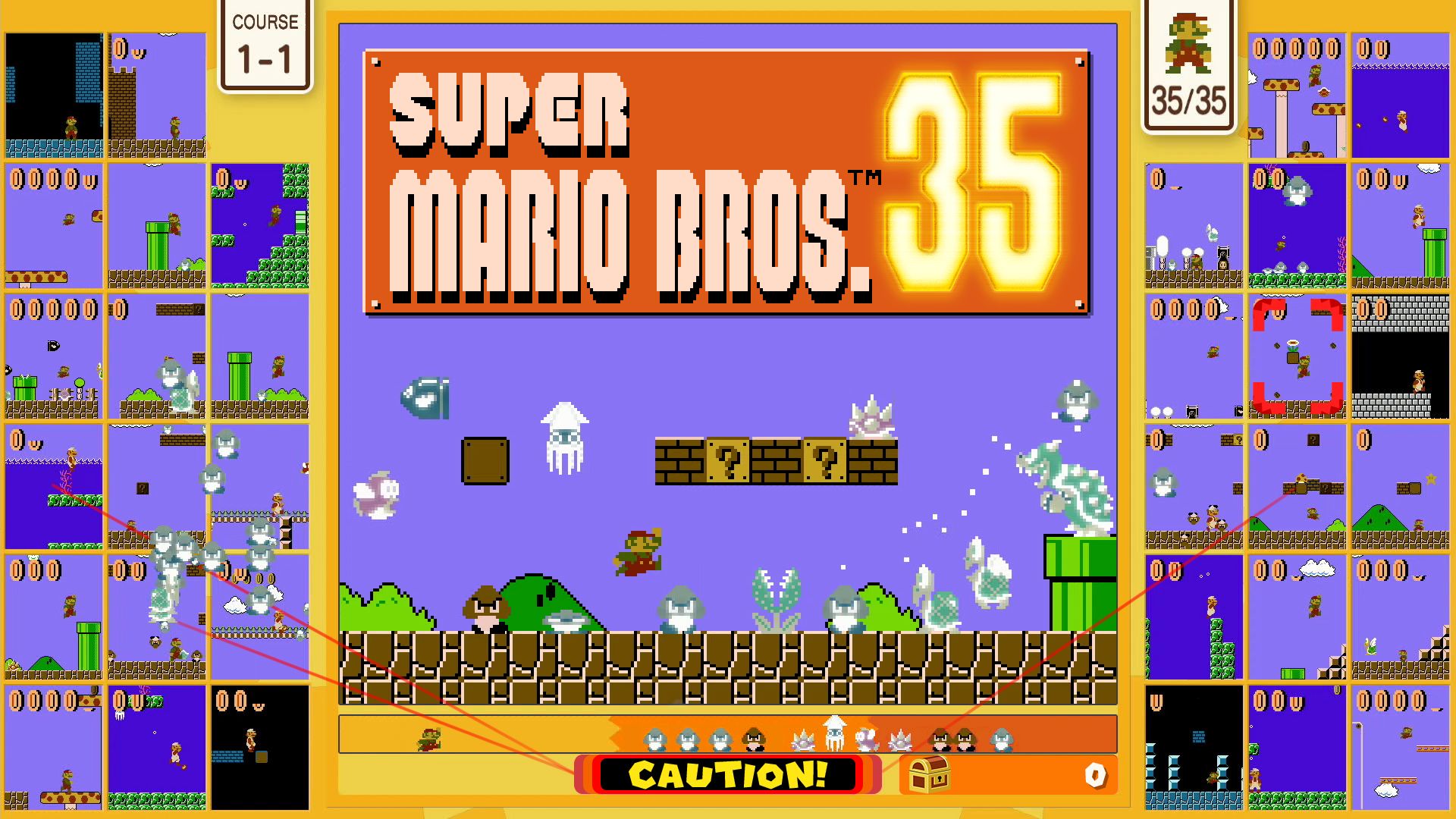 "The problem is, to be able to vote for a level, you have to unlock it first. This means that for a while, and really, in general, you are going to be seeing a lot of the early levels in the game – particularly World 1-1 and World 1-2, because those will be the ones that most players will have unlocked."

With the whole bevy of issues and shortcomings with this game that I have raised, it is hard to actually take too much issue with it, because it is very literally free. And not free in the free-to-play sense, where you have ways to spend money on the game in-game. It is literally free with no monetization, as long as you are a subscriber of Nintendo’s Switch online gaming service. It’s totally fine for what it is, which is a free, time-limited celebration of an older game. And while that doesn’t negate the flaws, it at least contextualizes them a little bit.

There is, of course, an inherent appeal to a full-fledged Mario battle-royale game, and maybe one day we will get to see that. Super Mario Bros. 35 is not that, and once you accept that, it is easier to enjoy it for the flawed game that it is, in short doses. Coming into this review, I had expected my biggest criticism to be for this game’s time related nature, questioning why Nintendo would do that at all; now, after having player Super Mario Bros. 35, I think I understand why. It is a game that remains fun, but can outstay its welcome very quickly. Best to quit while you’re ahead, then, so that people can remember you more for being fun and unique.

Super Mario Bros. is a fun game, and playing through it with added battle royale elements remains inherently engaging; the game has a thrill to it similar to trying to speedrun levels; it's free for Nintendo Switch Online subscribers

There is a lot of repetition, from the linear and static nature of the game to the fact that a lot of the games will take place on the earliest levels repeatedly; you sometimes end up with enemies or power ups in levels that aren't designed for them, trivializing them a fair bit

Final Verdict:
FAIR
It still remains fun on some level, because Super Mario Bros. is fun, and battle royale games are fun. But some poorly thought out decisions lead to this hobbled from reaching the potential that a Mario battle royale game might otherwise be able to achieve.
A copy of this game was purchased by author for review purposes. Click here to know more about our Reviews Policy.