2016 will always be remembered as an important year in Nintendo’s history, in that marks their very first major steps into the mobile gaming landscape. They made a memorable, momentous entry onto the stage and took the world by storm with Pokémon Go, and they’ve decided to follow it up with another one of their heavy hitting franchises- Super Mario. The question here is, does this mobile version of Super Mario work as well as everyone hoped? Does Super Mario Run do the franchises it originates from justice? The answer is a resounding yes. Super Mario Run is another excellent step forward into the mobile gaming scene for Nintendo, maybe even more so than Pokémon Go, since Run captures the core essence and spirit of the Mario franchise almost to perfection.

Perhaps one of the most striking aspects of Super Mario Run is how just how much content it has on offer. While the game is, when you get down to its very core, an automatic mobile runner, it is packed with an incredible amount of content, and players can easily spend dozens of hours on it on account of its replayability and solid level design. There’s also the fact that its accessible nature as an automatic runner, and its simple, slick controls that allow you to easily play the game using just one hand, work heavily in its favour, making this a package that is easy to get into but enjoyably difficult to master. 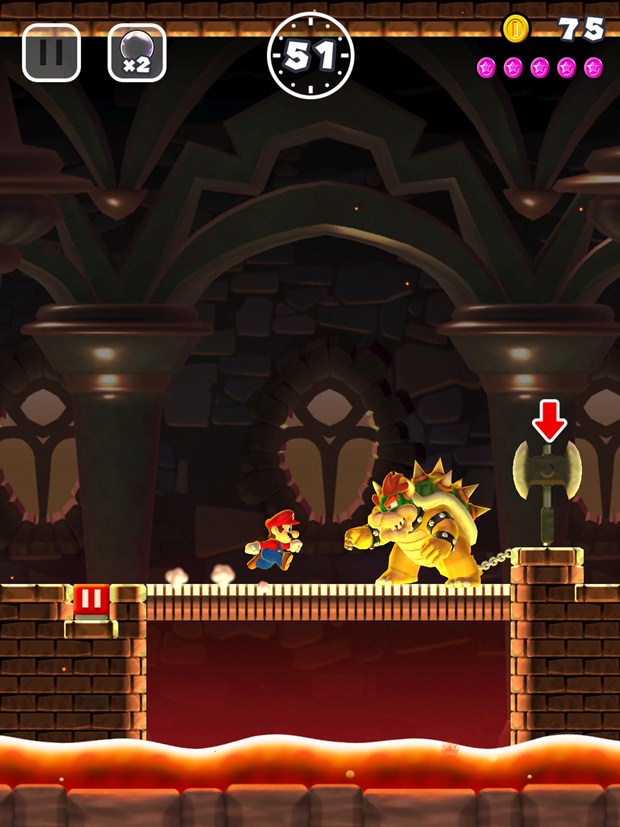 "Super Mario Run still feels very much like a Mario game, and a combination of the slick and solid level design Mario games are known for, and a constant focus on the hunt to collect coins – special and regular – makes this feel like a trueMario experience."

Super Mario Run, in terms of level design and gameplay style, follows the template of traditional 2D side-scrolling Mario games, with a visual pallet that is heavily reminiscent of the New Super Mario Bros. titles to boot. Sure, the levels are shorter, and you no longer have the same amount of control over Mario as you do in the side-scrolling platformers, which means that the game definitely loses some of the genius complexity that is apparent in so many iconic and memorable Mario stages of the past, but don’t let that fool you. Super Mario Run still feels very much like a Mario game, and a combination of the slick and solid level design Mario games are known for, and a constant focus on the hunt to collect coins – special and regular – makes this feel like a true Mario experience.

The controls here are simple and intuitive, and you can basically do everything in the game using just one finger. Mario runs forward by himself, and vaults over small objects and enemies on his own as well, but you control all his other actions. You make him jump by touching the screen, make his jumps higher and longer by holding down on the screen, make him perform summersaults, and can even control his trajectory and speed as he falls downwards.These controls, as we’ve already established, are pretty easy to get the hang of, but the real fun begins when you try to gain mastery over them in order to collect the special coins in each of the stages.

And these special coins are, ultimately, the real hook of the game. The main campaign itself is fairly short. It consists of 24 stages, and it’s fair to say that it doesn’t take too long to beat them all. However, each of these stages has five special coins that are placed just out of reach, and collecting these special coins requires players to perform and string together perfect moves. Upon collecting all five special coins, you unlock another set of five more coins, which are even harder to collect, and as if that isn’t enough, when you’ve collected those as well, you unlock a third and final set of five more. 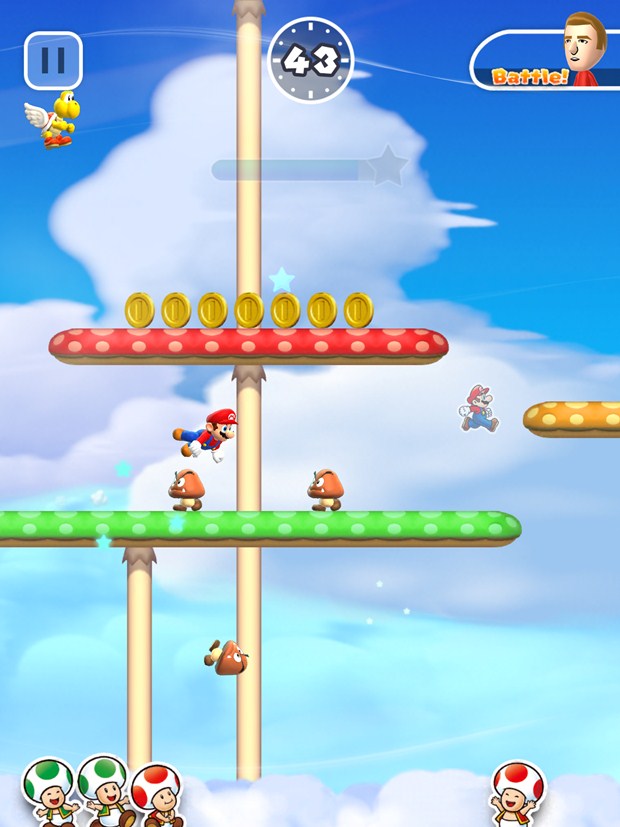 "Kingdom Builder isn’t going to be Super Mario Run’s main attraction, nor was it meant to be (clearly), but it’s a fun distraction, if nothing else, and provides a nice, quiet break from the breakneck, fast-paced running and jumping action that the rest of the game doles out almost constantly."

Collecting these coins is incredibly challenging, yet never unfairly so, and pulling off perfect combos of moves to collect them as they become progressively harder to reach proves to be incredibly satisfying, and this constant hunt for special coins will definitely keep players returning to Super Mario Run again and again.

And there’s even an added incentive for players to collect as many coins as they can, because in Super Mario Run, they serve as actual currency. You use the coins you collect in the campaign stages and other modes (more on this in a while) to create and customize your very own Mushroom Kingdom in the Kingdom Builder mode. It’s not a full-fledged builder like you would expect, though, and maybe that’s to be expected. All you’re ultimately allowed to do is build houses and have Toad residents move in, and the effects of this are mostly superficial. However, as you build more and more of your Mushroom Kingdom, you’ll unlock new characters, which you can use in the campaign.

Kingdom Builder isn’t going to be Super Mario Run’s main attraction, nor was it meant to be (clearly), but it’s a fun distraction, if nothing else, and provides a nice, quiet break from the breakneck, fast-paced running and jumping action that the rest of the game doles out almost constantly.

But wait- there’s more! Super Mario Run also includes a Toad Rally mode, which is essentially a time trial mode with a typical Mario spin on it, in that you have to collect as many coins in the allotted time period as possible. You compete against the ghosts of other players, and if you win, you’re gifted with an increase in population of Toads in your own Mushroom Kingdom, allowing you to, in turn, unlock more items for customization and creation. The competitive aspect of the Toad Rally mode definitely lends it an even greater addictiveness than the campaign itself, and adds to the replayability of the game in general even further. 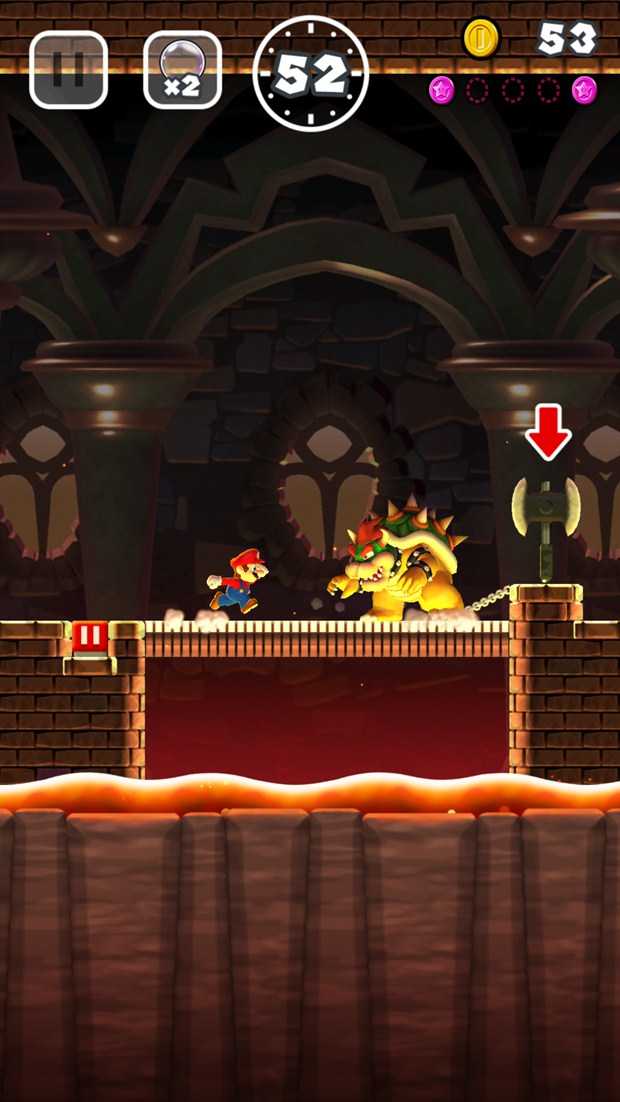 "If you’re a hardcore fan of the Mario franchise, purchasing the entirety of the Super Mario Run experience for the price of admission might be an easy decision, but for anyone else, even with the wealth of content on offer here, that might not be the case."

There is, however, the issue that Super Mario Run requires your smartphone to be constantly online, meaning that if you do not have an active internet connection, you won’t even be allowed to start up the game, much less play it. This feature by itself isn’t that baffling, considering it’s a common occurrence in plenty of mobile games, but when you consider the fact that the game doesn’t include proper player vs player online interaction, or even any real micro-transactions to speak of, it does become a bit of a head-scratcher.

The other real issue is that even though you can play a specific version of Super Mario Run for free, you will only get access to the full-fledged experience for $10, a price that seems especially high when compared to a number of quality platformers and automatic runners on smartphones. If you’re a hardcore fan of the Mario franchise, purchasing the entirety of the Super Mario Run experience for the price of admission might be an easy decision, but for anyone else, even with the wealth of content on offer here, that might not be the case.

When all is said and done, though, Super Mario Run definitely goes down as another impressive Nintendo entry in the mobile gaming landscape. Granted, in opting to become an automatic runner, it gives up the agency and intricate and layered level design of traditional Mario games, but the level design here is strong regardless. Ultimately, recognizable soundtracks, slick animations, nostalgic visual beats and its extremely addictive and incredibly accessible nature all come together to make sure that Super Mario Run does justice to the Mario franchise.

This game was reviewed on iOS.

Captures the unadulterated fun and essence of a 2D Mario perfectly; Addictive and highly replayable; Wealth of content on offer; Accessible and challenging at the same time.

Always online requirement is baffling; $10 for the complete package may seem unjustified to some people; Lacks the intricacy of traditional Mario games.

Final Verdict:
AMAZING
Easy to get into, hard to master, and an absolute blast all around.
A copy of this game was provided by Developer/Publisher/Distributor/PR Agency for review purposes. Click here to know more about our Reviews Policy.