After a rapturous reception on the Xbox 360 last year, non-console owning gamers can now grab an ultra big slice of perhaps one of the most satisfying – and intensely irritating, frustrating and addictive  – 2D platformers of recent years, Super Meat Boy. And believe me, the new Ultra Edition is absolutely huge.

You play as a slab of red meat – the aptly named Meat Boy – tasked with saving his girlfriend who’s been kidnapped. She’s pink and made of bandages (!) and has only gone and been grabbed by the evil tuxedo-wearing top-hatted Dr Fetus. It’s just your run of the mill, traditional tale of romance and adventure really!? 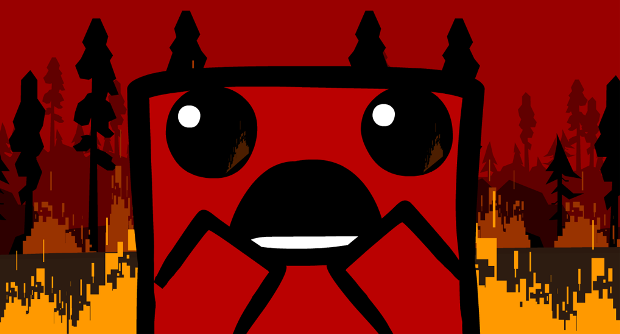 Meat Boy has lost his girl… she’s been kidnapped

Meat Boy must negotiate buzz saws, missiles, lasers, fire and other equally fiendish hazards to make his way to the end of each stage where he’ll temporarily be reunited with his beloved before she is whisked away again. Sounds simple? Believe me, it’s not. In fact, it ranks as one of the toughest and most mind-numbingly annoying games in recent years. But in a good way. Mark my words… you will die A LOT. There’s no shame in it – in fact, it’s almost expected as each stage becomes harder than the last. You’ve got unlimited lives; lucky really as I don’t think there’s a single level where I’ve not died at least five times!!! Thing is, it’s brilliantly addictive.

Fortunately, the developers have ensured that there’s absolutely no delay between each attempt, Meat Boy respawning almost instantaneously at the starting point as soon as you’re squished, churned up or splattered. And just to rub salt into your meaty wounds, you’re presented with a nice montage of all your failed attempts upon successful completion of a level.

The control system is simple and intuitive, which makes bounding your way around such a dangerous world an absolute pleasure. Handy really as intricate, well-timed movements are essential to progress. The keyboard controls are old school, with only jump, run and left/right cursor keys required.  After simple tutorial levels where you get to grips with simply leaping chasms and bouncing off walls, things get tough. Really tough.  And that’s before you’ve even met the various bosses that punctuate the game. 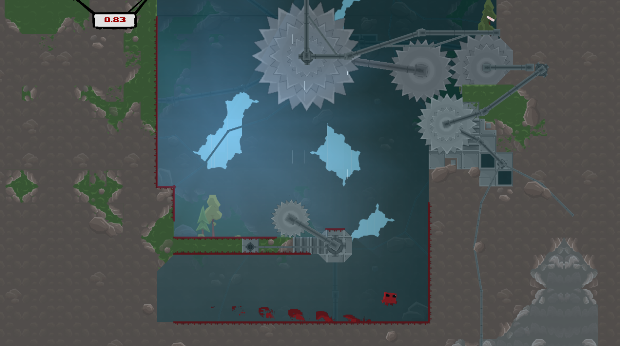 The graphics are fairly basic but you won’t care; they’re functional and anything else would be un-necessary and detract from its retro feel. They’re bright and colourful and perfectly suited to this 2D platforming extravaganza. A particular highlight is the trail of blood and goo you leave in your wake, which remains on the floors, walls and saws until your complete the level – after numerous attempts it’s a veritable bloodbath!

Over 300 levels of gaming goodness are crammed into the Ultra edition disc (accessed via a Steam account so an online connection is necessary) along with level editor, unlockable characters, an MP3 soundtrack, 40-page comic book and a double-sided poster. All in all Lace Mamba has produced a really comprehensive package, with the only slight irritation being that you’re forced to use the Steam download service. 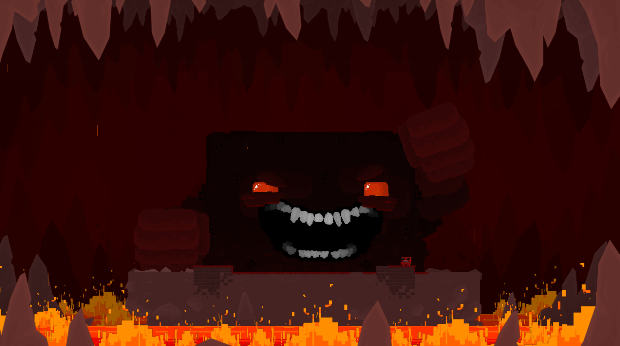 Over 300 levels will keep you coming back for more

It’s an unforgiving game and one that will test even the most dedicated of gamers as well as your poor old keyboard – which I bet will receive a lot of abuse. Warning: this is not a game to play when you want to chill out or relax. You will get angry. You will swear. You may even cry with frustration. But you will keep coming back for more… I pity your keyboard. What you waiting for? Buy it now.

Simple to grasp but takes forever to master. There's loads here to keep you occupied and despite its difficulty, you'll keep coming back for more. Looks good, sounds good and plays amazingly

Installation is annoying and has to use a Steam account even though it comes on disc. Can get hugely frustrating at times... so expect plenty of swearing and keyboard abuse

Final Verdict:
EDITOR’S CHOICE
The acclaimed Super Meat Boy is now available in an awesome package for the PC. Loads of levels, loads of fun and loads of longevity make this a must-have game for everyone's collection
A copy of this game was provided by Developer/Publisher/Distributor/PR Agency for review purposes. Click here to know more about our Reviews Policy.