Supreme Commander 2 is a Real-Time Strategy (RTS) game for the Xbox 360 and PC platforms – available via Steam. It was developed by Gas-Powered Games and published by Square Enix. It is a sequel to the first Supreme Commander (and expansion), and as such is set 25 years after the events in that game, but has many differences from it as well. Graphics are altered, units are merged or replaced, and the research structures have become a centralised research tree. The economy has also been simplified: players cannot queue more units than they have resources for. Instead of unlimited borrowing, your Supreme Commander now has a debit card.

Once again, the single-player mode is split into three campaigns: one for each race – the United Earth Federation (UEF), Cybran and Illuminate (dropping the Aeon prefix from the prequel).  The ultimate aim of each campaign is to acquire a planet-killer super weapon for your faction. The tutorial is split into two stages: one covering basic moves and unit production; and the other more advanced tactics. The plot is advanced by pre-rendered cut scenes between missions and by conversations between the player character and NPC’s. 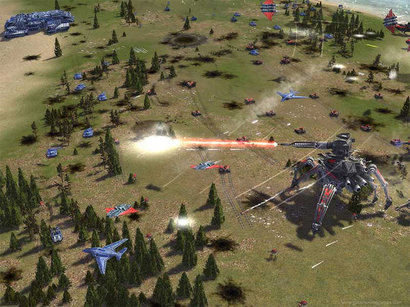 Epic battles are common in the Supreme Commander Universe.

These are accomplished by a communication window which appears in the top-right corner of the screen. As in the previous instalments, the player character is the titular “Supreme Commander”, ensconced within an Armoured Command Unit or ACU. The ACU is a combination über-unit and construction worker – able to wade into combat against otherwise impossible odds and be equally at home building base structures. As in the first game the objective in skirmish/multiplayer is to destroy the enemy ACU(s), but if yours is destroyed, it’s game over.

Units are built from 1 of 4 factories: Land, Sea, Air or Experimental. Experimental units are massively effective against targets, but have a very high resource cost attached. Factories can be upgraded with such additions as Shield Generators (protects against everything but nukes), Missile Batteries, Intel Centres (increasing line of sight), and more. Building units or structures requires resources, in the form of Mass and Energy. Mass Gatherers can only be built on certain sites, but Energy Generators can be built anywhere. Research points are granted over time, and by fulfilling objectives during missions. 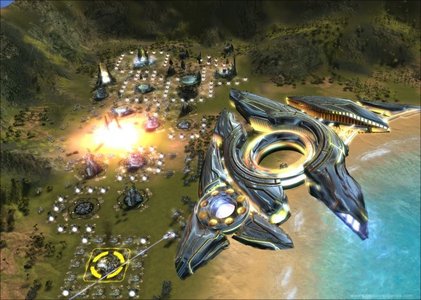 The Experimental Units cost a fortune in research points and resources, but are worth the cost.

The controls are fairly intuitive and on-screen tooltips are helpful without being intrusive. The emphasis on you being in command of your forces lends itself to the rotary interface. The camera can be instantly zoomed out to enter “Tactical Mode” – a satellite view of the entire map and force disposition. Units can be distinguished, selected and directed from this view. Units can also be set to a variety of stances, including Patrol, Attack, Guard and Capture, and this broadens the options open to the player during games.

Graphically, the game is a treat during missions. Textures are crisp and are rarely jagged. Colours are rendered with great clarity and the distinct palettes of each race make it easy to tell your units from the enemy when zoomed in. Sadly, some of the graphics used on the NPC’s during cut-scenes leave a lot to be desired: hair is flat and two-dimensional, faces seem wonky. The plot is paper-thin, and the voice acting doesn’t stand out. The musical score is suitably martial and rousing at turns, but in particular the voice of the instructor grates on the ear. 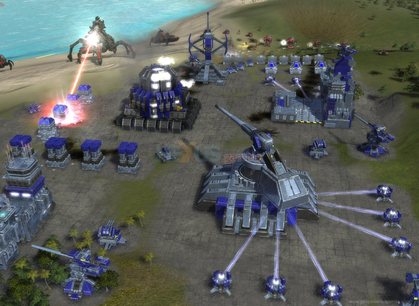 The end-game superweapons are awesome.

Supreme Commander 2 takes the core experience of its predecessor and not much else. A newcomer to Real-time Strategy will find it an excellent introduction before more meaty fare, but Total War this is not. If you are familiar with RTS or were a fan of the original, perhaps consider renting it before parting with your cash.

A newcomer to Real-Time Strategy will find it an excellent introduction before moving on to more meaty fare, but Total War this is not.

A copy of this game was provided by developer/publisher for review purposes. Click here to know more about our Reviews Policy.
Tagged With: pc, Square Enix, Steam, Supreme Commander 2, xbox 360