Surgeon Simulator finally gets a follow-up that's bigger but not necessarily better.

The original Surgeon Simulator is an interesting thing to discuss. Despite its initially limited scope from the outset, it expands into some decent modes with varying objectives. The controls were difficult to get a grasp on but it played into the overall goofiness of the title to provide a fun experience.

Perhaps because Bossa Studios wanted to expand on that “limited scope” or simply wanted to evolve the experience further, Surgeon Simulator 2 is bigger, busier and now it’s own full-fledged universe with a story. While the developer can be commended for expanding a concept like this on such a scale, the execution in Surgeon Simulator 2 leaves much to be desired.

"There’s a fair bit of intrigue and while I could have stood for the game to slow burn things a bit more, it’s a welcome bit of mystery."

The core experience has been diversified into three major game modes – Story, Create and Discover. The Story mode sees you as a new trainee in a strange hospital, one that’s shoddily constructed but aims to help anyone become a surgeon. You’re guided by Dr. Pamela but it quickly becomes apparent that things aren’t what they seem.

And when I say “quickly”, I mean a literal voice in the vents that tells you things aren’t what they seem. It’s almost Portal-like in its set-up with the player being dropped into all these different chambers while a bigger, seemingly more nefarious scheme is being hatched in the background. There’s a fair bit of intrigue and while I could have stood for the game to slow burn things a bit more, it’s a welcome dash of mystery.

Bob returns and you’re tasked with conducting different operations on him, whether it’s severing an arm, removing a lung or popping off his entire head, all while ensuring he doesn’t bleed out. While you could simply rip off an organ or body part barehanded, it’s better to use a medical saw or scalpel to reduce the amount of blood lost. Depositing limbs and organs into special trays will send replacement parts to you. You’ll be managing your tools and Bob’s blood loss but eventually operations will descend into trying to access trays and replacement limbs from locked off areas.

Unfortunately, this design gets repetitive as things go along. On the one hand, I can appreciate how the setting plays into different objectives. It’s a hospital in disarray, that too with strange things going on, so it makes sense that certain doors would be locked or that you’d need to locate a medical scanner before commencing an operation. This also explains the sheer number of objects and trash strewn about, which makes locating tools a bit of a task. However, these objectives become extremely one-note over time. 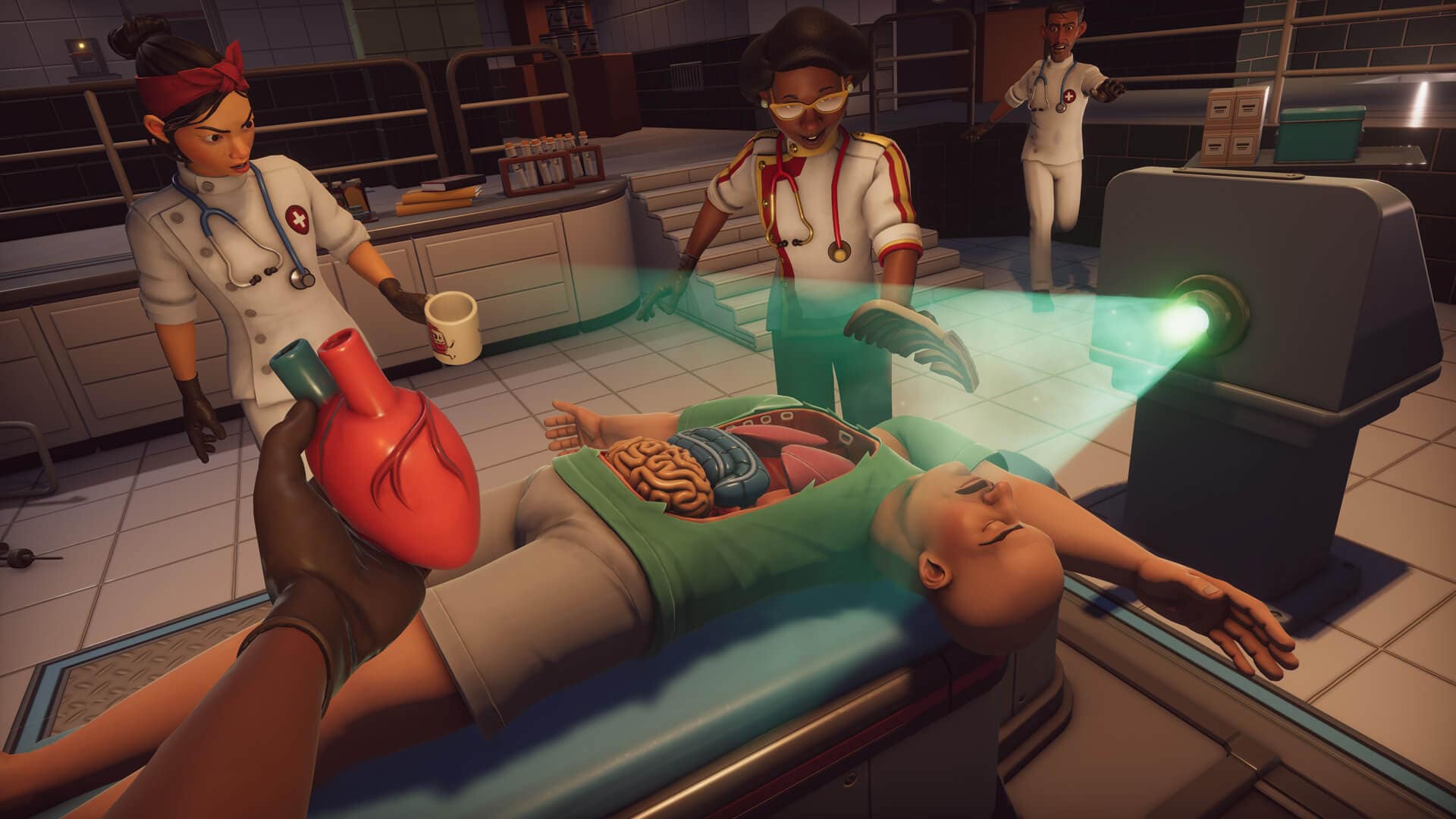 "It’s almost kind of waste though – for as aesthetically pleasing as the levels look, the core gameplay doesn’t really leverage them to full effect."

Things really start to go down hill when it comes to the controls. Much like the original, your hand is the main controlling entity – you can rotate it, raise it, lower it, grasp objects, extend and withdraw the arm, and so on. You don’t have individual control of fingers though – one’s grip is a relegated to a single left mouse click. This feeds into existing issues when it comes to grasping items. You’re managing the orientation of your hand while picking something up, which could be wrong because your arm isn’t extended enough. Or maybe you have just the right hand position and arm length but the object won’t be grasped without some trial and error. Expect to be annoyed by this fairly quickly.

Sometimes, you might lose track of which mouse direction is the correct orientation, which requires some fiddling to fix. It also doesn’t help that a lot of the first game’s nuance is seemingly absent. Operations still employ some manner of precision when it comes to chopping off limbs but have otherwise been extremely streamlined. There’s not much by way of gentle incisions – just pick up a scalpel, shove it into Bob’s chest and voila, you’ve got the heart or lung or whatever. The real challenge is ensuring the scalpel is just within the correct length of grasping and then oriented properly before extraction. It’s less interesting than it sounds and there isn’t much variety to the actual operations outside of replacing limbs and organs.

Unlike the previous game, you’re not just a hand operating on a patient. You’re a fully fledged person who walks around, jumping on things and picking up objects. For how imaginative the setting is, you’re not really doing much with the environment outside of picking up stuff, opening doors or pushing open grates.

I get that Bossa Studios isn’t trying to make the next Trauma Center but there must be better ways to spice up the gameplay, especially when the operations themselves are fairly typical. Littering the environment with random junk that gets in the way isn’t a good alternative either, though I do appreciate just the details in levels. It’s almost kind of waste though – for as aesthetically pleasing as things look, the core gameplay doesn’t really leverage them to full effect. 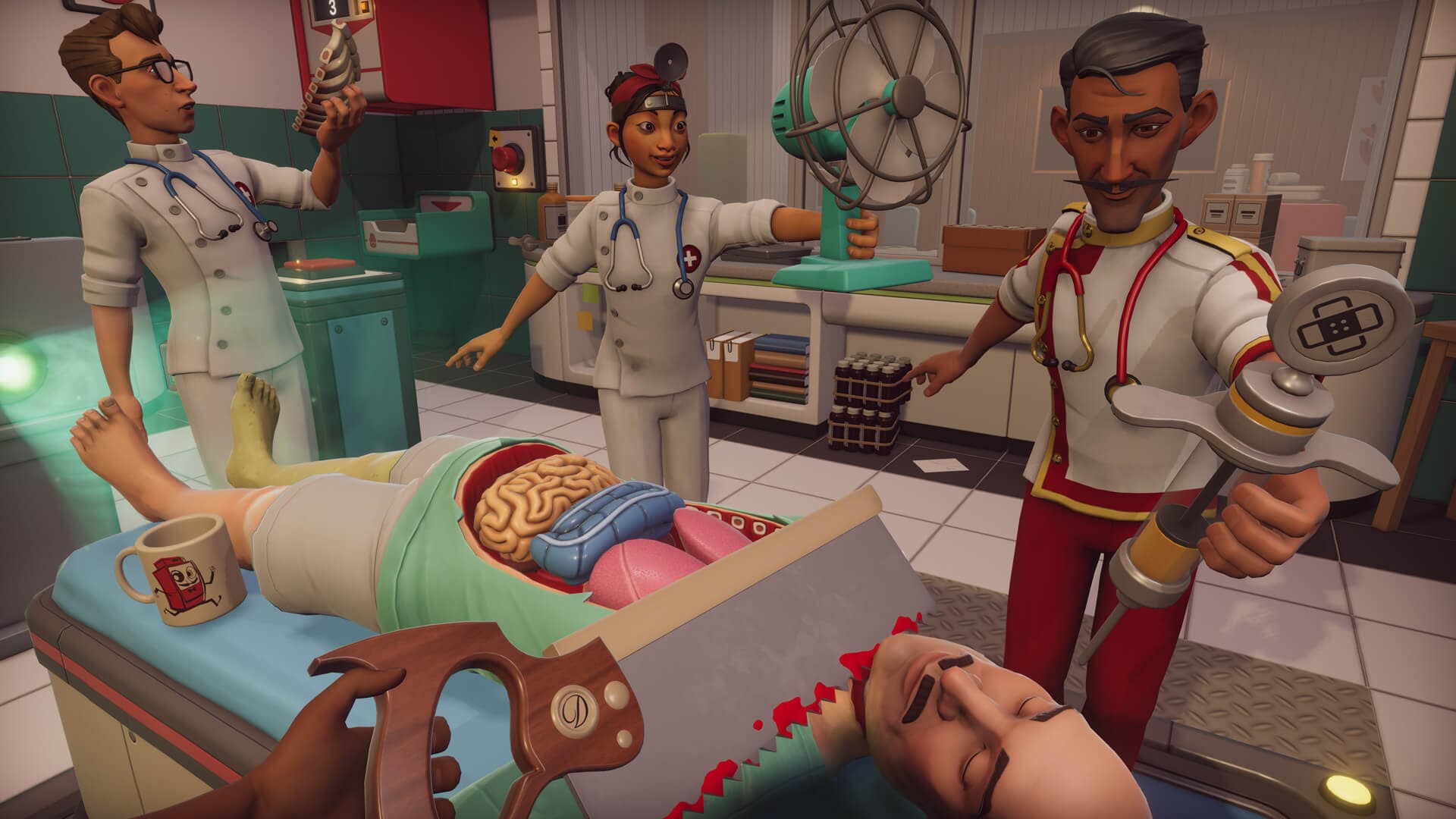 "If I had to sum up Surgeon Simulator 2 in one word, it would be “passable.”"

Perhaps this is just the single-player experience talking and Surgeon Simulator 2 is a lot better suited for co-op. Maybe four friends would have an uproarious time when it comes to managing an operation, though again, there’s not a whole lot to really manage. One would think that the Discover mode with its selection of user-created levels would have something interesting to offer and to be fair, some of the levels are interesting. There’s a custom playlist queue for selecting different levels and playing them, one after the other, and Quick Play for hopping into a quick match with other players.

Though it’s early days yet, there’s a decent amount of user-created content. Granted, these aren’t the most complex levels. One sees the player standing on a suitcase and using it to fly via some convoluted instructions. Another tried to recreate the original Surgeon Simulator and was painful to manage, to say the least. The Bossa Levels are fairly limited right now and encompass such gems as “flipping the bottle”, which is not very fun alone. Again, we’ll see how things fare down the line but in terms of showcasing what the creation suite is capable of – which seems to be a lot, as per pre-launch trailers – it’s a good start, if nothing else.

Of course, it’s worth addressing the XP system and daily challenges, which go towards leveling the battle pass-like system of cosmetic unlocks. Oddly enough, while it’s possible to unlock cosmetics in the Story Mode by completing different objectives (which are usually time or blood loss-related), XP is seemingly earned only from Quick Play matches, rating levels and completing objectives in multiplayer. All of the Daily Challenges are also tied to multiplayer. Still, for those who like fiddling with the customization – and there are quite a few cosmetic options available – you can expect a good amount of stuff to unlock. 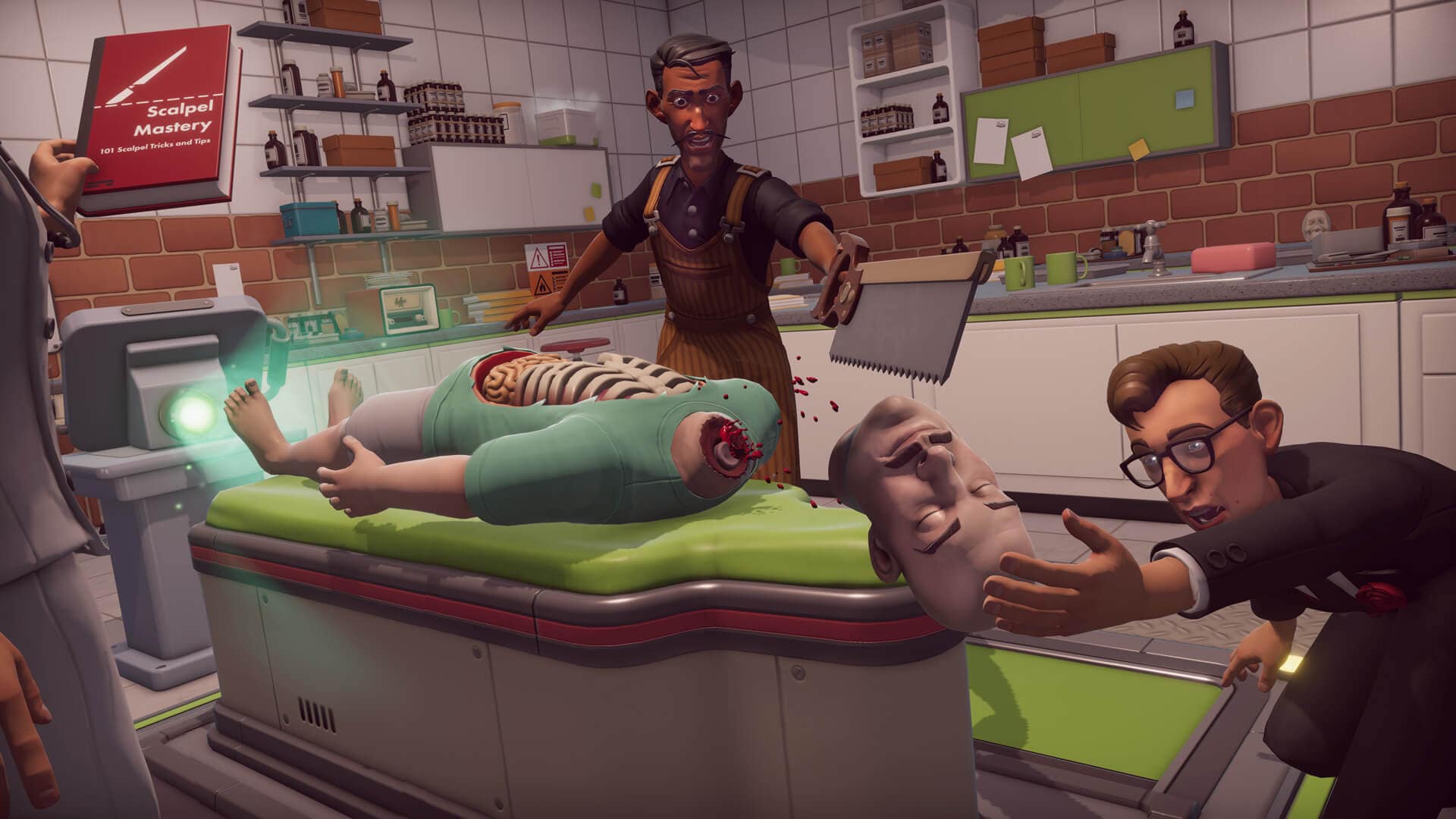 "Aesthetically, it looks nice though performance does slightly chug at times, and the voice acting is fairly well done."

If I had to sum up Surgeon Simulator 2 in one word, it would be “passable.” It’s hard to really recommended this to fans of the original, given how much has been simplified, but perhaps there are some players seeking a goofy, story-driven take on the formula. Aesthetically, it looks nice though performance does slightly chug at times, and the voice acting is fairly well done. Even the music is nice despite trying a little too hard to sound goofy at times. The controls are troublesome at best and downright irritating at worst but combining them with the samey objectives and repetitive nature of operations is what really drags the experience down.

While this is most definitely a “complete” package compared to its predecessor, the core gameplay loop really feels like it needed more time, more nuance and more interesting ways to leverage the interesting setting.

Decent aesthetic and attention to detail in levels. Interesting setting and story. Music and voice acting are well done. Creation tool-set has potential.

Controls are rough to master, and even then, grasping certain items can be a hit-or-miss affair. Repetitive operations with unimaginative "puzzles". Not much nuance when it comes to the actual surgery. For as imaginative as they appear, levels don't feel fully utilized.

Final Verdict:
FAIR
Surgeon Simulator 2 leverages its predecessor's unique gameplay into a full-fledged experience with a story and co-op. Despite some positives here and there, annoying controls, boring puzzles and tedious gameplay make for an overall trying time.
A copy of this game was provided by Developer/Publisher/Distributor/PR Agency for review purposes. Click here to know more about our Reviews Policy.