It has been confirmed by Famitsu (thanks a ton, 1UP) that Square Enix will be remaking the classic and the much beloved strategy SNES game Tactics Ogre on the PSP, and this time, it’ll be known as Tactics Ogre: Wheel of Fate (not Time, people, Fate). While retaining the core feeling anf look of the ’95 classic, it will be remade in 3D this time around, while allowing players to move the camera around to get a better look at the action.

Don’t expect much change in the gameplay though. The game will now allow 30 troops on screen, as opposed to 20 in the SNES version, and we will have new features and several new classes for the skill system, but otherwise, the core gameplay will remain largely unchanged. Obviously, we hope Square tweaks to meet the requirements of current generation gamers… or maybe an old school strategy game would be perfect… let’s wait and watch. According to designer Matsuno, the game will have new story angles, character developments (who knows, maybe even new characters) and new side stories. 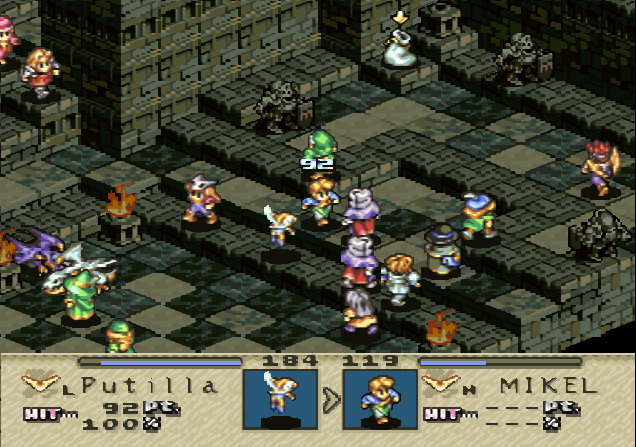 Director Hiroshi Minagawa, designer Yasumi Matsuno, character designers Akihiro Yoshida and Tsubasa Masao, and Hitoshi Sakimoto and Iwata Masaji of the music department will be joinging the team to remake the game they made fifteen years back.

No release date has yet been announced, and Square hasn’t confirmed if Wheel of Fate will be getting a western release. The original SNES version never got released outside of Japan, so we sure hope this one DOES get released. PLEASE, SQUARE, WE WANT SOMETHING GOOD TO PLAY ON OUR PSPs!!!