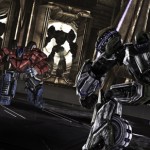 Transformers: War for Cybertron is one of the best game in the series. We at GB gave the game a 9. And it looks like the game will be getting further support from Activision and High Moon Studios. The... Read More