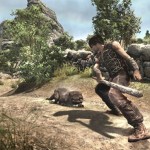 DreamCatcher Games, JoWooD Entertainment and Spellbound Entertainment have announced that and add-on for ArcaniA: Gothic 4 will be launched on March 25th 2011. Called Fall of Setarrif, it brings a... Read More