[HTML1] We finally can set our beady eyes on the first trailer for the new Mass Effect 2 DLC, Arrival. The expansion has been dubbed "the thrilling final mission" and will potentially set up Mas... Read More 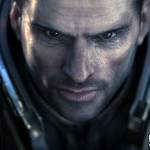 Recent rumours that Mass Effect 2's new DLC, "Arrival" will release on March 29th have been confirmed correct by EA. The DLC pack, which will be launching for all three systems, will see Shepard tra... Read More