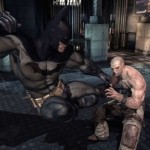 With Batman: Arkham Asylum hitting stores very soon, We at GamingBolt.com take a look at the Gadgets that Batman would need to bring down the huge Asylum of enemies. So here it is: 1. BATAR... Read More