Official Twitter says that this is only the first of several upcoming patches, and that other platforms would also receive some in the future.

Social media manager for the Sonic brand recently took to Twitter to reveal that an upcoming patch will alleviate all technical issues with the game.

Each Wisp offers a unique ability, whether it's filling the Boost Gauge or turning Sonic into a laser to shoot through enemies.

The new remaster sees a lot of improvements from the original, including a remixed soundtrack, improved resolution, and more.

Could the remastered collection live? 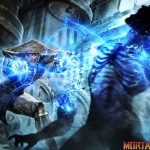 Mortal Kombat Trilogy Was Once Going to Get a New Remaster

Blind Squirrel Games was apparently doing the port, but it’s been nixed.

Minimum system requirement checks and save file issues have also been addressed.