Ghostlight have today announced that Fate/EXTRA, will be released on the 4th May, with the collector’s edition priced at £39.99 with a PSN release to follow. Ghostlight have also released de... Read More 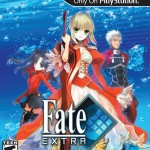 Ghostlight have today announced that they will be bringing RPG Fate/EXTRA to the PAL region on PSP later this year. Waking up in a strange virtual world with no recollection of the past, the ma... Read More

Aksys are beefing up Fate/EXTRA with some of the same sought-after items bundled with the Japanese version such as the special 15-page Fate Visual Works art book and the 11 song Limited Soundtrac... Read More