[HTML1] A new behind the scenes trailer for survival FPS Fear 3 shows u what goes into the recording of the game's sound effects. You get to see a lot of guns go boom, which is always a good thi... Read More

Achievements and Trophies Revealed for F.E.A.R. 3

Now that F.E.A.R. 3 is out, gamers are playing and have been increasing their Gamerscore and Trophy collection. In order to help players increase their scores, Warner Bros has released a complete ... Read More 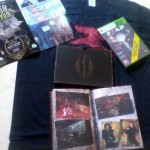 I was just chilling around in my living room when I got a parcel from the E-xpress games. Initially I thought this might be another game for review but the package was pretty big in size so I thought ... Read More

[HTML1] The new trailer for FEAR 3, accolades, has been released to promote the game's launch. It shows off some story, some gameplay and a guys exploding under the grip of psychic powers. What'... Read More

Warner Bros. have launched the third instalment of the FEAR franchise in the UK today for PS3,Xbox 360 and PC. According to the press release "In F.E.A.R. 3, players can take on the role of Poin... Read More

[drop-cap]C[/drop-cap]heck out these FEAR 3 Wallpapers in HD. fear-3-hdd-wallpaper-pc Read More

[HTML1] Check out this launch trailer for FEAR 3. The game releases on June 24th on the PlayStation 3, Xbox 360 and PC. Stay tuned for the full review right here on GamingBolt.com.Read More

[HTML1] Check out these latest trailer from F.E.A.R. 3. The game releases on the PlayStation 3, Xbox 360 and PC.Read More

FEAR 3 Spanish Version Being Released In The US?

In a listing by Gamestop, a Spanish SKU is scheduled to be released in the USA. As you can see its probably a different SKU altogether. Normally versions from different countries are not listed. ... Read More

Being a huge fan of the original FEAR, I decided to catch up with Jason Frederick, courtesy E-xpress games. Jason is the associate producer at Day 1 Studios and we chatted how FEAR 3 has evolved ever ... Read More

[HTML1] Check out the trailer for the 'F**king Run' multplayer mode in Fear 3, in which players must work together to battle enemies and progress whilst staying ahead of 'the wall of death' which i... Read More

If you were looking forward to upcoming horror FPS FEAR 3, you may have to wait a little longer. Having been due next month on May 27th, the Day 1 Studios title will now launch on June 24th. ... Read More

[HTML1] If you missed out on the first two FEAR games and want a quick catch up for number three, today is your lucky day. A new story trailer talks about the origins of the demented rivalry bet... Read More