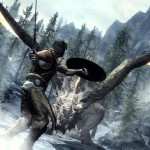 Bethesda recently released patch for the PS3 version of Skyrim to alleviate some of the issues gamers were facing, notably the low framerate that supposedly made the game playable. The patch, while ... Read More