Tony Todd, who is playing Venom in the upcoming Marvel's Spider-Man 2, says Insomniac's superhero sequel is going to be "massive." 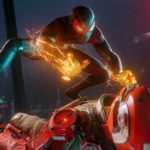 Marvel Games' Bill Rosemann says the plan is to "keep each game set in its own universe."

The Last of Us Part 2 ranks at fourth despite being released only last month.