It's as weird as you think.

Rip and tear, until it is done.

Fall Guys Has Sold Over 11 Million Copies On PC Alone

The Beans will engage in some Winter obstacle runs next month.

And it's sort of fantastic and all.

Overcome draw-bridges, swinging axes, and more in this episode opener.

The unique battle royale game made a huge splash.

The hammer will appear in levels at random to help or hinder you. 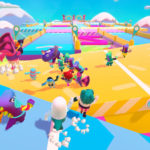 Mediatonic's bizarre multiplayer title is already moving on to season 2.