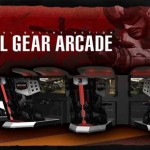 During a recent interview with Konami CEO Fumiaki Tanaka, he said that he has high hopes regarding the sales of Peace Walker, and he expects it to sell more than 3 million units worldwide.  And so fa... Read More