Miitopia debuts in second place, while Mass Effect: Legendary Edition falls down to No. 3. 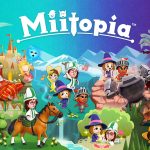 Splatoon 2 holds on to second place.