Sengoku Warriors 5 (releasing in the West as Samurai Warriors 5) sells 280,000 units in Asia. Both titles helped drive an increase in revenue.

Several issues related to mouse sensitivity, crashes, and so on have been addressed. 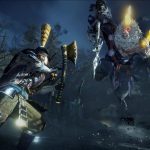 The publisher took to Steam to say they are working on fixes.

The Nioh Collection Announced for PS5, Includes Remasters of Nioh 1 and 2