Firesprite Studios, the team behind the likes of The Persistence, The Playroom, and more has been acquired by PlayStation Studios.

Tales of Arise represents Bandai Namco's series at its best in a long, long time.

While the upcoming first person shooter's reveal trailer made no mentions of Activision, the company's logo can be spotted once again in its recent multiplayer reveal. 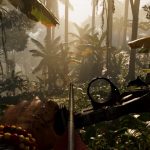 Ubisoft's upcoming open world first person shooter will have a download size of 38.945 GB on the PS5, with pre-loads set to begin two days before launch.

Those who purchase the game on PS4 or Xbox One will be able to upgrade to the PS5 or Xbox Series X/S versions for no additional cost.

10 Most Wanted Video Game Sequels of All Time

[drop-cap]T[/drop-cap]here are some good video games, and then there are some great video games that fans can't get enough of. Naturally enough, many games get sequels for that purpose, or sometimes f... Read More

No campaign more and pricing on current-gen consoles aside, there's plenty to worry about in DICE's biggest Battlefield yet.

Call of Duty: Warzone’s Next Map Set in the Pacific, New Anti-Cheat Incoming

Out later this, the new map offers various new points of interest and uses the same tech and engine as Call of Duty: Vanguard.

2K Games has released a new trailer that details what you should expect from The City in NBA 2K22 on PS5 and Xbox Series X/S.

Tactical Sprint, blind-fire from cover, different caliber bullets and much more are new for this year's multiplayer with 20 maps at launch.

Learn more about Bandai Namco's upcoming action RPG, from the setting and story to the new combat and exploration mechanics.