Resident Evil 4's VR version has a number of cut dialogue and edited scenes, mostly done in the favor of removing sexualization of Ashley's character. 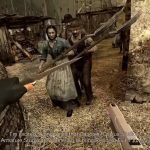