[HTML1] Deep Silver and Piranha Bytes today released the second episode of the six part making-of series that will become available over the course of the next months. This time, the developers fr... Read More 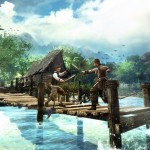 Risen 2: Dark Waters Gets A New Website and GamesCom Trailer

[HTML1] Ancient creatures are rising! It's up to you to make a stand against this evil. Prepare yourself and keep your sight fixed upon the restless water! Deep Silver presents the brand new GamesC... Read More

Deepsilver have released the first trailer for Risen 2. Check it out below: [HTML1] Story Overview: Several years after the end of Risen, humanity is pushed to the brink of existence and one o... Read More