Salt and Sacrifice Review – Been There, Done That

Salt and Sacrifice mixes in a lot of standard RPG ideas with its interesting art style to deliver a worthy, if overly familiar experience to fans of challenging 2D action games.

Salt and Sacrifice Launches May 10

Co-developer Devoured Studios has also released new details on how PvP will function in the action RPG, and what improvements it makes over Salt and Sanctuary. 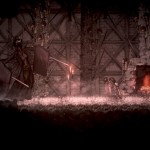 Salt and Sanctuary Launches on Nintendo Switch on August 2

Prepare to die, in this gorgeous 2D take on the Dark Souls formula.

Dark Souls-style side scroller also bound for Asia and Japan.

[HTML1] Here is the latest Dev Diary for The Dishwasher: Vampire Smile is you want to call if that.  It is more of the staff running around with cameras and giving a tour of the studios.  The game ... Read More