Archive For the darkness 2 Tag

[HTML1] Here is an interview with the Creative Director on Darkness 2 at E3 2011.  As you can see it is very dark indeed, but after getting a look at the sequel, I was very impressed by the style of... Read More 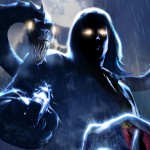 [HTML1] Here is the latest video for The Darkness II, being the E3 2011 trailer.  The trailer has got some sweet gameplay action and what other game can you quad wield weapons.  I enjoyed the first... Read More

[HTML1] You will return in The Darkness 2 playing Jackie Estacado from the first game.  The game will be out for the Xbox 360, Playstation as well as the PC on October 4th in North America and Octob... Read More

[HTML1] 2K has released a developer diary for The Darkness II. The video features Digital Extremes’ Sheldon Carter discussing what’s in the game, its storyline, and how the team went about d... Read More

First detail of The Darkness 2

Having been announced last week, the first concrete details are coming in on upcoming FPS, The Darkness 2. The game will carry on the originals focus on an “emotional” story and will attempt t... Read More

The wait of over 3 years has finally ended with 2K Games finally announcing the sequel to one of the most original shooters this generation. The official press release is below: 2K Games announ... Read More

Superannuation has outed that Digital Extremes will be working on The Darkness 2- the CV of Emmanuel Pappas mentioned the developers. Digital Extremes have a good track record till now- they worke... Read More