Let me tell you a secret - I was actually dreading the thought of playing this game, Smash 'n' Survive. There's a reason for that. It's made by an Indian developer. Now, people who don't know what t... Read More 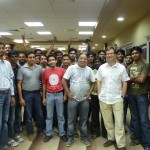 Smash 'n' Survive is a car combat game developed by an Indian Studio, Version 2 Games. The game will be released exclusively on PSN, and has been development for quite a while. We never really had mu... Read More