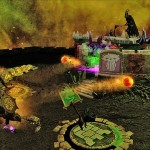 Wage war and torment the denizens of destruction. Or just be noble. Whatever works.

[HTML1] Atari has released a second "How-To-Play" video for their game, Warlords. The video shows some gameplay footage, and well, it tells you how to play the game. Stay tuned for more info.Read More

Warlords – How to play trailer

[HTML1] Atari’s have released a video for Warlords  that will give you an overview on how to play. Warlords comes out on the PlayStation 3, Xbox 360 and DS.Read More

[HTML1] A new trailer for Atari's upcoming Warlords remake shows off some of the characters in the game. The thing looks absolutely bonkers, just the way we like it.Read More