Wage war and torment the denizens of destruction. Or just be noble. Whatever works. 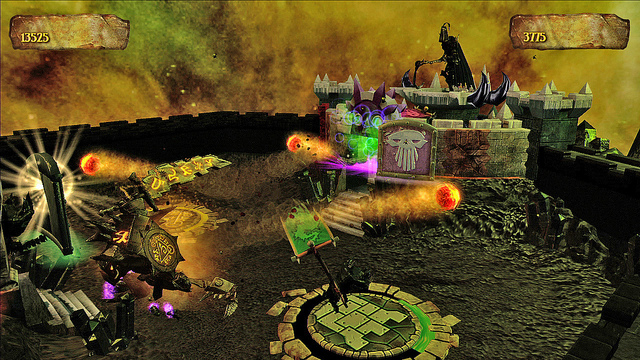 Atari has announced the launch of Warlords, a remake of the classic Atari 2600 title, for PSN at $9.99/€9.99. It boasts all the action of the classic with a new modern look and online modes. XBox Live gamers can also look out for it on November 14th for 800 Microsoft Points.

As the PR states, “Warlords is a one-to-four player arcade action game in which players will defend their castles from a maniacal dragon, unleashing a torrent of fireballs and crafty minions against their strongholds. In this whimsical reinvention of the beloved classic, players will face the ultimate battle of speed, strategy and survival. In addition, the game will increasingly challenge players to multitask as they strive to shield the castle walls and simultaneously rally troops to capture control points, collect power-ups and destroy the other warring factions – either alone or alongside three other players.”

Some key features include protecting your stronghold, cooperative and competitive battles for up to 4 players. including co-op siege mode and classic free-for-all, plus highly customizable units.