Tank Battles isn’t a completely new IP, it’s actually more of a revamp of the older version of the classic tanks that shoot each other (top down view, i don’t mean the 2D ones that you choose angle, etc), but what it offers is completely beyond all those older versions.

First off, you can choose skins for your Tank, you unlock more along the way but it’s still something pretty nice, the more noticeable stuff are perhaps the massive amount of maps you can choose, there are about 50 maps and they range from standard maps to ice maps where its a bit slippery, and the more crazy ones which you will have to blow up blocks in order to reach your opponent similar to Bomberman, and some maps have portals that just make everything even crazier. 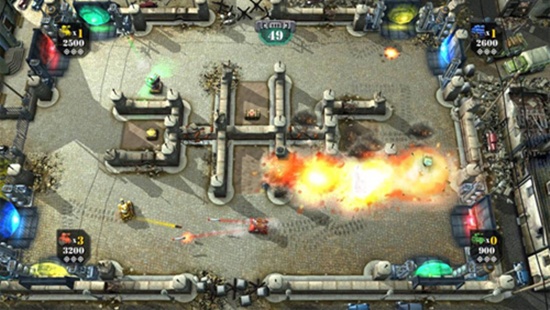 One of the examples of how crazy games can be

The other cool new features are the weapons and upgrades, when you are in a battle you can of course shoot normal shells but you can also plant mines. there are a handful of upgrades that you can get such as faster speed, faster rate of fire, shield, invisibility, you can also get weapons such as a rocket launcher, flamethrower, and more.

All in all, all these cool twists are awesome, but one thing that is really annoying is that there is only 3 game types, which is Deathmatch, Team Deathmatch, and capture the flag, even though 3 seems like a nice number, i just feel like this game can do more than 3 game types,  i can’t tell you which, but that’s just how i feel.

Moving on to the game modes – You can play the normal solo campaign on your own which is just you against everyone pretty much, but you can also go through the campaign with a friend which is a very nice addition.  The other game mode is Battle which is the one you should choose if you want to play a local game with 1 or 3 other players, of course if you only have 2 controllers you can make the other tanks bots so it’ll make things a bit more even. 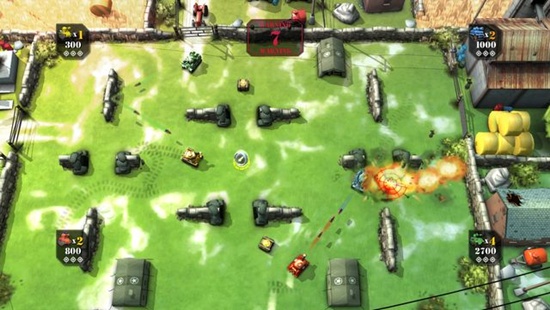 The last type of game mode is Online Battle, which is just like Battle except its against random online people, you can accept invitations from other friends as well, but overall i felt like the online was just something i wouldn’t play for more than 10 minutes.

All in all, I think Tank Battles was a great purchase for me, especially after the amazing deal that was on PSN this week, the game only cost me about 4 bucks instead of the release price of 15 dollars.

If you still can’t decide weather this is the right party game for you, there is a demo you can try out and see what you think, if the deal is still on the Playstation Store, i highly recommend you download this game, you and your friends will have a blast.

Great fun with friends, Long campaign (it can be played both Solo and Co-Op), Tons of maps with different strategy elements, Decent graphics.

Online isn't something that will keep you playing this, Only 3 game types, No tank customization (except for skin)

Final Verdict:
SUPERB
If you are looking for a good party game from the Playstation Store, Tank Battles is the one to get.
A copy of this game was provided by Developer/Publisher/Distributor/PR Agency for review purposes. Click here to know more about our Reviews Policy.