A world of paper at your finger tips.

Tearaway is a unique 3D platformer developed by Media Molecule, the folks who bought us LittleBigPlanet on the PlayStation 3. When it comes to creating amazing worlds for gamers to play and have fun in, Media Molecule always seems to hit the mark perfectly. Fortunately for all you platformer lovers, Tearaway is another gorgeous work of art from the UK based studio.

In Tearaway you get to play either as Iota or Atoi, two very unique personalities. Iota and Aoti are actually envelopes and depending on what the player chooses to play as, one of them falls into the Paper Dimension. For the sake of keeping it simple we are going to refer Iota as our reference in the review. After falling, Iota is surrounded by bits of paper which magically create his arms and legs, and this where our little adventure begins. Iota has an urgent message to deliver to you, the player which is represented by a face in the Sun. Iota’s message is different for every person and will change depending on what you do and create in the game. 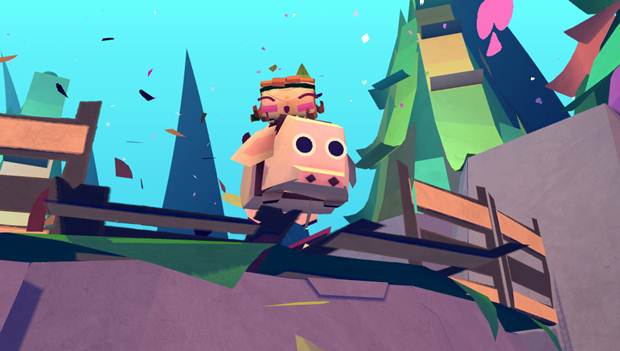 "Tearaway makes use of the PlayStation Vita's features in great ways and at no point did I felt like the controls were tacky or forced like the underwhelming Uncharted Golden Abyss's rope climbing mechanic."

It wouldn’t be a Media Molecule game if you couldn’t customize Iota in whatever crazy way you want. As you play through the story you will collect confetti that you can use to buy different things like camera lens, filters and decorations which you can use to personalize Iota to your liking. Decorations range from different eyes, noses and mouths to random things like hearts and faces. These decorations can be made bigger or smaller in size and can be put anywhere on Iota as well as on other inhabitants of the Paper Dimension. This gives Tearaway a LittleBigPlanet feel which fans of the series will definitely appreciate.

Tearaway makes use of the PlayStation Vita’s features in great ways and at no point did I felt like the controls were tacky or forced like the underwhelming Uncharted Golden Abyss’s rope climbing mechanic. In the past not many games have managed to use the rear touch-pad in a way that worked well. Fortunately, Media Molecule have made good use of it without all the annoying hassle of having to be very precise or accidentally hitting it at an inopportune time.

As Iota travels through the Paper Dimension he will come across blocked paths and will look to you, the face in the Sun for help. There are areas where you can poke your finger into the Paper Dimension from the rear touch-pad to interact with objects in Iota’s world allowing you to do things like clearing paths, destroying scraps [the enemies in the game] and raising him off the ground to reach higher areas. It all works very intuitively and looks graceful and smooth. 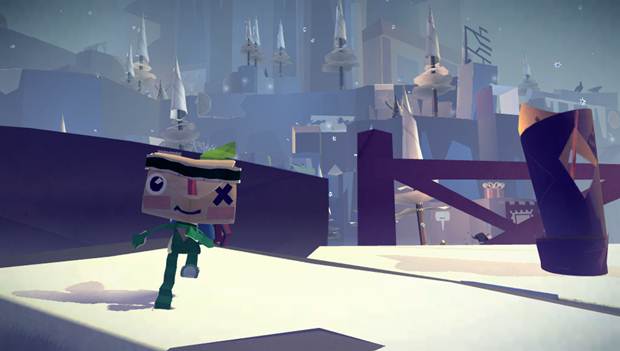 "At the end of the day some more complicated puzzles would have been welcomed to make you stop and think for a second."

However there is one small issue that I think needs pointing out. When you get to these areas where you need to use the rear touch-pad, that part of the screen turns grey and has PlayStation’s signature button symbols floating around inside of it to show where you can interact. These areas feel like they don’t have any life or texture in it. Its not that big of a deal especially considering how great everything else in Tearaway looks but it makes these areas of the game look unfinished.

Other parts of the game use face buttons and tilt features to open paths that are blocked for Iota making the platforming in Tearaway diverse. It’s never very challenging to figure out what it is you have to do, making the game fairly easy to run through in a short amount of time. However if you are of the explorer type than you can extend your play-through by finding all the hidden collectibles around the world. At the end of the day some more complicated puzzles would have been welcomed to make you stop and think for a second.

Let us talk about the enemies in the game who are merely called Scraps. Scraps come in a few varieties and require different tactics to defeat. Your normal Scraps will jump on you and if by any chance they missed hitting you, the player can pick them up and throw them on the wall. Other Scraps have a bounce pad attached to their backs which Iota has to jump onto to flip them over. However the player needs to tap the Scrap on the touch screen to crush them while they are flipped over. Overall I found the combat to be overly simple and weak in some cases. 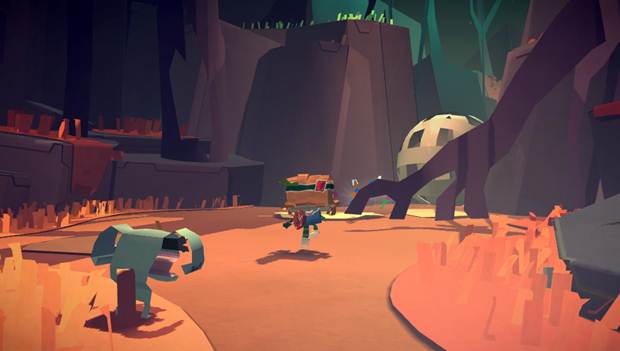 "Everything in the Paper Dimension is as its name suggests, is made out of paper with objects folded in origami style to create an engrossing world."

During Iota’s journey you will meet all kinds of people who need help. The Scraps seem to enjoy stealing things from people including their color, property and facial features. When Iota meets these people you can draw your own things. For example I ran into someone who had their crown stolen and asked if I could make him another one. The gameplay screen then changed into a table with different colored papers which you can use to make a crown by drawing it on the touch screen. This is something I found to be pretty inventive and thoughtful and I am sure many players will be intrigued by this interesting gameplay mechanic. Given how cute this feature is, it might actually put a smile on your face.

Tearaway is a beautiful game to look at. Everything in the Paper Dimension is as its name suggests, is made out of paper with objects folded in origami style to create an engrossing world. The grass, trees and all the way up to the sun and clouds have that origami feel to it. Paper has never been as appealing as it is here and Tearaway’s use of paper to create its world opens up all types of cool gameplay mechanics.

As Iota travels through the Paper Dimension he’ll find curled up paper bridges and will need you to open them by swiping across the front touch screen to create a bridge for him to pass over. Another cool feature of having a game set in a paper world is that Iota will sometimes come across areas covered in glue that will allow him to walk along walls to reach higher places and hidden locations. 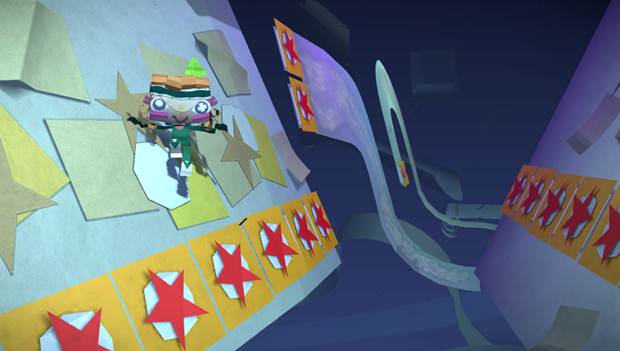 "Tearaway's few flaws do drag it down a little but Iota's journey through Paper Dimension is still fun to give Tearaway great replay value."

Iota also has a camera of his own that will let him restore color that the Scraps have stolen from different people. When Iota finds something that is completely blank he can take a picture of it giving back its color. Restoring color to something also unlocks a printable version that you can get at Tearaway.me. There are over 50 different things that can be printed once they’ve been unlocked.

Tearaway’s audio always manages to keep pace with what is happening in the game. The soundtrack is fun, upbeat and there is even a section that has turntables that lets the player mix the music as Iota walks across them. The inhabitants don’t actually speak but their emotions are represented by speech bubbles while making muffled yet adorable sounds.

Overall Tearaway is a good addition to the catalog of exclusive IPs that the PlayStation Vita has. Tearaway’s few flaws do drag it down a little but Iota’s journey through Paper Dimension is still fun to give Tearaway great replay value. Tearaway’s use of the Vita’s different features works perfectly and makes it one of the better handheld games that any fan of LittleBigPlanet or platformers in general should enjoy.

Combat is weak, puzzles could have been more challenging, too short.

A short but an extremely enjoyably ride, Tearaway is one of the best experiences available on the PlayStation Vita.

A copy of this game was provided by developer/publisher for review purposes. Click here to know more about our Reviews Policy.
Tagged With: Media Molecule, ps3, PSN, tearaway