Back in the late 80s and early 90s when beat ’em ups were wildly popular, Teenage Mutant Ninja Turtles games were some of the best representatives of the genre, capitalizing on the success of its source material and the genre to deliver multiple experiences that consistently captured lightning in a bottle. Decades later, beat ’em ups have made an unlikely comeback and seem to be thriving again, so it makes sense that the Turtles are coming back into the limelight as well. Developer Tribute Games’ TMNT: Shredder’s Revenge is a wonderful follow-up to the arcade Turtles beat ’em ups and the SNES’ Turtles in Time, and much like Streets of Rage 4 before it, it toes the line between paying tribute to a bygone era and deliver a solid new modernized take on it with great aplomb.

One thing that’s abundantly clear from the very first moment you boot up the game is Tribute Games’ love for the source material and for the aforementioned classic TMNT games. In more ways than one, Shredder’s Revenge is a wonderful love letter to those spiritual predecessors and to the legendary cartoon itself. From beloved characters being perfectly portrayed to deep cut easter eggs, from the original voice actors from the cartoon reprising their roles to the excellent soundtrack and the way it perfectly captures that 90s vibe, from the wonderfully animated cutscenes sprinkled throughout the game and how they’re just brimming with nostalgia to so much more, Shredder’s Revenge is a game that takes every chance it gets to show its love for the beat ’em ups that have inspired it, and, of course, for Teenage Mutant Ninja Turtles itself.

"Developer Tribute Games’ TMNT: Shredder’s Revenge is a wonderful follow-up to the arcade Turtles beat ’em ups and the SNES’ Turtles in Time, and much like Streets of Rage 4 before it, it toes the line between paying tribute to a bygone era and deliver a solid new modernized take on it with great aplomb."

But this isn’t a game that’s just riding on the nostalgia wave. Rather than simply looking to score some quick and easy points on that front, Shredder’s Revenge wastes no time in proving to players that it’s also an accomplished beat ’em up in its own right, one that isn’t just content with aping those classic late 80s and early 90s games, but also makes several key improvements of its own to deliver a more polished, refined, and in turn, enjoyable experience.

Right off the bat, there are six playable characters- the Turtles themselves, Splinter, and April O’Neil, with Casey Jones coming in later on as an unlockable character. The general way to play is the same with each character, which means that that accessibility and easy-to-pick-up nature that is so important in beat ’em ups is retained here. At the same time, however, there are meaningful ways each character differs from all the others. They all have completely different animations and fight using their own unique weapons, of course, but they have notable mechanical differences as well, with each having variations in things such as their speed, the reach of their weapons and attacks, and how much damage they do, while they all also have their own unique special attacks. Playing as each is fun, and even though everyone will naturally gravitate towards their personal favourites, I can confidently say that they’re all great to play as.

It helps, of course, that the core combat in Shredder’s Revenge is great, striking the perfect balance between button mashy fun and mechanical depth. Regardless of whether you’re looking for something mindlessly enjoyable or something with a skill ceiling, the game delivers. Main attacks are dealt with a single button, with the primary focus being on repeatedly mashing it to deliver chained combos. In addition to that, however, you have various other moves- an uppercut to send foes flying upward, a downward kick for when you’re airborne, a charged attack to break enemies’ defences or deal harder-hitting strikes, a dodge that can be combined with attacks or used to quickly recover from getting hit. 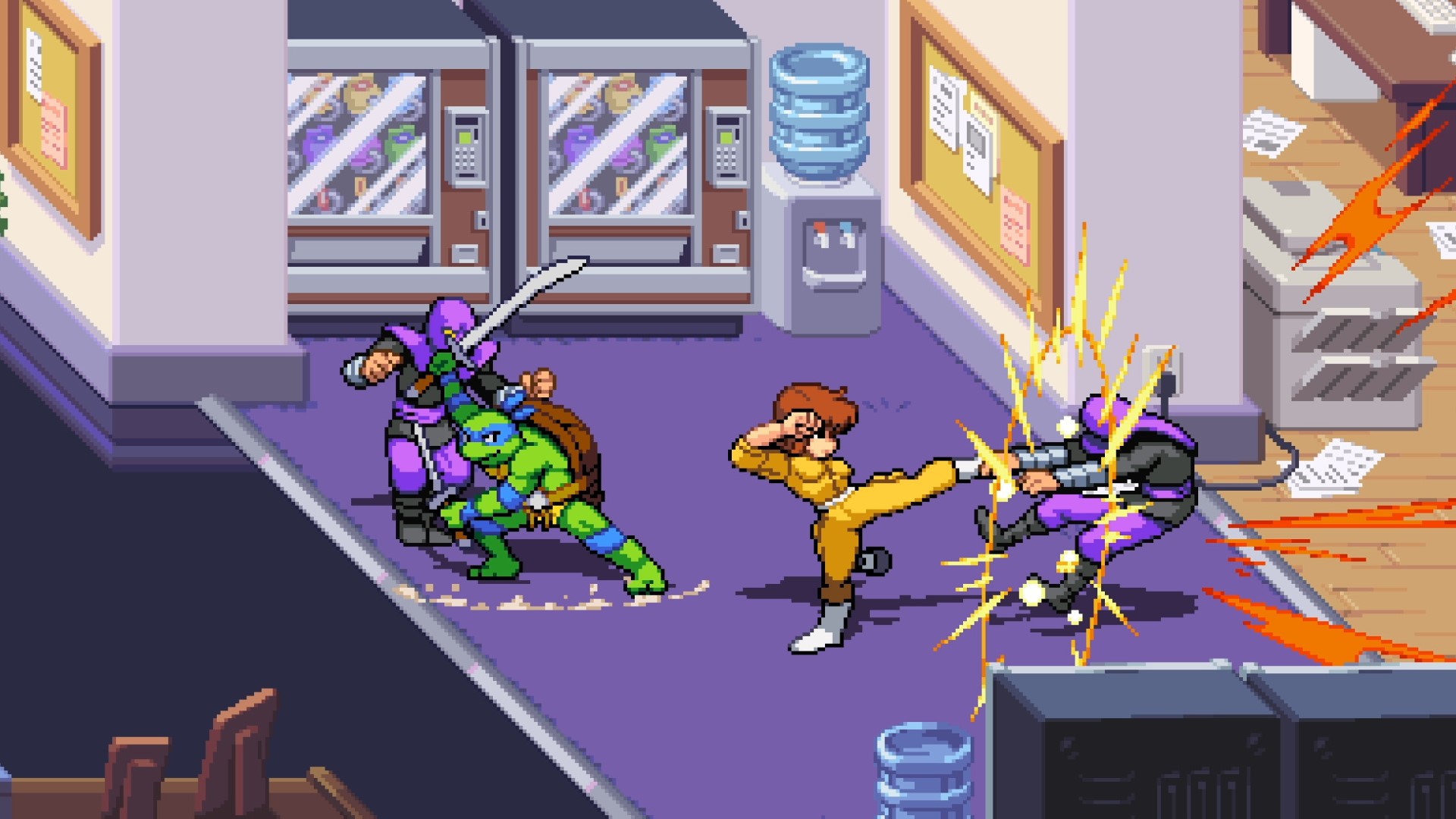 "All of these attacks and moves come together wonderfully, because when you get into that rhythm of chaining different moves together and dishing out combos and long chains of attacks without getting hit, it’s always incredibly fun and satisfying."

The most crunching of them all is the super attack. Build up your super bar to the max by dishing out attacks, and once it’s been charged up, you can unleash a super attack that essentially instantly clears most enemies in your immediate vicinity. The super bar fills up pretty quickly too, so you’ll be using these attacks with some regularity. All of these attacks and moves come together wonderfully, because when you get into that rhythm of chaining different moves together and dishing out combos and long chains of attacks without getting hit, it’s always incredibly fun and satisfying. Enemy variety helps with that as well- the further you progress into the game, the more it introduces new enemy types with different attacks and movement patters, calling for different strategies in dealing with them. If there’s one area where I feel the combat fails, it’s when you have to deal with aerial foes- though thankfully the bulk of the focus in the game is on grounded combat.

Shredder’s Revenge’s levels also deserve special praise. There are sixteen levels in the game in total, with the bulk of them taking place throughout New York City, and while there are some annoying hoverboard levels that I thought were a little sloppy in execution, the overwhelming majority of them are a blast. From a TV station to sewers filled with rats, from a museum to a zoo, from the rooftops of New York to so much more, there’s a solid variety of levels throughout the 2-3 hours it takes to roll credits. And it’s not just visual variety- levels often have uniquely themed environmental traps and hazards as well, which can be both a boon and a bane to you depending on how you play, from charging rhinos in the museum to monkeys throwing bananas at you from their cages in the zoo to wide open manholes on the streets of the city. The cherry on top of the sundae, meanwhile, is the interactivity of the levels. In classic beat ’em up fashion, there are things to smash and break and secrets to discover, and it really encourages you to pay attention to each new environment you find yourself in.

TMNT: Shredder’s Revenge also offers you two choices in how you choose to tackle those levels. There’s the Arcade mode, which is a classic arcade beat ’em up experience- limited lives and continues, no checkpoints, and no saving, taking you through the game’s sixteen levels one after the other in quick succession. Then there’s the Story mode, which frames all the levels within a world map, allows you to replay levels, and adds on other bells and whistles on top. There’s merit to both modes, and Arcade is definitely more preferable for those who’re looking for a classic beat ’em up experience, but I personally enjoyed my time with the Story mode more. Here, there’s a simple progression system in place for each individual character, as well as optional objectives in each level, like specific challenges or collectibles to find. If you’re looking for a meatier experience, Story mode is the way to go- though I will say I was a little disappointed with how barebones and, in turn, unnecessary the world map felt. 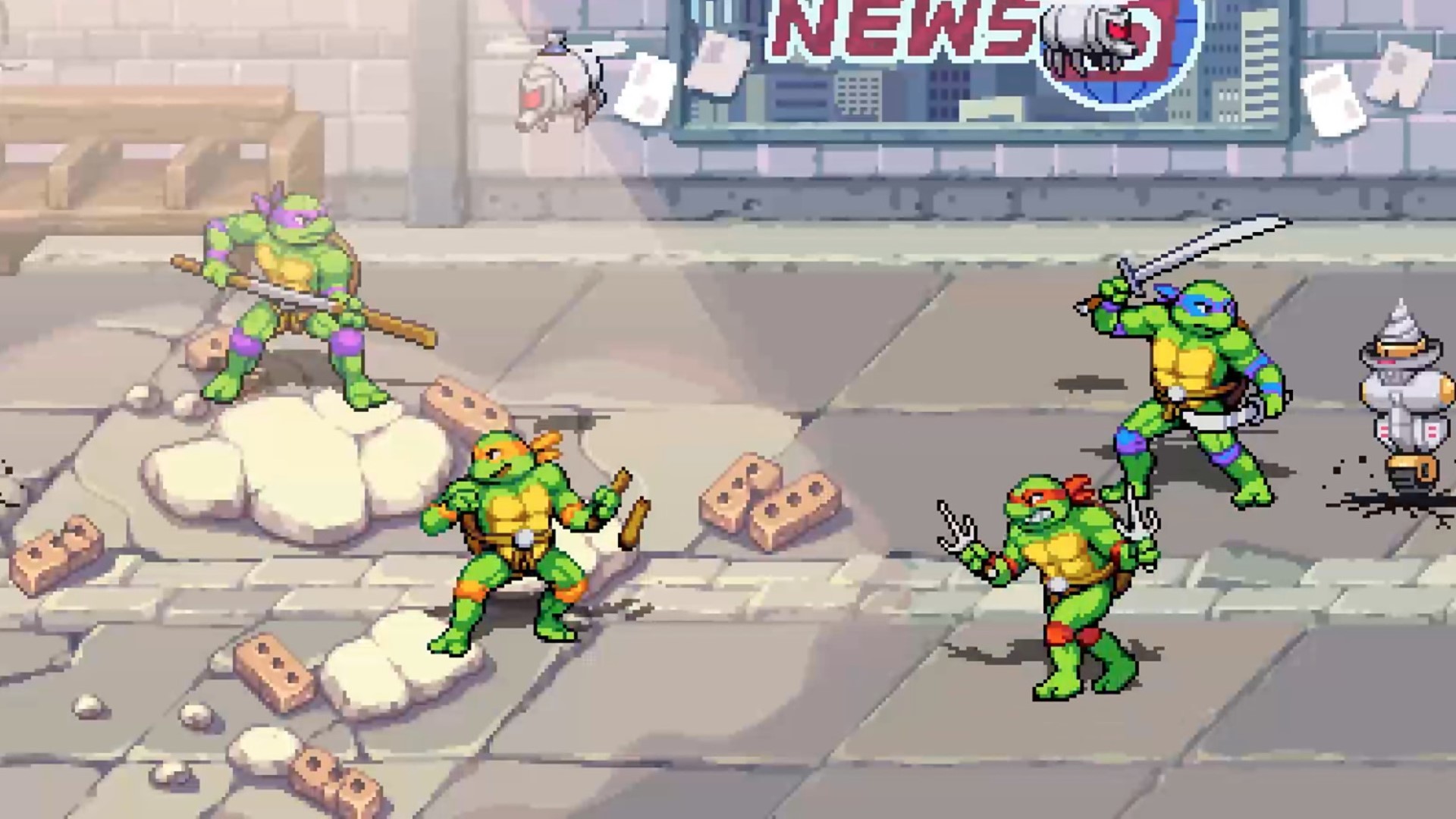 "This is a lovingly crafted and very well put together game that is not only an excellent and nostalgic callback a bygone era, but also a great experience in its own right that modernizes very smartly in all the ways that it should."

Ultimately, however, Shredder’s Revenge is a solid game, to say the very least. Whether you’re new to TMNT or to brawlers or experienced with one or both, whether you’re looking to play it solo or with five other players, whether you want to run through Arcade mode or tackle Story mode, there’s plenty to love here. This is a lovingly crafted and very well put together game that is not only an excellent and nostalgic callback a bygone era, but also a great experience in its own right that modernizes very smartly in all the ways that it should.

Brimming with love for TMNT and classic TMNT beat 'em ups; Looks excellent; Bopping soundtrack; Each character is fun to play as and feels different; Combat is accessible yet still has depth; Well-designed, varied levels.

Final Verdict:
AMAZING
TMNT: Shredder's Revenge is simultaneously an excellent throwback to the classic Turtles beat 'em ups and a solid new modern brawler in its own right.
A copy of this game was purchased by author for review purposes. Click here to know more about our Reviews Policy.