Tennis World Tour 2 has some good aspects, but they never fully combine into a satisfying whole.

Tennis is a deceptively difficult game. It’s all about positioning, timing, and reflexes. Small, snap decisions can make or break your performance. Game development is no different. Unfortunately, Tennis World Tour 2 hasn’t quite learned the lessons of the game it seeks to emulate. The game’s overall approach is solid, but several small issues build up, and result in a game less than the sum of its parts. The on the court gameplay is solid enough, but there’s not a whole lot to it.

You have four different serve and swing types, each mapped to the face buttons. This is straightforward enough, but elsewhere there are some odd control choices. Movement and shot placement are both mapped to the same stick. This makes it remarkably difficult to move in one direction and try to hit the ball in the opposite direction. You get used to it eventually, but it never really stops being annoying. There’s other issues on the court that hold the game back. While it is a marked improved visually compared to it’s predecessor, it still doesn’t look particularly good.

"Tennis World Tour 2 hasn’t quite learned the lessons of the game it seeks to emulate. The game’s overall approach is solid, but several small issues build up, and result in a game less than the sum of its parts."

Character models are odd looking, with facial animations being particularly bad. The models also have a strange sheen to them sometimes, which makes them look less like people and more like plastic models. The animations fare similarly. Some are decent, but a few of the animations look downright goofy. Characters look almost comical as they dash and sometimes skip across the court. Admittedly, it is an improvement over the previous game, where animation issues actually affected gameplay. That isn’t the case here, but they definitely affect immersion. A big draw of sports games is losing yourself in the illusion of playing the sport. That’s a lot harder to do when the people in the game look so awkward.

Still, the biggest issue with Tennis World Tour 2 is its brevity of content. There’s just not a lot to do here. And what is here is fairly straightforward. There’s a career mode, where you take a custom player through a professional tennis career, and there’s an exhibition mode. This is just a straightforward custom match option, where you set up a doubles or singles game with players of your choosing. But there’s none of the other modes that are often the selling point for sports titles like this. The game feels severely lacking in terms of content.

This wouldn’t be as big of a problem if what the game does have was excellent, but it’s not. It’s not bad, not really. It’s just simplistic, and offers nothing that hasn’t been done better elsewhere. The career mode is fun enough, but it doesn’t really do much. You go from tournament to tournament, with the final goal of reaching the world championship. And that’s pretty much all there is to it. You can choose to skip an event to undergo training instead, but this is a passive experience. Unlike other sports games I’ve reviewed, like UFC 4, where your training actually requires you to, well, train, here you just get a pop-up telling you that certain skills have improved. 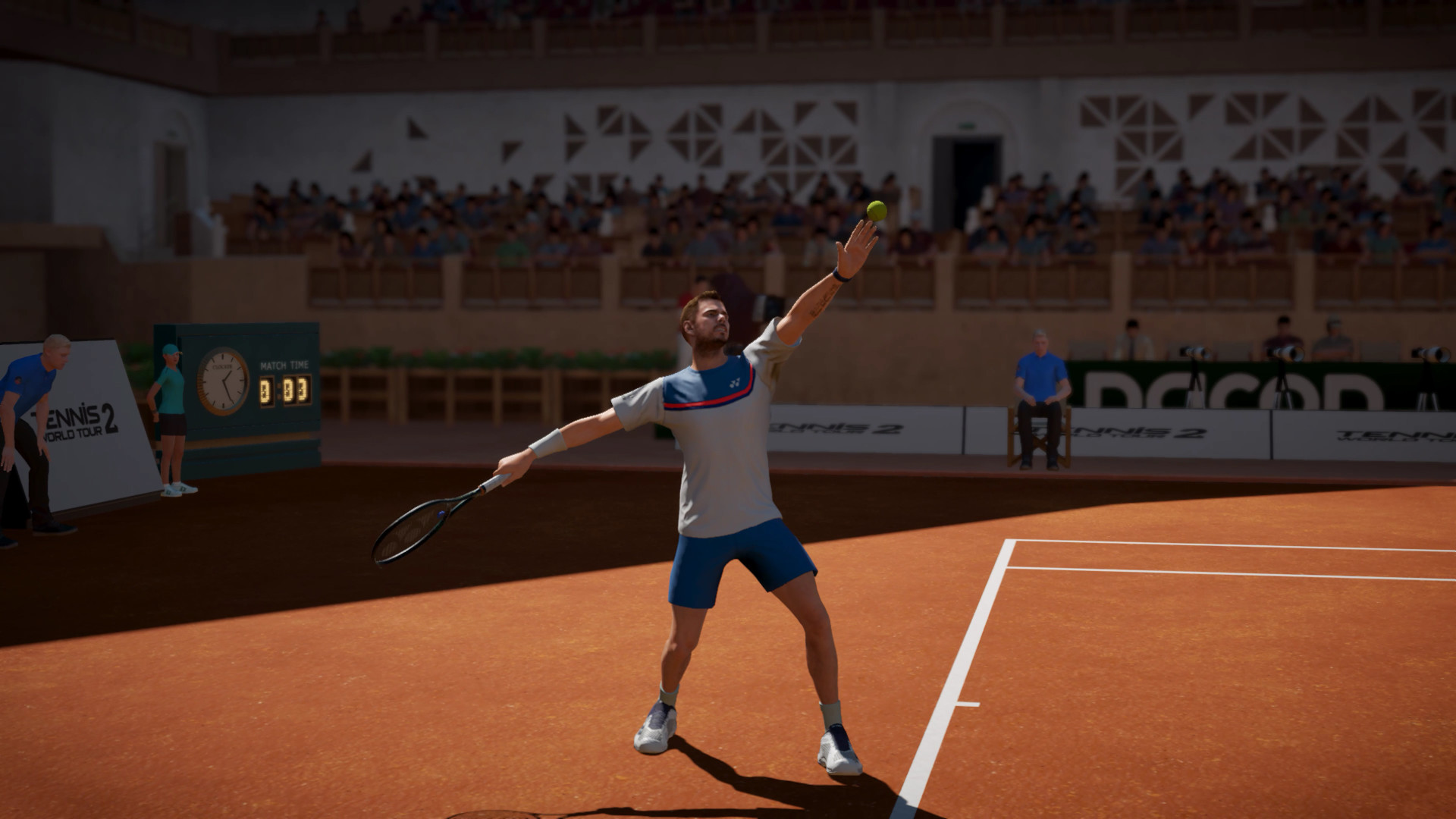 "The biggest issue with Tennis World Tour 2 is its brevity of content."

Aside from that, you can earn skill cards that can be used to provide yourself with boosts during a match, or to give hindrances to your opponents. But the problem is how you acquire them. You don’t purchase these cards directly. Instead, you buy packs of them that reward you with a random selection of cards. It makes you feel like you have remarkably little agency in actually determining your character’s playstyle. You don’t work towards anything. Instead, you just work towards abstract goals, like getting enough money to pay for a chance to get that skill boosting card that you want. This is the biggest problem with career mode.

Outside of the matches themselves, you just don’t actually do all that much. You don’t make rivals or friendships, you don’t train. You just watch a number go up that gives you a random chance of a card that makes other numbers go up. I never really felt like I was making progress. The game was progressing, sure, but I never really felt like a part of it. The tragic part is that the actual core gameplay of Tennis World Tour 2 is pretty decent. It doesn’t look great, and the controls can be wonky at first. But once you get the hang of it, play feels decently fluid. Doubles matches in particular can actually be a lot of fun.

And there’s a pretty wide selection of players, courts, and gear that you can experiment with. Different weather conditions can affect your performance in different ways. Honestly, exhibition mode is the most fun part of the game. It’s the only part of the game where you can really experiment, trying out different courts and gear and weather at your whim to see how things change. But even on the court, the fun doesn’t last too long. Different players don’t feel all that different from each other during play, and the cards didn’t really feel like they made all that much of a difference. 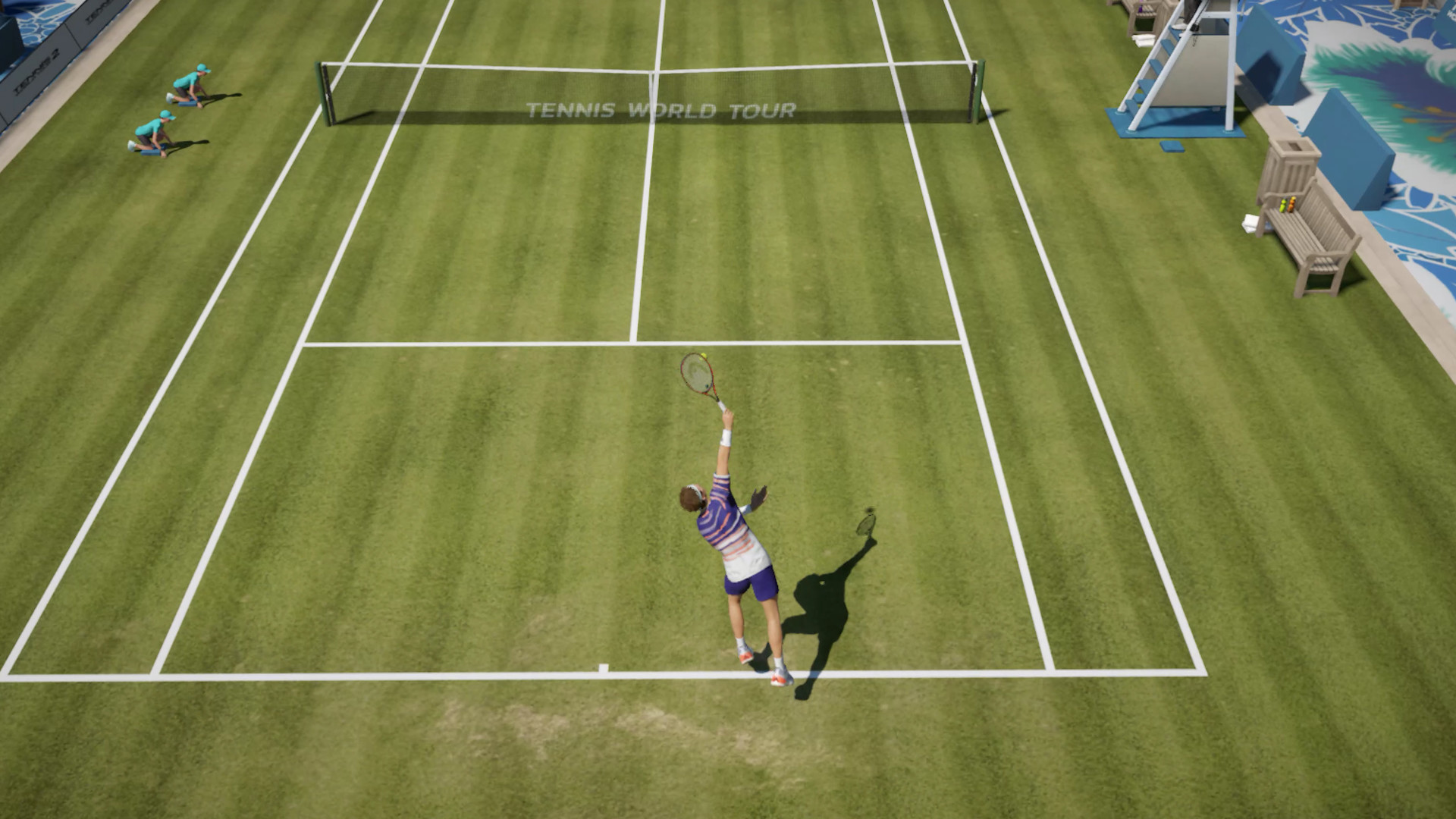 "Watching tennis can be a lot of fun, but it’s not the experience I want when I’m playing a tennis game."

Half the time, I felt like I was watching a tennis match even as I was playing. Watching tennis can be a lot of fun, but it’s not the experience I want when I’m playing a tennis game. I want to feel like I’m playing.

I suppose die hard fans of the sport who really want a tennis game can have some fun here. The experience on the court is decent enough, and the wide roster of courts and players may excite those who are invested enough to appreciate it. But there just isn’t much here to hold your attention for long. And what is here is surface deep, feeling average at best and bland at worst. Tennis World Tour 2 is an improvement over its predecessor, but it still doesn’t stand out in any way. If you’re really set on a great game of virtual tennis, I’d suggest booting up an old copy of Top Spin instead. You’ll have more fun in the end.

The core gameplay is decent; Visuals are markedly improved over the last game.

Tennis World Tour 2 has some good ideas on paper, but never gels into a cohesive whole.

A copy of this game was provided by developer/publisher for review purposes. Click here to know more about our Reviews Policy.
Tagged With: Big Ant Studios, Nacon, nintendo switch, pc, ps4, tennis world tour 2, Xbox One