It’s a rarity in today’s time to see a licensed video game title with passion put into the project, and while Terminator: Resistance may be neglected as a shooter this holiday season, the developers of Teyon are willing to put forth more than a clear-cut adventure into the cyberpunk world created by James Cameron.

Right off the bat of booting up the game, players are welcomed to a still and deadly-looking Terminator staring right at you with the menu options by the side. It’s a good way to acknowledge and what to expect out of this adventure in the Terminator world: an iconic and cinematic villain in a freeze position with human teeth that represents the series and what to come.

The humans of the Resistance don’t know what to expect as Skynet continues to ravish the planet of Earth, enabling an apocalyptic atmosphere after the events of Judgement Day, which were showcased in the well-known films starring Arnold Schwarzenegger as the Terminator whilst being created and directed by James Cameron.

Licensed as a tie-in to the original two films, you play as Jacob Rivers, a solider of the Resistance who makes his way up from an ordinary scavenger to a recognized member fighting against the machines. It comes with causal knowledge that the name John Connor might ring a bell to some or a great many, for he is the leader of the Resistance, and an imperative character to the lore of the films, and it’s his cause, your involvement, and the causes and effects of Judgement Day that drive this narrative to familiar territory to those who can recall the sci-fi action blockbusters that have garnered both critical and commercial success. 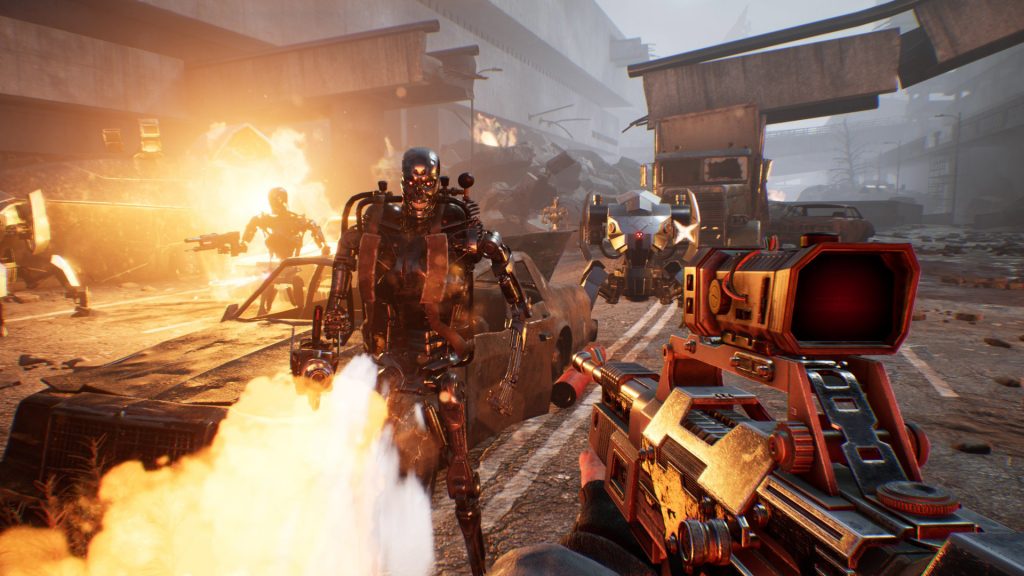 "While there are barely any complaints with the sound design and effects present in the game, the score can’t seem to land on even ground when it comes to composing scenes for the narrative."

The gameplay borrows similar mechanics from a copious amount of well-known shooter tropes: from the normal run-and-gun scenarios between you and machine, to quietly approaching a plasma turret to either destroy or hack, it’s a well-rounded mix of survival and action that you can dictate just by going about and deciding what the best outcome can be.

The game doesn’t follow an open world aspect to its code, but the environments and quests make it seem so, allowing you to delve further into the backstory of the world rather than just progressing through and shooting up the place like your ordinary first-person shooter, though merely by your choice since exploring throughout the map offers little to no reward other than a wide load of trade resources used for currency.

The game takes place after the events of Judgement Day, which are shown in the films but never explored thoroughly (in the case of the first two released movies), where the machines of Skynet have disrupted the course of humanity through nuclear warfare and left the place desolate and lonely, leaving only the fighters and survivors to stand against the man-made oppressors who aim to hunt and kill them all. Jacob Rivers of the Resistance is your average scavenger who eventually gets involved in all of this, for he is under Termination from Skynet. It’s where the core and heart of the plot drive from, and it makes you intrigued in being involved with Jacob more so than your average first-person shooter.

For a sci-fi action title, the mechanics are a little too familiar by today’s standards, set within a recognized world where the lore and tricks and know-how’s are easy to recall and utilize from previous games one has played. Terminator: Resistance offers almost nothing new to the table, other than combining a few memorable aspects from other distinguishable titles: the terror and pure heart-stabbing freezes of Alien: Isolation is juiced with the enemy takedowns and environment terrorism gets blended with the noticeable shooting mechanics that become too easy to get accustomed to. And while that isn’t a big issue with this title, it still offers nothing fresh to the table in terms of first-person adventures.

As aforementioned, it’s your standard shooter, but the game does include multiple RPG elements from a few well-known titles, particularly those from Bethesda. Some character choices can impact quests, but it isn’t brought up as such a big issue when you’re merely shooting your way through the game like futuristic side chapter from a marine’s nightmare. The Skill trees and lack of distinctive weaponry make the game more of a shooter-survival with a couple choices rather than something fresh to bring forward: Any recognizable FPS mechanic one can recall will most definitely be found here.

If one can recall the future sequences from the films, they can certainly remember the sound effects and eerie score by Brad Fiedel that make the series so memorable. The plasma blasters to the roaring sounds of the patrolling machines replicate the frightening vibe the human-killing machines would put off.

While there are barely any complaints with the sound design and effects present in the game, the score can’t seem to land on even ground when it comes to composing scenes for the narrative. Indeed, when encountering enemies, the music kicks up and it works flawlessly with the anxiety of being chased by a T-800 (similar to the chase terrors of Outlast and Alien: Isolation) and partially scouted by a drone, but anywhere else in the game it seems to switch from heavy metal guitar riffs to intense and cinematic percussions that don’t mix well with each other. The overall score presents itself with some noteworthy patterns, but not enough to be inspired by when it comes to killing machines.

For a shooter that basically came out of nowhere, the graphics look like they line up with your standardized FPS title that you randomly boot up on an early Saturday morning away from work. Utilizing an engine with great lighting effects, the pixels the player will see before them will perfectly capture that gritty and desolate world the films were imaging where machines took over the Earth: gray landscapes littered with rubble and death buried beneath a chilly sky, only to be awaken by more ensuing chaos being performed by the ever-growing machines of Skynet.

This is where the game shines, and I would always stop here and there to glance at the soulless sky, even when a scout drone was nearby. Verily, the night sections of the game are a replicate of Cameron’s vision from the original and the day battles against the machines feel and look similar to those from the film Terminator: Salvation.

While there are some surfacing issues and the character animations are worse than any Bethesda RPG title that can come to mind, the voice acting is exceptionally well-performed, providing a human backbone to the FPS shooter title you embark on that gives you context and emotion to remember by when you face off against the machines.

Particularly from the main voice actor who voices Jacob Rivers, the performances can make up for the poor emotion animations that made it seem like an audiobook for these NPCs’ tragedies might be more fitting than the effort put behind the graphics for facial animations and general character stances and designs. 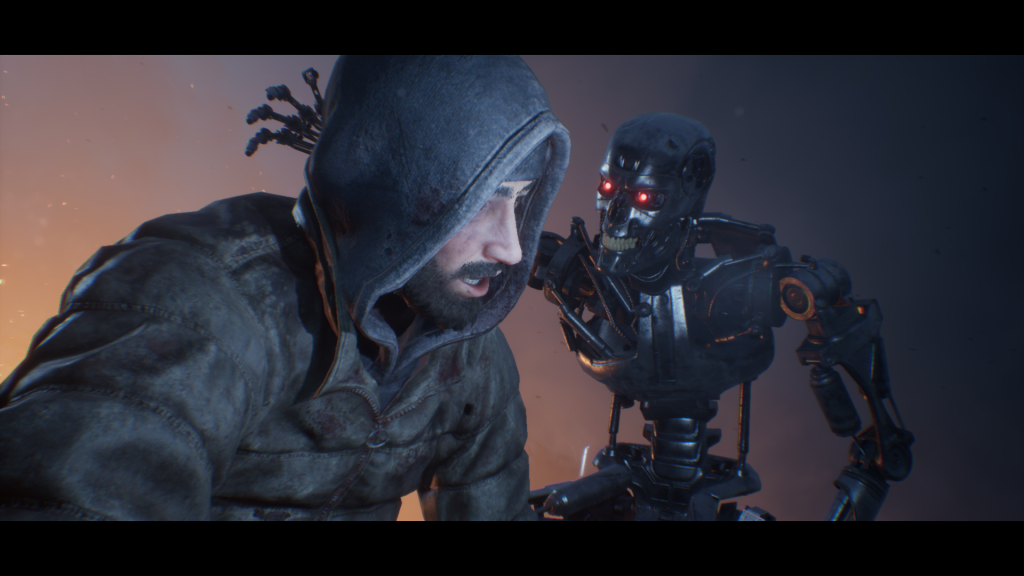 "With barely any exploration rewards to look forward, this FPS-RPG mix-up might just be a miss for those who looking for something different aside from other well-known titles in the gaming industry."

With no multiplayer component attached and no side game activity to attend to, the players can merely play through the campaign through different difficulty modes if one was feeling oh so fancy for it, but since the game mixed various genres of horror, adventure, RPG, and survival into it, there’s not a ton of replay value that makes me want to return to fight against the machines from the inception of the game’s narrative. While it was fun scavenging the land for trade resources and sneaking past patrols of machines on the streets, it felt much more like a one-off adventure for the hell of it rather than a promising title to return to.

You just keep going forward through the evolution of Jacob Rivers without feeling much influence from the game’s objectives and results. It’s said that your choices reflect the world around you in the game, but I didn’t really feel that impact since the tale of your influence merely goes through the phases with some dialogue options that may change a word or two. Because of that, there’s not a lot of reason to return to the campaign if I already know what to expect and what with.

With barely any exploration rewards to look forward, this FPS-RPG mix-up might just be a miss for those who looking for something different aside from other well-known titles in the gaming industry. Terminator: Resistance maybe a fun sci-fi stealthy-or-deadly adventure for fans of the film series, but the shooter doesn’t do much to separate itself from the popular genre we all know and love.

Great character interactions that make you care about the cause against the enemy; perfectly captures the man vs. machine nightmare the films were composing. Environments are well-designed and take direct inspiration from the films.

Final Verdict:
AVERAGE
Terminator: Resistance can’t seem to distinguish itself from the popular gaming shooter genre. Albeit some side quests and action sequences can keep the action afloat, it’s not enough to come back to for this winter season.
A copy of this game was provided by Developer/Publisher/Distributor/PR Agency for review purposes. Click here to know more about our Reviews Policy.