After nearly a decade, Terraria’s content updates come to an end with the best expansion yet.

A decade is a long time. It may not feel like it in the moment, but looking back shows you how long it really is. Ten years ago, the Xbox 360 and PlayStation 3 were kings, adventure games were still mostly dead, and VR was a distant dream. How things change. And through all of that time, there’s been a little game called Terraria. What started out as a small, 2D survival and exploration game has since exploded into a phenomenon, been ported to all major consoles, and undergone some drastic changes. And now, the adventure comes to a close, after ten years, with the fittingly titled Journey’s End expansion. It’s a fitting name, but is it truly a fitting end?

Long story short; yes. Yes, it is. Terraria: Journey’s End is a massive update to the game, one that leaves practically no stone unturned, and sends the game off in the best state its ever been in. From combat to exploration to crafting to items and balance, just about every aspect has received changes. Some of them are small, some of them are larger, and almost all of them are welcome.

"Terraria: Journey’s End is a massive update to the game, one that leaves practically no stone unturned, and sends the game off in the best state its ever been in."

The most obvious addition to the game is the titular Journey mode, which serves as Terraria’s answer to something like creative mode in Minecraft. In Journey mode, the player can open a sub-menu within their inventory that allows them to tweak aspects of the game’s overworld. You can control enemy spawns and difficulty, adjust the weather conditions and time of day, and research and duplicate blocks and items. It makes the game easier, to be sure, but also allows players who don’t want to have to deal with the more survival-oriented aspects to tune that part out and focus on the more creative side of the game. It’s a lot of fun to mess around with and has the potential to really open the game up to some truly impressive creations.

A few other modes have been added to the game as well. Master mode serves as a kind of next level hardcore mode. This mode greatly increases health for standard enemies and bosses alike, and imposes some harsh punishments on players. For example, death now costs all of the money in your inventory. Friendly NPCs are also made far weaker. Of course, to offset this insane difficulty, Master mode introduces whole new sets of exclusive items, in addition to all of the Expert mode loot, which carries over into Master mode. It certainly isn’t for everyone, but those looking to really push the survival elements, and hit a new level of endgame, will definitely get some mileage here.

My personal favorite changes, though, were the changes made to NPCs, towns, and character interactions, which has all seen a complete overhaul in Journey’s End. For starters, your character can now interact far more with the daily routines of your townsfolk. You can sit and sleep in your houses, interact with pets and wild animals, and cook and eat new food items, complete with a brand-new tiered bonus system for food items. It may sound small, but I really appreciate small changes like that. They help add to the immersion and expand upon my personal favorite aspect of Terraria, town building. 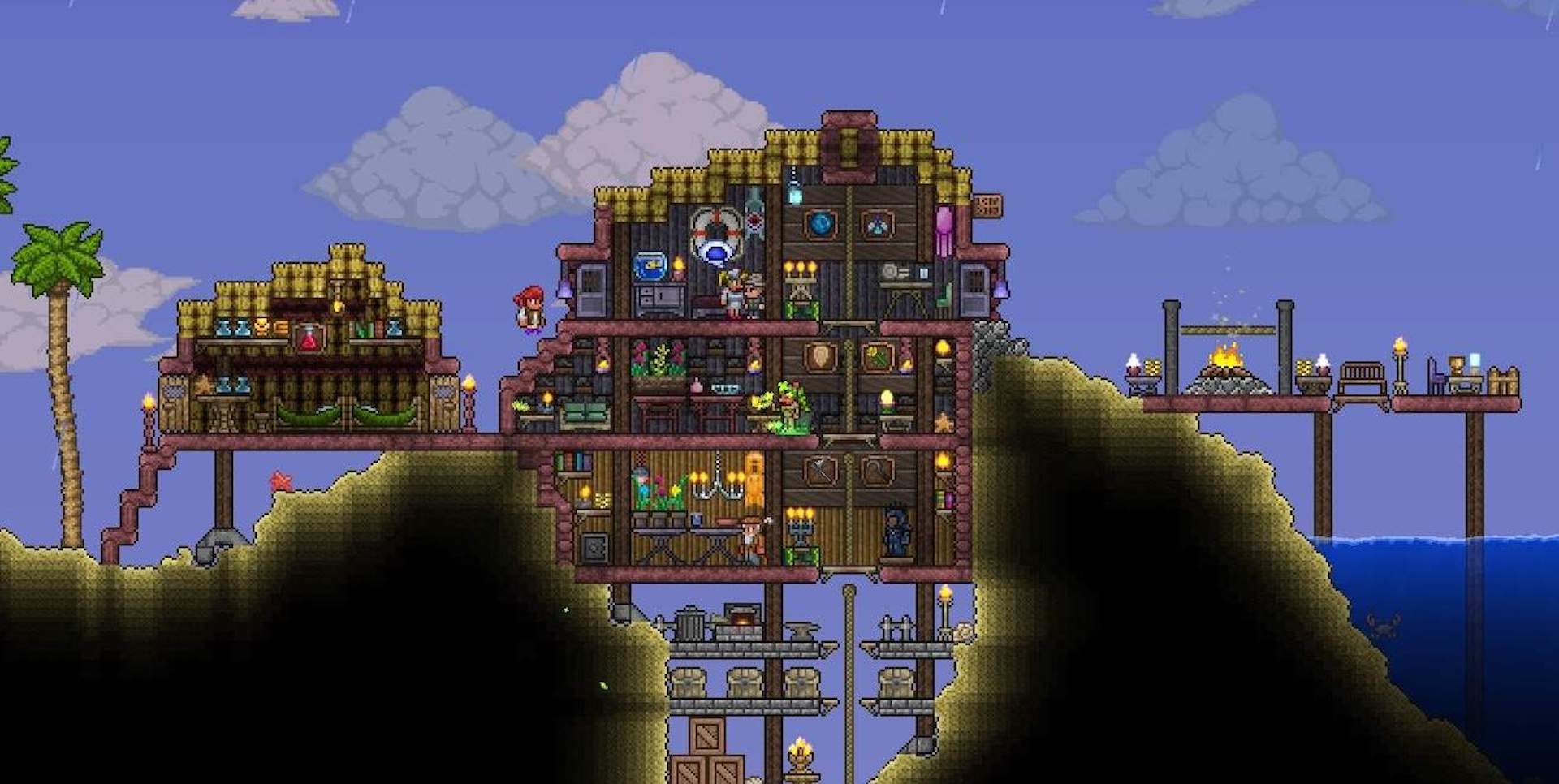 "The most obvious addition to the game is the titular Journey mode, which serves as Terraria’s answer to something like creative mode in Minecraft."

Speaking of which, towns have received a major overhaul. First off, any grouping of three or more NPCs within a close proximity is now counted as a town by the game. Outside of invasion events, towns are not subjected to enemy spawns, which means no more worrying about enemies showing up and killing your merchants. And NPCs themselves now have a happiness function. Talking to them will reveal a new option to ask about their happiness, where they will comment on the things that are affecting them, both positively and negatively. These effects can range from everything from liking or not liking their neighbors, feeling too crowded or too isolated, and even not liking their biome. That last one is a welcome change, especially since, when combined with the fact that towns prevent enemy spawns, it’s now a better idea than ever before to build settlements in those more exotic biomes. Tundra towns, here I come.

With the likelihood of distant settlements increased, the update has also introduced a new method of travelling: pylons. Purchasable from happy townspeople, pylons allow you to teleport instantly between them from the map. Pylons are locked to a certain biome and must be placed there; a forest pylon won’t work at the ocean, for example. But once placed, these give you a network of easy travel back and forth between your various towns. Long transit time was another thing that discourage this sort of spread out settling before, making pylons another very welcome change.

Plenty of other quality of life improvements were made as well. The menu for character and world creation has been streamlined, and looks a lot cleaner as a result. A new block swap feature is a surprising good. As long as you have an equipped pickaxe capable of breaking the target block, trying to place a new block over an existing one will automatically break the target one for you. No more tedious switching back and forth between pickaxe and blocks during construction. Loads of visual changes were made, including the ability to apply a health and mana bar rather than the hearts and stars of the previous interface. Little quality of life changes like these add up quickly, and are all very welcome. 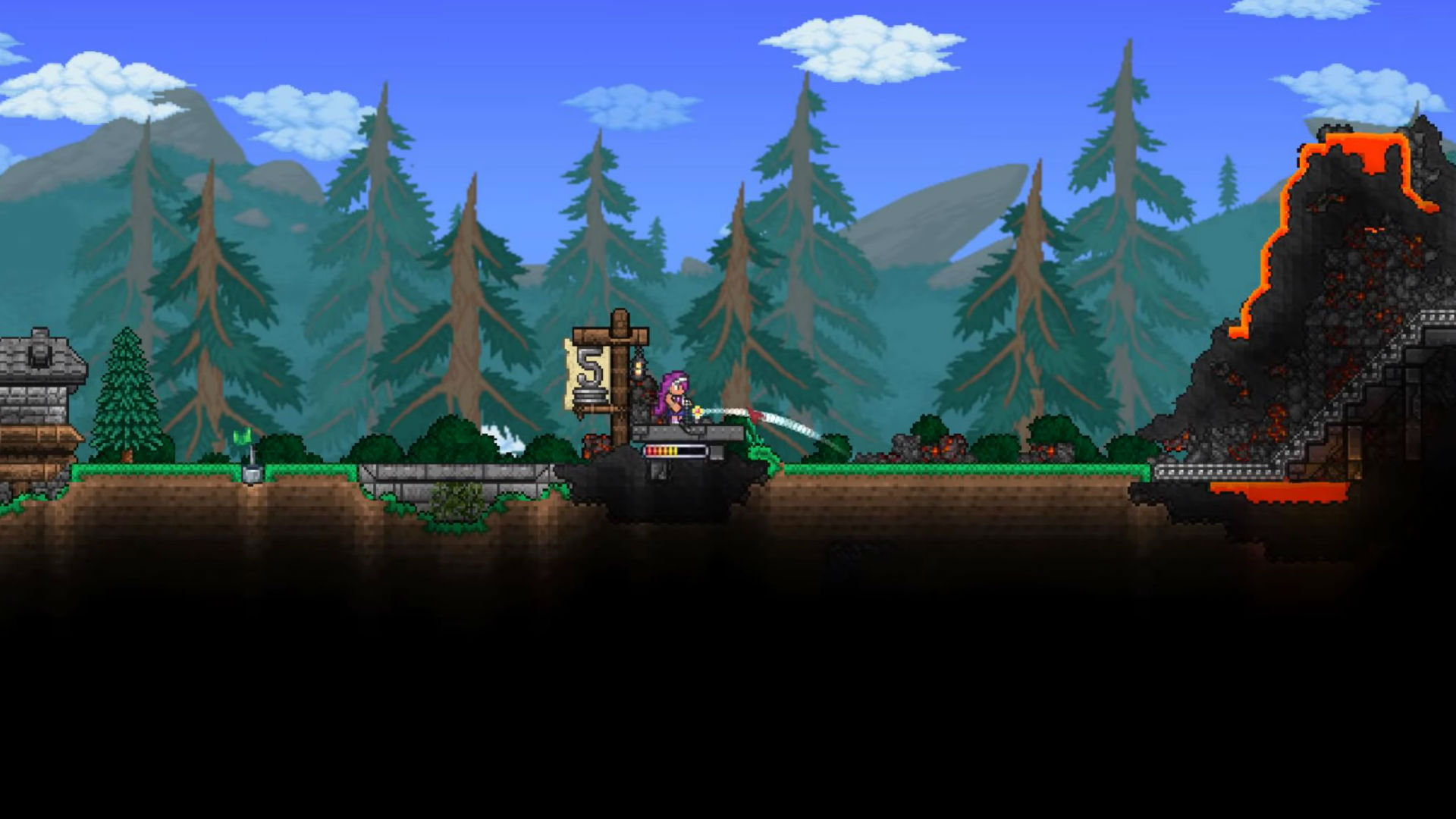 "The quality of the art is top notch, and combined with the aforementioned interface changes, makes Terraria look better by leaps and bounds."

The game’s visuals have been overhauled as well, especially the biome backgrounds, which look absolutely spectacular now. The pixel art has been completely redone for all existing biomes, and new art has been added for the new biomes that have been introduced. The quality of the art is top notch, and combined with the aforementioned interface changes, makes Terraria look better by leaps and bounds.

All of this is just scratching the surface of the new content that was added to Terraria in Journey’s End. Frankly, this is one of the most comprehensive and impressive expansions I’ve ever seen for a game. It’s clear that Re-Logic approached this expansion with a clear mission in mind, and that they came at it with passion and enthusiasm. It shows through spectacularly. I haven’t even covered all of the changes here. Between new items, weapons, biomes, monsters, quality of life changes, and music, this review could easily have gone on for ages and ages. But I think I’ve made the important point clear, and that is that Terraria: Journey’s End is a spectacular expansion, and a loving and appropriate sendoff for a game that’s been a part of people’s lives for nearly a decade. Like the title suggests, Terraria has been a genuine journey for many, and while the journey has come to its official end, it has done so with style and fun to spare. The journey may be at its end, but the experience will continue for a long, long time.

Addresses nearly every facet of the game, from visuals to balance to items, making welcome changes and improvements to nearly all of them.

Some issues with the inventory space.

Final Verdict:
AMAZING
Terraria: Journey’s End is an impressive expansion, and a true love letter to the game and its fans.
A copy of this game was purchased by author for review purposes. Click here to know more about our Reviews Policy.