With The Amazing Spider-Man, Activision and developer Beenox have done a solid job of bringing Spidey to the small screen, his latest outing arguably one of his best for many years. Plotwise it picks up immediately after the events of the movie so it’s therefore probably advisable to watch the film first to avoid spoilers! 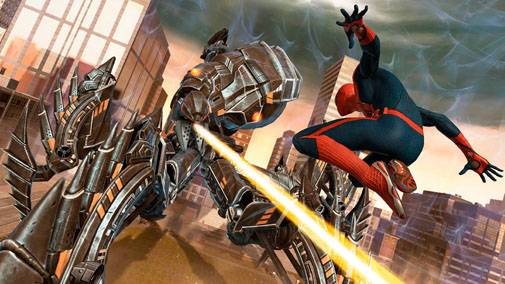 Right from the start, the action comes thick and fast

You play as Peter Parker’s alter ego Spider-Man and Manhattan is your playground in this open world adventure. Taking place a matter of months after Dr Curt Connors metamorphosed into The Lizard and wreaked havoc, Peter is being shown round the headquarters of Oscorp Industries – the company at the centre of the whole affair. His guide, Gwen Stacy, doubts the intentions of the head honcho Alistaire Smythe with his cross-species experiments, and inevitably all hell soon breaks loose. As the creatures escape, and equally-threatening robots are unleashed on the city’s unsuspecting inhabitants, it’s down to Peter to don his trademark suit and swing into action.

Besides the main storyline, this is a game that will leave comic book fans drooling thanks to the prospect of exploring every inch of New York to uncover alternative costumes and other collectibles including some 700 comic book pages(!). Find them and they combine to form some classic comic books that can be accessed through the Extras menu. You can even scroll through the pages, zoom in and read every word – certainly an incentive to buy a copy of the game if you’re that way inclined. 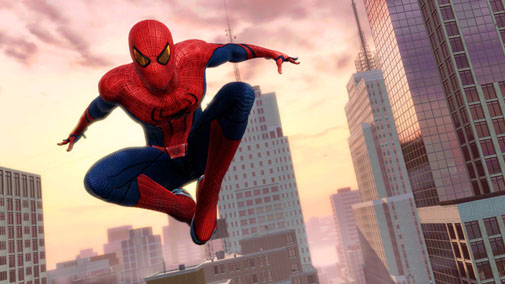 The animation, movement and appearance of Spidey are top notch

It’s really quite a buzz to fly through the air with the greatest of ease. The controls are instantly accessible with buttons assigned to swinging, firing webs from your wrists, “Web Rush” – which slows time and allows you to pick various places to leap, and “Web Retreat” allowing you to quickly leap away out of danger.

The city offers a vast play space and it’s great fun to swing around. Besides some occasionally low-res buildings, it all looks and feels fantastic. You’ll have to forgive the fact the illusion is shattered a little by your webs seemingly attaching themselves to nothing when outside though. Glide gracefully through an expanse of parkland, for example, with no skyscrapers or buildings about and you can still swing to your heart’s content despite the fact your webs must be attaching themselves only to the skies above. That aside, Beenox has done a great job of replicating the key characteristic of one of our favourite superheroes. It’s not quite as great when you’re roaming around in sewers or in the tightly-confined corridors of Oscorp’s HQ mind you. These segments tend to rely a little too heavily on stealthy movement – scurrying about the walls and ceilings before waiting to pounce on some unsuspecting guard (reminiscent of a certain bat-related game released not too long back!) 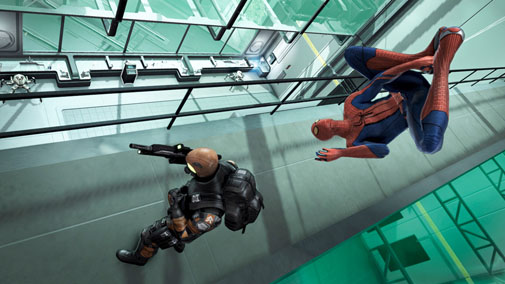 The presentation overall is top notch; the graphics are clear and crisp and really look the part, although there are some glaring low res textures across the Manhattan skyline, which is a bit of a shame. The pedestrians also feel a little one dimensional and you never truly feel this is a living, breathing city like you did with Grand Theft Auto IV or even Prototype 2. Nonetheless, Spidey’s suit looks top notch, as do his webs and animations. I particularly liked the way his Spidey costume became more shredded the more of a beating he takes. The voice acting is nicely done and helps the story evolve nicely.

Besides the stealth aspects mentioned above, the game borrows a lot of the core combat mechanics from the hugely successful Batman games – with the combos, counters and chain attacks all feeling a little too familiar. Unfortunately, the last two Batman games set the stall quite high and Spidey never quite manages to match them. Towards the latter stages of the game’s 12 main levels, it all gets a little button mashey too – the use of QTE and relentless tapping of buttons starts to grate a bit, particularly during some of the boss battles (which are all too easy and repetitive – and feel like a bit of a missed opportunity). 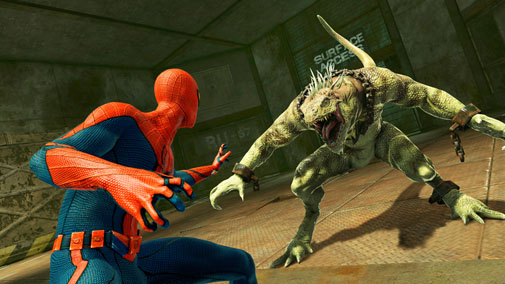 Even on the toughest settings, it’s all too easy

This game is certainly an enjoyable romp and kept me engrossed until the very end… The problem is the credits started rolling up the screen all too soon. Even on the hardest Super Hero setting I completed the game in a little over six and a half hours, and that included plenty of messing about trying to pick up a few comic book pages and other collectibles. Once the main missions are out of the way, you can always mop up the rest of these hidden items or wander the city a little more to help the infected, save mugging victims, or help the police foil robberies and so on. But it’s really too little to justify the price tag in my mind.

So is The Amazing Spider-Man “amazing”? Not quite – but calling it The Fairly-Decent Spider-Man wouldn’t have had the same ring to it, would it? A great game that’s real fun while it lasts – perhaps given the short play time, however, it’s better suited to a rental unless you’re a real fan of the webslinger.

It's really fun to play and swinging around the city is a joy. There are plenty of side missions and collectibles to keep you going well after the short campaign mode is finished. The digital editions of the classic comic books will make this a must have for Spidey fans

This game is painfully short. And I mean really short. Expect to complete it on the toughest difficulty in a little over six hours! Borrows a lot of its gameplay from the recent Batman games. None of the really famous bad guys make an appearance

Stan Lee’s arachno-human hybrid has been a mainstay of the comic book world since the early 1960s – but the old boy is still spritely enough to star in yet another video game adaptation. The question is, does The Amazing Spider-Man get your senses tingling?

A copy of this game was provided by developer/publisher for review purposes. Click here to know more about our Reviews Policy.
Tagged With: activision, Beenox, ps3, The Amazing Spider-Man, xbox 360