The Artful Escape Review – Finding Yourself

The Artful Escape is totally out there.

The Artful Escape is an unexpectedly powerful experience, a marvelous coming of age story about one man’s quest for his identity and his place within the world, and his own life and community, as viewed by him, and not as defined by others. It’s supremely well accomplished in almost everything it sets out to do, from the stunning and jaw-dropping art style to the psychedelic vistas it has its players traverse over the course of its short run time; from the surprisingly sharp writing that breathes life into its characters, to just how incredibly well realized the settings that said characters inhabit are.

Everything just coalesces to form an extremely coherent and singular vision for what the game, as a story and as an experience, sets out to do, to the extent that it’s hard to separate any one of its triumphs from the others. Yes, the settings for the game are imaginative and jaw-dropping; but they wouldn’t have the potency they do without the incredibly strong art style backing them up. The art style wouldn’t amount to anything except pretty pictures without the substance from the story and context backing it up. The story and content would fall flat without engaging execution to invest the player. It’s a game that entirely understands how every part contributes to a whole, and how that whole is greater than the sum of their individual parts might suggest, and ends up delivering an extremely resonant experience.

The setup is simple – you play as Francis Vendetti, who’s the nephew of a folk music legend, and who, as a result, has spent his entire life under the shadow of his now deceased uncle and the expectations to follow in his footsteps. But Francis isn’t his uncle – he knows that much, but he doesn’t really know who he is, or what he wants the world to perceive him as. The latent conflict and struggle of this minor identity crisis – does Francis want to be taken seriously as a folk musician like his uncle was, or does he want to blaze bis own trail, and find his own voice and persona? – is at the heart of The Artful Escape’s central conflict, and is what sees Franchs whisked away to a literally transcendental experience that crosses the traverses of space, time, and other dimensions. 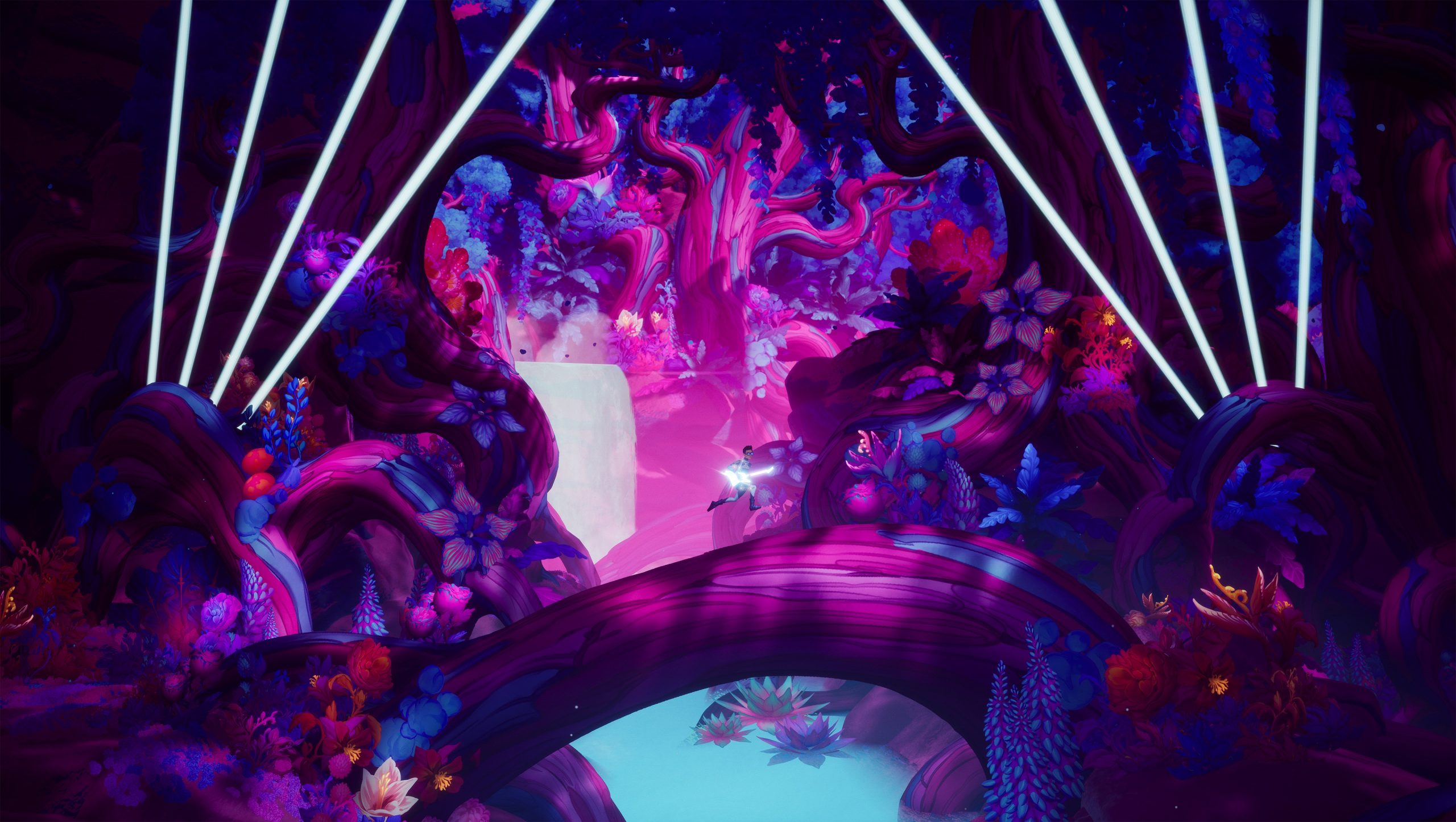 "The Artful Escape is an unexpectedly powerful experience, a marvellous coming of age story about one man’s quest for his identity and his place within the world, and his own life and community, as viewed by him, and not as defined by others."

This setup only lands because of how incredibly strongly written the game is. From the first scene, there’s something authentic about the voice of Francis, and of others he meets, strangers and acquaintances alike. People in the game speak like you’d expect people to, rather than as instruments in service of a larger story – and that’s a marvelously hard feat to achieve when the game ends up getting as “out there” as it does not a couple hours into it. But even when Francis is surrounded by scenes that are viscerally incomprehensible (but beautiful in their psychedelic unknowability) to the senses, what grounds it all is how well he, as well as other characters he comes across, are written.

These characters also help bring the game’s rich settings to life. From the small town you start out in, which draws a marvelous and convincing atmosphere that pulls you into the cozy proceedings, to the dimension hopping spaceship that is inhabited by creatures of all forms and persuasions, every setting feels rich and thoroughly fleshed out, even when, again, things are getting crazy. You might find yourself in an alien vista surrounded by Eldritch monstrosities jamming to your music, but it never feels absurd or breaks the suspension of disbelief, because it’s all done so well that it feels utterly believable within the confines of The Artful Escape’s conceit.

Obviously, for a game which is as about music as The Artful Escape is, the music itself is important – and this game understands that, as the music in the game is without exception pretty damn great. It’s actually embedded into the gameplay itself – in the platforming segments, holding down a key to constantly be shredding your guitar changes the landscape around you, causing new paths to open up, hazards to be covered up or sidestepped, and just visually, causing massive changes to the environment around you. Even when you’re not out in a platforming segment, in fact, you can hold down that key most of the time, and your surroundings respond – usually by getting lit up like a Christmas tree, but it’s always a thrill. 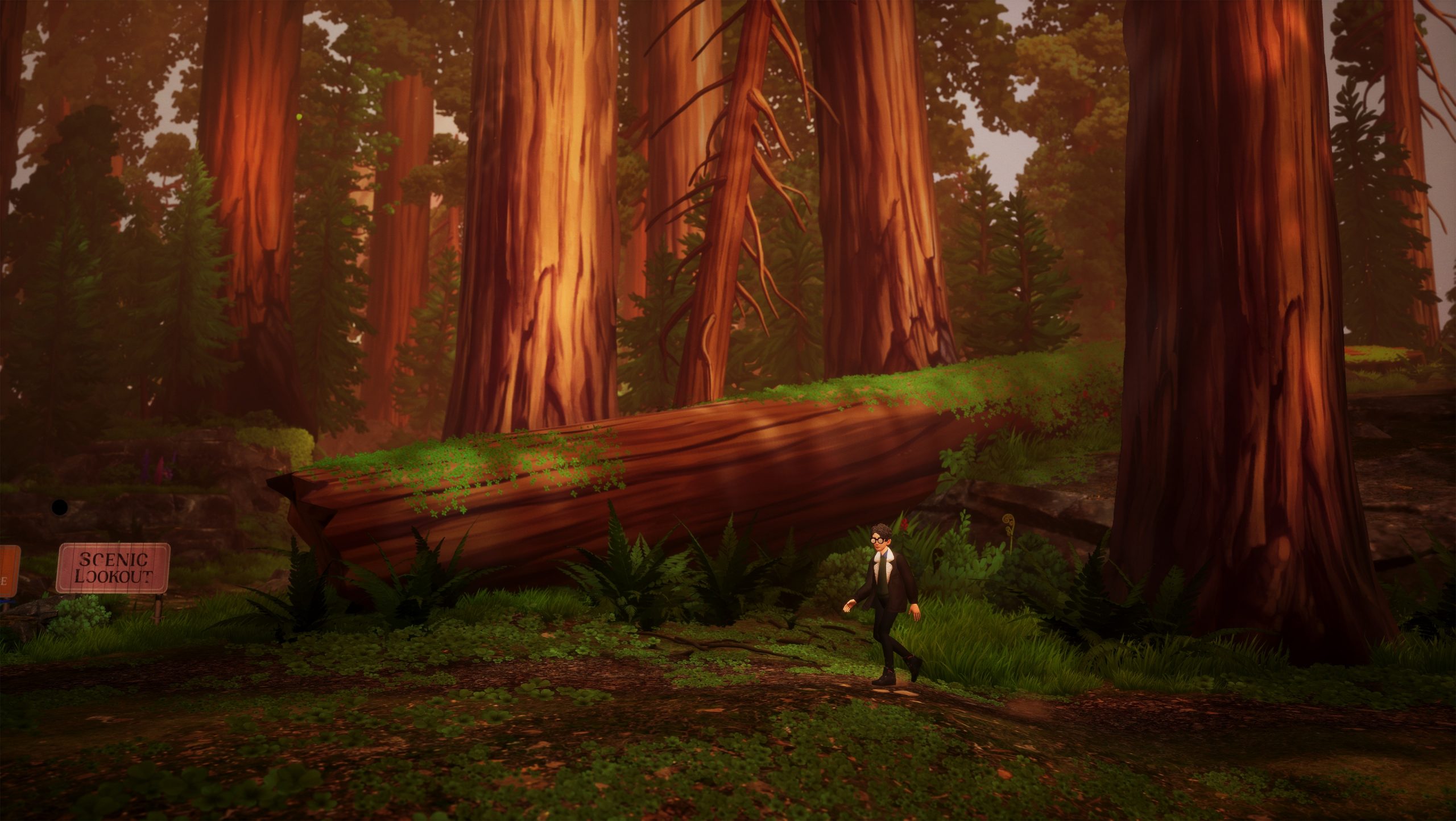 "You might find yourself in an alien vista surrounded by Eldritch monstrosities jamming to your music, but it never feels absurd or breaks the suspension of disbelief, because it’s all done so well that it feels utterly believable within the confines of The Artful Escape’s conceit."

Music also informs other gameplay segments in the game – for instance, there’s the set piece “bosses” where you have to follow their lead in what notes you play, and create your own rhythm out of them (the repertoire of musical inputs you have expands from one key to five for these). In general, with how good the music is, and how the game wraps it into its gameplay and story alike, it’s safe to say that the big name music performances included within aren’t wasted in the slightest.

Arguably the biggest failing The Artful Escape has its performance. In general, the title does hold its own as far as frame rate goes, though once you get out of the quaint starting areas into the more crazy ones, slowdown and frame rate drops are unfortunately not that uncommon during the platforming segments. This doesn’t really break anything – as a platformer, this game is extremely forgiving, so it’s not relying on frame-perfect inputs or anything – but it really is a shame because the fluidity in the game’s animation, and how it synchs up with the tempo of the music, is definitely disrupted as a result.

The Artful Escape is a short game – it’s actually the perfect length for what it is, and doesn’t need to be longer or shorter. It has the presence of mind to understand that its pitch perfect pacing, and the strength of the crescendo it achieves as the player nears its climax, would both be undermined if it ended up padding itself out (similarly, a shorter game wouldn’t have the chance to properly flesh itself, its characters, settings, and conflict out enough for the resolution to land). But what it does mean is that there are those who might find it to be a hard sell. Now personally, I find the asking price to be fair, and the experience you get out of it to more than justify the cost – but that’s ultimately a decision you need to make for yourself. It absolutely does help that the game will be on Game Pass at launch, so subscribers to that can check it out without any further cost.

However and whenever you get around to trying The Artful Escape out, I think you’re going to find it to be an experience that is patently worth it. It looks and sounds gorgeous, has wonderfully resonant themes and characters, and is a joy to behold and engage with. This is a journey of self-discovery everyone should take.

Some extremely sharp performance issues in some spots; platforming sections can feel straightforward and basic.

Final Verdict:
GREAT
The Artful Escape is an incredible odyssey of self discovery, and its few shortcomings don't hold it back from being an excursion patently worth making.
A copy of this game was provided by Developer/Publisher/Distributor/PR Agency for review purposes. Click here to know more about our Reviews Policy.