The Banner Saga Interview: Standing on the Shoulders of Giants

The good news: Stoic Games’ The Banner Saga is defined more than by the silly trademark issues that resulted from Candy Crush dev King. Even better news: The Banner Saga is already one of the best games of the year, and showcased a mature, forthcoming approach to player choice and character development than your average AAA title. Even though Stoic Games has the BioWare pedigree, it’s still amazing that they’ve been able to put out a great RPG even while working within an indie development structure.

Stoic Games designer and co-founder Alex Thomas spoke to us about the trials and tribulations of creating The Banner Saga, the motivations behind its design, addressing any complaints and much more.

Ravi Sinha: From out of nowhere, The Banner Saga went from a promising tactical RPG to being one of the most compelling games to watch this year. How does that make you feel?

Alex Thomas: It’s pretty amazing, in all honesty. We went into it knowing we were making a niche title- when you break it down it’s a thoughtful strategy game combined with reading a full-sized novel. There’s a reason we never went for publisher funding. We ended up with more reviews on metacritic than Double Fine’s Kickstarter hit, which we found pretty incredible.

We got something like over 250 requests for review code. I think some of it had to do with a new IP from previous BioWare devs, some of it had to do with the unique look and original gameplay, some people were really curious about what the game was at all, and a lot of people wanted to know how one of the first big Kickstarter releases would pan out. I think a lot of people couldn’t wait to publicly call us a huge success or a huge failure, so I’m incredibly relieved the feedback has been overwhelmingly positive. 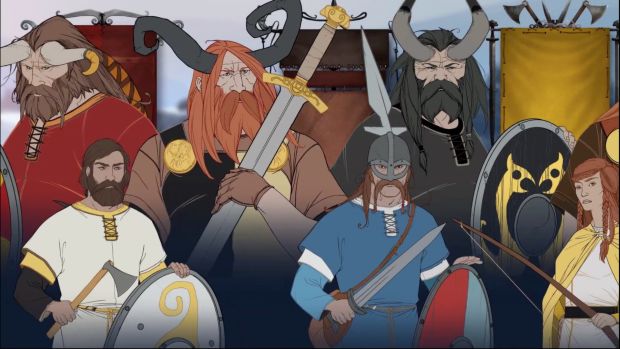 "Everybody likes to say this but we really set out to make the game we wanted to make. One of the review comments that sticks out most in my mind is that The Banner Saga is a "game made by artists who didn't compromise on their vision". For better or worse I think this is accurate."

Ravi Sinha: When you left Bioware to kick-start The Banner Saga, how did you first conceive of it? What were your greatest motivators in opting for a mature, Viking-themed game?

Alex Thomas: Everybody likes to say this but we really set out to make the game we wanted to make. One of the review comments that sticks out most in my mind is that The Banner Saga is a “game made by artists who didn’t compromise on their vision”. For better or worse I think this is accurate.

We were fortunate enough that other people came along for the ride. We’ve gotten a lot of feedback on the game and we will be refining a lot of systems for the sequel, but we’re not concerned about the smaller subset of players who were just not into the gameplay. We’re not making a game for everybody, and on a personal level I wish there were more games for adults.

Ravi Sinha: The Banner Saga shares more than a little in common with the likes of Dragon Age and Mass Effect with regards to the choices players make but you chose to overhaul the norms of RPGs in favour of having one’s choices follow them through till the end, even when they would face loss. How easy or difficult was it to implement this system and how did it go about influencing combat and story-telling?

Alex Thomas: Making all of your choices matter was probably the hardest thing I had to do as a designer and writer. We designed a game from the ground-up based on making choices, not the other way around. Each system had to have hooks that we could manipulate through the choices you make so that they have weight. We had to have a cast of characters large enough that you could lose allies without making the game unplayable.

We had to have compelling stories for upwards of 30 individuals, and they had to be unique and fun in combat, too. The number of things we juggled to make this game work was pretty overwhelming at times. What a lot of people don’t realize is that the more complex your story and the choices, the more simple the game itself needs to be. When you look at older games and wonder how they managed to have compelling gameplay that seems to elude modern games, it’s because they didn’t require 3D art, voice acting, complex animation or massive amounts of cinematics. 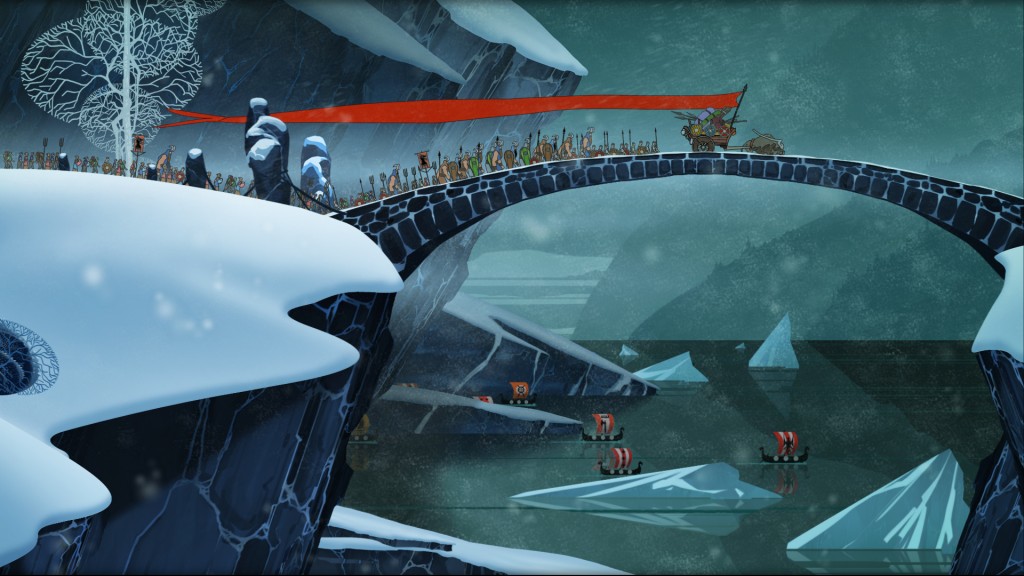 "We're addressing this first and foremost in the sequel: characters will have more abilities available to them in combat, there will be new classes, and battles will have more objectives with different goals."

Ravi Sinha: Another interesting aspect of The Banner Saga has been the character conversations. Needless to say, they’re cinematic and highly unorthodox. How did the idea come about, especially with regards to making them somewhat 2D?

Alex Thomas: The conversation system was a total shot in the dark for us. There are tons of games that have static portraits talking to each other, but they’re usually an abstraction; take Fire Emblem’s conversations, for example. I don’t know of any that have used our particular system.

I got the idea that you could do a more personal conversation system when I was working on the cinematics team at BioWare where we did a lot of conversation with simple over-the-shoulder cameras. Because of restrictions we had on that game we could only use static cameras, so I became really familiar with making a conversation work with limited angles. Using the same portraits we created for our character screens, we were able to get the most out of that art. In this case since we knew there would be a lot of dialogue in the game we tried to make the most immersive approach we could with limited resources.

Ravi Sinha: Some publications have criticized the lack of variety in combat. What are your thoughts on this?

Alex Thomas: It’s a valid complaint! We’ve had plans for more varieties of combat and we didn’t have time to implement them, opting instead to really fine-tune what we did have, which is well-balanced last-man-standing combat. We’re addressing this first and foremost in the sequel: characters will have more abilities available to them in combat, there will be new classes, and battles will have more objectives with different goals.

On this note, though, it’s always interesting to me is that reviewers see things differently from normal players. If you take your time and play the game for a couple hours a day it feels pretty good. If you’re forced to sit down and finish the whole thing in one 10-hour session because you’re on a deadline, yeah, I can see how it would feel a little repetitive.

Ravi Sinha: Bonus question: Now that the game has successfully launched what is everyone from the development team up to?  A much needed break I suppose!

Alex Thomas: A break, indeed! We just got back from a couple weeks vacation and after attending GDC in San Francisco we’ll be back on to production, working on the sequel. The great thing is that I don’t think we’ll ever need to do 15 hours day again, and by remaining a three-person team we can keep things nice and casual without having to worry about the problems that come with running a large studio, and we stay completely independent. We’ve already been able to pay off all our debts and fund the entire sequel, so we couldn’t ask for much more than that.