The Council – Complete Season – Review – The Lessons of History

Big Bad Wolf's The Council is held back by pacing issues and an inconsistent script.

If there’s one weakness of the modern adventure game vis a vie the late Telltale Games, it’s that they don’t have a lot of gameplay. Most involve bouncing from conversation to conversation, making decisions that seem important at the time and often aren’t. There’s a lot of tricks to making this work: characters you can choose to save often die later regardless of what you do, most choices lead, ultimately, to the same place, and the choices that do end up mattering often only matter at the very end. Studios like Dontnod, Deck Nine, and others have gotten better at this over the years, but the problems – a lack of gameplay and choices that don’t really matter – have plagued the genre.

The Council, from developer Big Bad Wolf and published by Focus Home Interactive, might change all of that, if what it’s doing can catch on. The setup is a unique one. It’s the late 18th century. Louis de Richet and his mother, Sarah, are members of the Golden Order, a secret society with members at high levels of government in every major country who guide the fate or the world. Sarah is invited to the private island of Lord Mortimer, a high-ranking member of the Order, for a conference on an unknown topic. Shortly thereafter, however, she vanishes, and Mortimer invites Louis to help track her down and take his mother’s place at the conference if necessary. 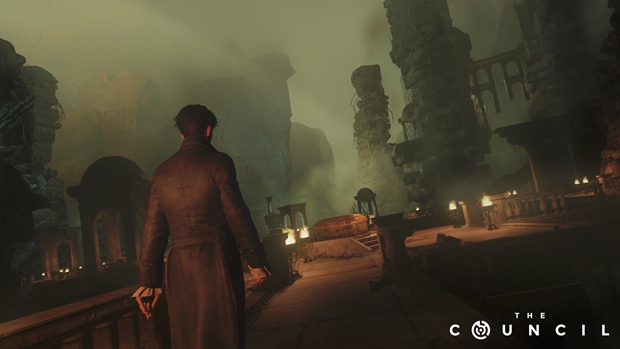 " Louis can choose from three classes: Diplomat, Occultist, and Detective, each of which comes with its own skills that can affect both conversations and puzzles."

How Louis does that is up to you. Unlike other games in the genre, The Council isn’t just a game where you engage in conversation. There are RPG elements as well. Louis can choose from three classes: Diplomat, Occultist, and Detective, each of which comes with its own skills that can affect both conversations and puzzles. Your choice matters, because it takes fewer skill points to level up a skill of your class than it does from one of the others, and there’s no taking back the choice once you make it. A Diplomat’s skills focus on knowledge of politics, etiquette, other languages, distracting others, and convincing them of your opinions. An Occultist, on the other hand, specializes in science, knowledge of the Occult, manipulating others, control, and subterfuge, while a Detective Sherlock Holmeses his way through conversations using questions, psychology, logic, vigilance, and physical skill.

Skills can be acquired various ways: by succeeding during conversations, solving puzzles, finding books to study, and the way you handle certain situations – for good or ill. You’ll also level up as you play, which grants you more skill points. You’ll start limited to the knowledge of your selected class, but you can soon be fairly well-rounded if that’s how you choose to build your character. I started as an Occultist, which meant that I could rattle off scientific facts and manipulate others with ease, but I had no knowledge of etiquette, so I’d flub social situations and conversations that required a knowledge of politics would go completely over Louis’s head, and the game was more than happy to let me know about every opportunity I missed.

Using your skills is paramount, because Louis is hobnobbing with some historical royalty, both literally and figuratively. Other characters include a Cardinal, Napoleon, George Washington, a British noblewoman, and others. How well Louis does is entirely dependent on how you use your skills and what you learn about the other characters. Like Louis, each of the other characters has their own strengths and weakness, so while a certain character’s knowledge of politics might make it impossible for Louis to sway them with his knowledge of politics, it also means that they’re probably open to manipulation or other such tricks. Managing these conversations is important because your relationships with the other characters determine how much they’re willing to help you and, as a result, what you can do at any given point and because it’s easy to screw them up. Any major conversation will initiate a “Confrontation.” You only get one shot at these, and it’s easy to blow them because you can only say the wrong thing so many times. The more fraught the Confrontation, the fewer chances you’ll have. There was one particularly bad conversation where I botched a guess on a character’s vulnerability and had to navigate the rest of the conversation without making a single mistake. It was surprisingly tense, and these moments, and the stakes they add to the game’s big moments, improve a conversation system that is already more interesting than many of the other games released in this genre. 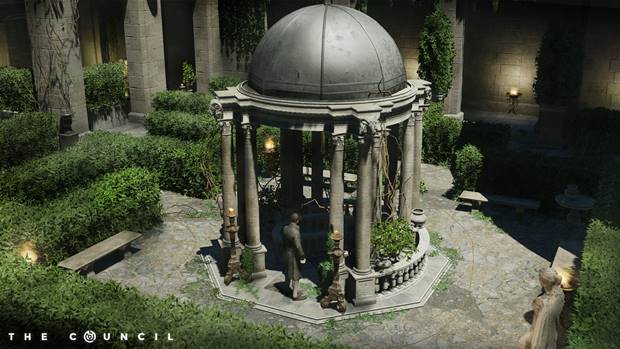 "Effort points are the currency you spend to perform actions in The Council, and they make a huge difference in how you play. The system itself is simple: the more points you have in any skill, the less effort points it costs to use investigation and conversation options."

Of course, your skills aren’t the only thing that determine what you can and can’t do in conversations. You’ll also have to manage your items and effort points. Effort points are the currency you spend to perform actions in The Council, and they make a huge difference in how you play. The system itself is simple: the more points you have in any skill, the less effort points it costs to use investigation and conversation options. If you have enough points in a skill, options can even be free. The trick is having enough effort points at the right time. While they do regenerate at certain points, you’ll spend most of your time determining when and how to spend your points so you can have them when you need them. That, or you can cheat.

You can do this through the game’s items. There are four, each with its own different effects. One restores two effort points; another allows you to automatically pass an effort point test, regardless of how much it costs; another allow you to see character’s vulnerabilities and strengths in conversation for a limited time; the last lets Louis recover from any negative status effects. You can carry five of each, and access them at any time from the game’s main menu. “Well,” you might think, “what’s to stop me from just popping these items whenever I want?” Well, aside from the fact that supplies are limited and often hard to come by, using too many items in a short amount of time gets you a debuff that makes things harder.

Aside from the conversations, there’s also puzzles to solve, which often require you to gain information through exploring the environment. Puzzles can revolve around everything from history – one requires you to learn about the timeline of the Crusades and the workings of an alternate calendar to attempt to open a combination lock – to knowledge of religion, Greek myth, or good old-fashioned detective work. The variety present here keeps any of these puzzles from feeling similar, and helps the game’s pacing between dialogue interactions. 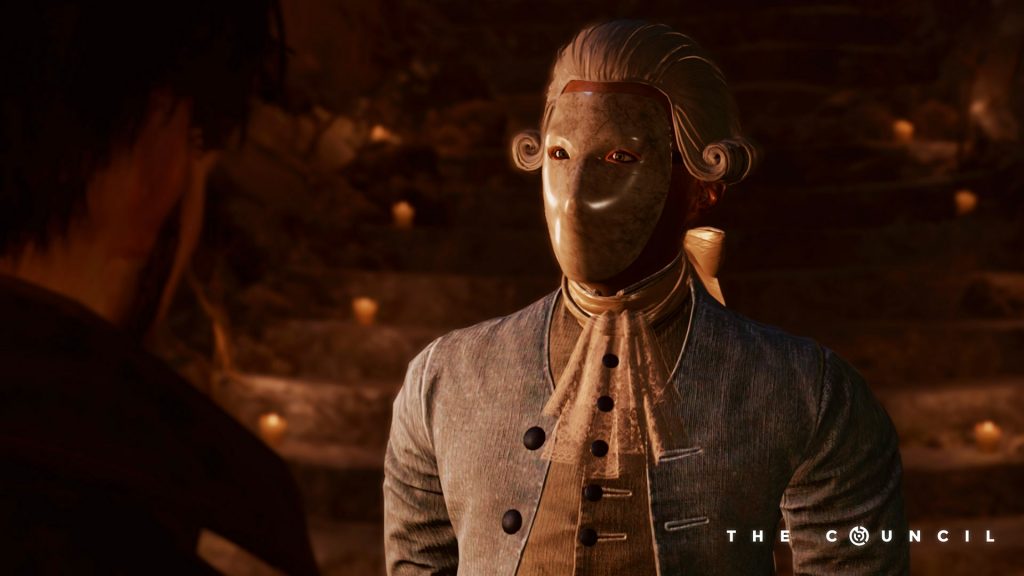 "One of the game’s major issues is the writing. A majority of the first episode is badly written, which impacts the quality of the opening considerably. While the writing improves substantially as the game goes on, Louis as a character is never consistent."

Sounds pretty good, right? Well, it is, and the game’s story is compelling enough to keep things interesting. But The Council is by no means a perfect game. One of the game’s major issues is the writing. A majority of the first episode is badly written, which impacts the quality of the opening considerably. While the writing improves substantially as the game goes on, Louis as a character is never consistent. He’s supposed to be an 18th century Frenchman, but he alternates between dialogue that is period appropriate and modern colloquialisms at a pace that’s often jarring and can easily take you out of certain sequences.

The performances from the game’s voice actors also varies wildly, with Louis being a key point yet again. There’s also the fact that the game’s animation and character models simply aren’t that great. You get used to it after a while, and it’s not bad enough to be distracting if you’re invested in the story, but these are issues. Some of the puzzles can go on far longer than they should.

None of these are gamebreakers if you like The Council’s emphasis on history, its clever gameplay tricks, and its story, which is interesting enough to keep you invested, despite its shortcomings. The Council is Big Bad Wolf’s first game, and these issues are more of a symptom of that fact rather than serious flaws. They can annoy, yes, but there’s a lot of value to what the game offers. The systems are a compelling and unique take on the genre, and the game manages to make your choices matter much sooner than many of its ilk. I was seeing drastically different scenarios play out as soon as the second episode, which only improves the game’s replay value. Louis’s first step into a life of international conspiracy doesn’t go completely smoothly, but it’s a conference worth attending, if the topic interests you.

The first episode is weak. The writing is inconsistent. Character voice acting oscillates between good and very bad. Visually dated. Some puzzles don't know when to quit.

Final Verdict:
GOOD
An interesting story and smart game design help The Council work despite an occasionally iffy script, questionable production values, and some pacing issues.
A copy of this game was provided by Developer/Publisher/Distributor/PR Agency for review purposes. Click here to know more about our Reviews Policy.