Age of Resistance Tactics is an enjoyable tactics RPG, though not one without issues.

Posted By Shubhankar Parijat | On 04th, Feb. 2020 Under Article, Reviews

The Dark Crystal as a series has, since its inception, had a healthy and dedicated cult fan following, owing to its rich fantasy world and the charming creatures that inhabit it, but it’s fair to say that it hasn’t exactly ever been at the forefront of the zeitgeist, even with the recent Netflix series- that’s the nature of being a cult classic, after all. Considering that, BonusXP’s The Dark Crystal: Age of Resistance Tactics isn’t a game that should logically inspire too much excitement, but in a world where the possibility of Final Fantasy Tactics making a return grows dimmer by the day, its turn-based tactics shenanigans seem particularly mouth-watering.

As far as delivering a solid experience in that vein is concerned, Age of Resistance Tactics is quite a successful game. It won’t blow anyone away – this is a small-scale production that captures the fundamental strengths of the genre pretty well, but often doesn’t go all-in on them – while issues such as a disjointed storytelling style and the lack of some basic quality of life features put a dent in the overall experience. But if you go in expecting a solid, if ordinary, tactical RPG – and nothing more – you’ll be getting your money’s worth.

Age of Resistance Tactics covers the events shown in the recent Netflix series, while also taking the opportunity to expand upon it by delving deeper into things that weren’t shown on-screen. For fans of the universe and the Netflix show, it’s an intriguing prospect, and there will surely be those who will enjoy the greater context the game provides to the events of the show. For the most part, however, what should have been one of the game’s biggest strengths only ever remains a strength on paper, owing to how poorly it’s executed. 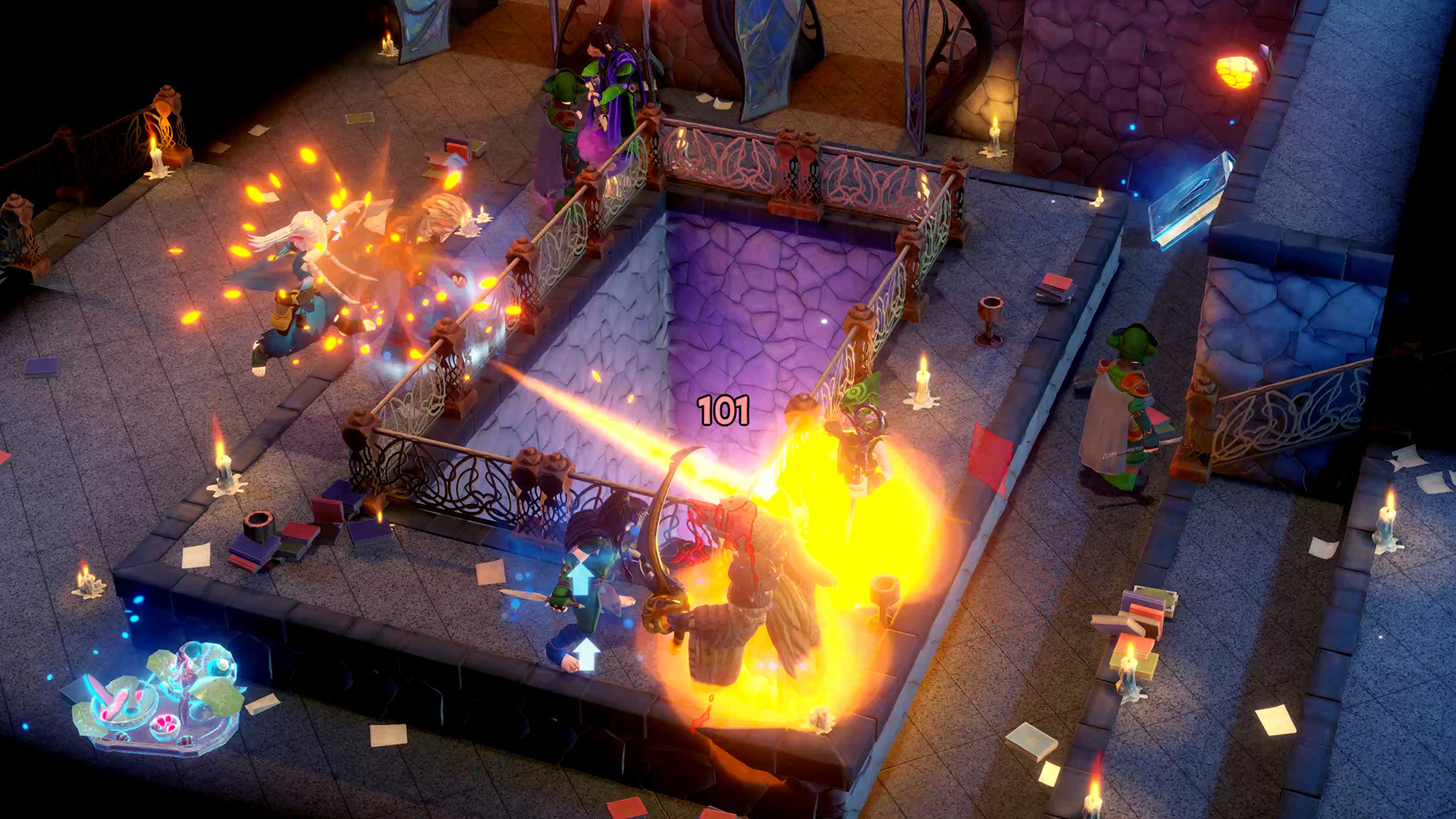 "If you go in expecting a solid, if ordinary, tactical RPG – and nothing more – you’ll be getting your money’s worth."

Storytelling is very disjointed and consistently rushed. Players are dropped right into this dense, rich fantasy universe and provided little context for anything, while most pivotal story moments feel like they’re being glossed over. The writing is constantly clunky, as if the game is in a hurry to move on from the storytelling bits and take players straight to the action.

On one hand, I appreciated how nothing felt like it was dragging on too long, and how it never felt like too much time was passing between battles. On the other hand, I was thoroughly uninterested in the story as a result, which is a shame, because this is a setting that is ripe for some truly fantastic storytelling. While fans of the show and the movie will find the narrative easier to invest in for obvious reasons, for those who have never had much experience with the property, the story will feel like little more than noise.

It’s good, then, that the bulk of the game focuses on battles- because those are actually fun. It’s clear that BonusXP have a good understand of the ins and outs of the genre, and Age of Resistance Tactics constantly displays that understanding. It nails most of the fundamentals, and though some facets don’t escalate as much as I had hoped, it does at least execute most of the aforementioned fundamentals quite well on a consistent basis. 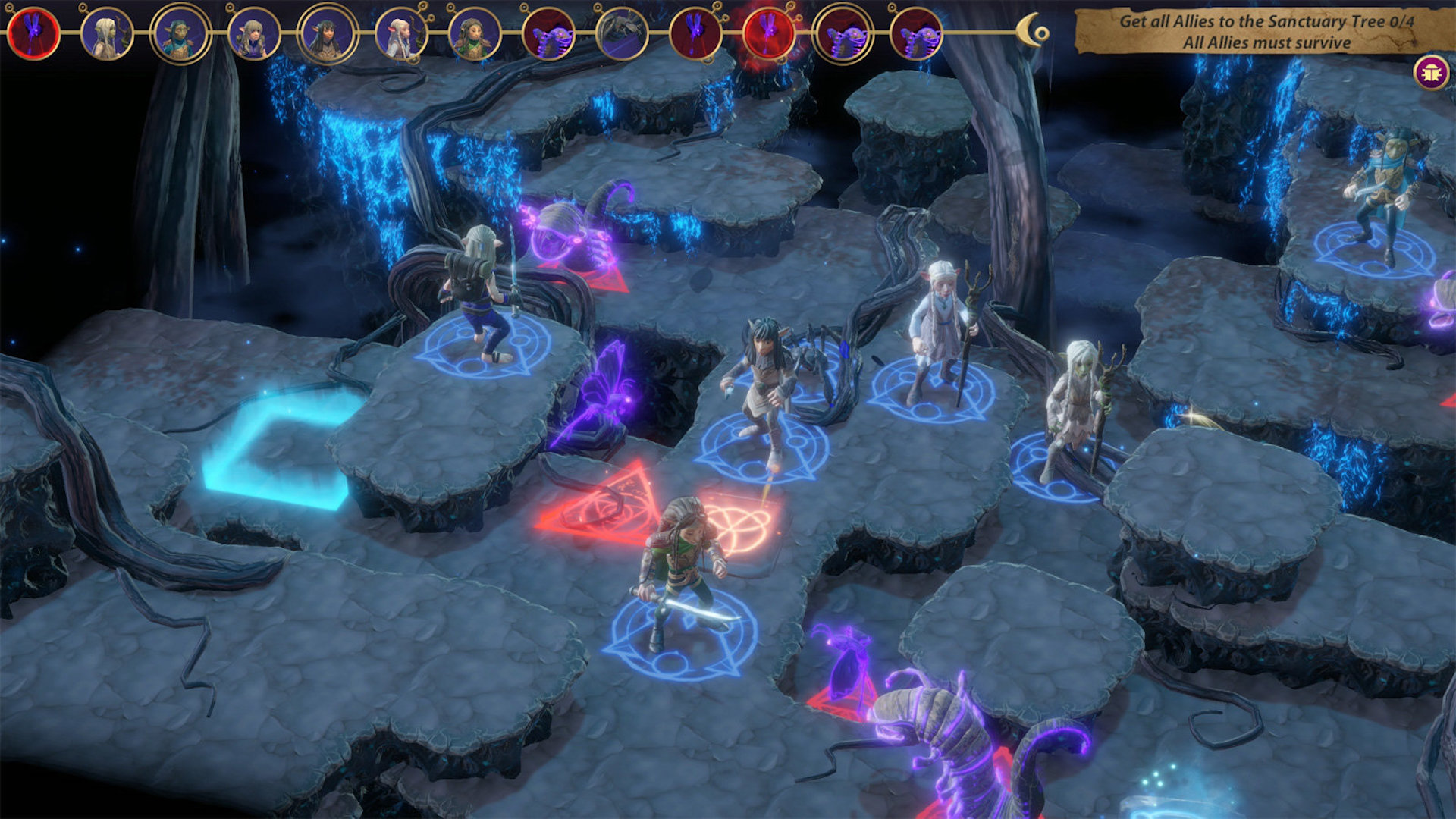 "While fans of the show and the movie will find the narrative easier to invest in for obvious reasons, for those who have never had much experience with the property, the story will feel like little more than noise."

Take the characters for example- there’s over a dozen playable characters in the game that gradually join your party, and examining their strengths and weaknesses, purchasing and equipping them with better gear, and then constructing your party to suit the needs of each battle adds an interesting layer of strategy. Things are made even more interesting by an engaging jobs system. You can assign two jobs to a character at a time, and as they level up, they unlock new jobs, which get progressively more specialized. There’s plenty of room for experimentation here, and the number of the possible permutations means there’s a decent amount of build variety. And with a total of a dozen jobs that you can unlock (for most characters), there’s more complexity here than you’d expect.

Each job brings its own unique attributes, of course, providing different buffs and debuffs to stats, but they also give characters access to special abilities – both passive and otherwise – that can be used in combat, such as being able to heal allies, or a ranged attack that lowers the enemy’s movement, or a special attack that can only be used after a unit has moved three turns, but deals significantly more damage. Some of these abilities can also be used in combination- for example, after using the Mark ability on an enemy with a Scout, you can use a Paladin’s Double Strike on a Marked enemy to attack them twice in a single turn. You can pull off that combination either with two characters, or with a single character who’s both, a Scout and a Paladin, and has those two abilities equipped.

Add to that the restrictions on how many abilities a character can equip at a time – three from their primary job, and two from their secondary one – and their movesets are something else that you have to mull over and decide on, and something else that allows you to personalize them as you see fit. In isolation, these are all simplistic systems, but Age of Resistance Tactics uses them in combination to create a surprising amount of depth, giving you quite a lot of control over the progression of multiple characters on a micro scale, and the composition of your party on a macro scale. It starts off quite shallow and simplistic, but progressively keeps adding more layers. 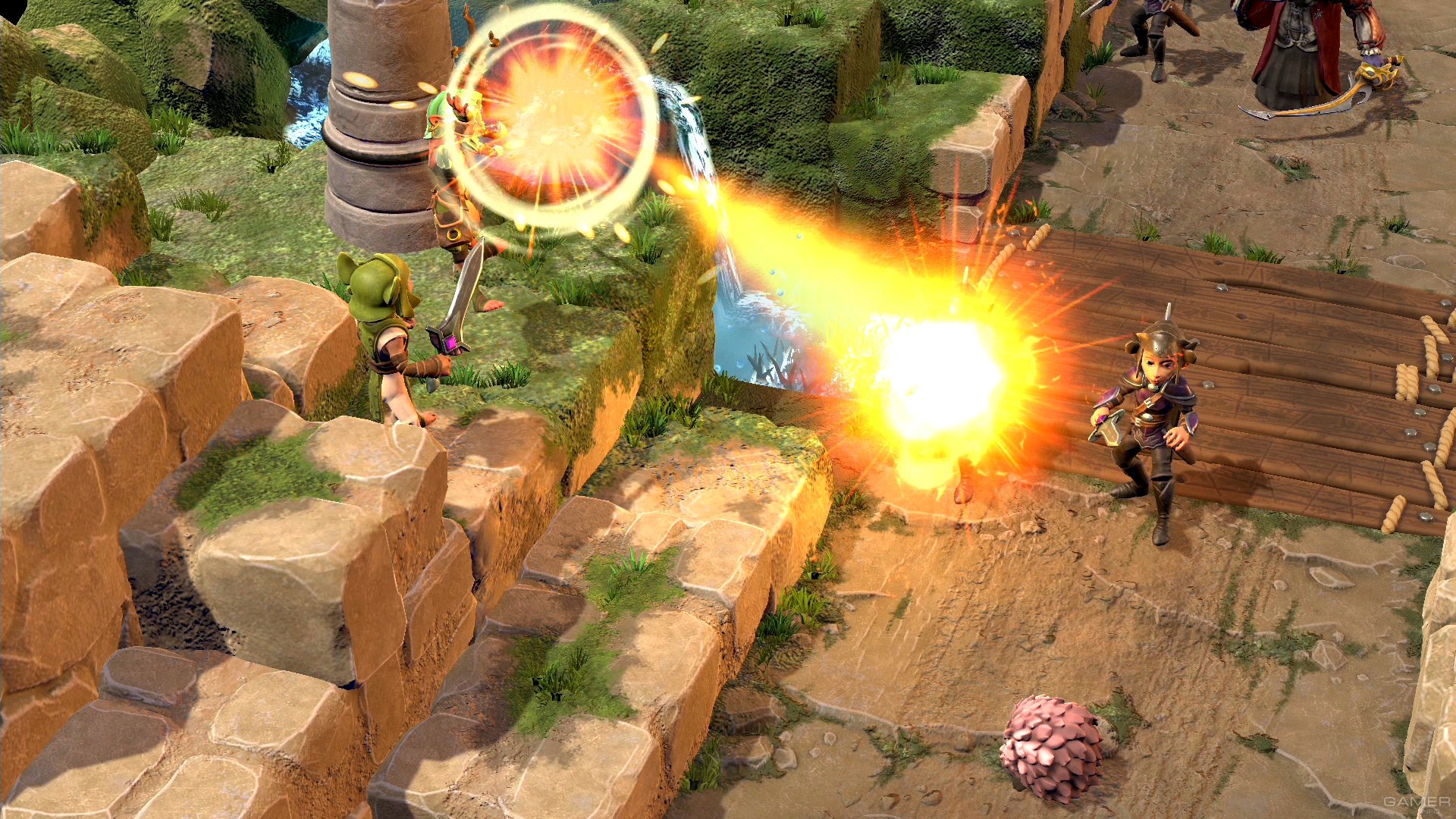 "In isolation, these are all simplistic systems, but Age of Resistance Tactics uses them in combination to create a surprising amount of depth, giving you quite a lot of control over the progression of multiple characters on a micro scale, and the composition of your party on a macro scale."

None of that would make any difference if the game didn’t put up some sort of a challenge. Thankfully, Age of Resistance Tactics keeps throwing some decent challenges your way, incentivizing you to make use of its progression mechanics and to think more tactically about how you approach battles and how you upgrade every character. Not every battle is a tough one, but there are quite a few skirmishes in here that will test you, where you will have to keep an eye on things such as party composition, character builds, and unit placement.

Similar to the progression mechanics, map design in Age of Resistance Tactics also starts off very simple- however, this is one area where the game doesn’t show too much growth. It does throw some interesting elements into the mix, such as hazards, or chokepoints, or elements in the battlefield that you can interact with to use to your advantage- but it’s all pretty basic stuff. Even when the game is well into its runtime, the maps will mostly only throw the kind of hurdles at you that something like, say, Final Fantasy Tactics would have moved on from within its first few hours. Of course, this is a much more small-scale production than Final Fantasy Tactics, and so the two aren’t really comparable in that sense. It’s just disappointing that that the game isn’t more ambitious with its map design.

Age of Resistance Tactics suffers from a few other issues as well, some of which do have a noticeably detrimental effect on the experience. For instance, there’s the camera, which can zoom in or out or rotate left or right, but doesn’t allow you to adjust the angle of its tilt, which means your visibility of important things in the battlefield all too often gets obstructed, forcing you to constantly keep fiddling with the camera. 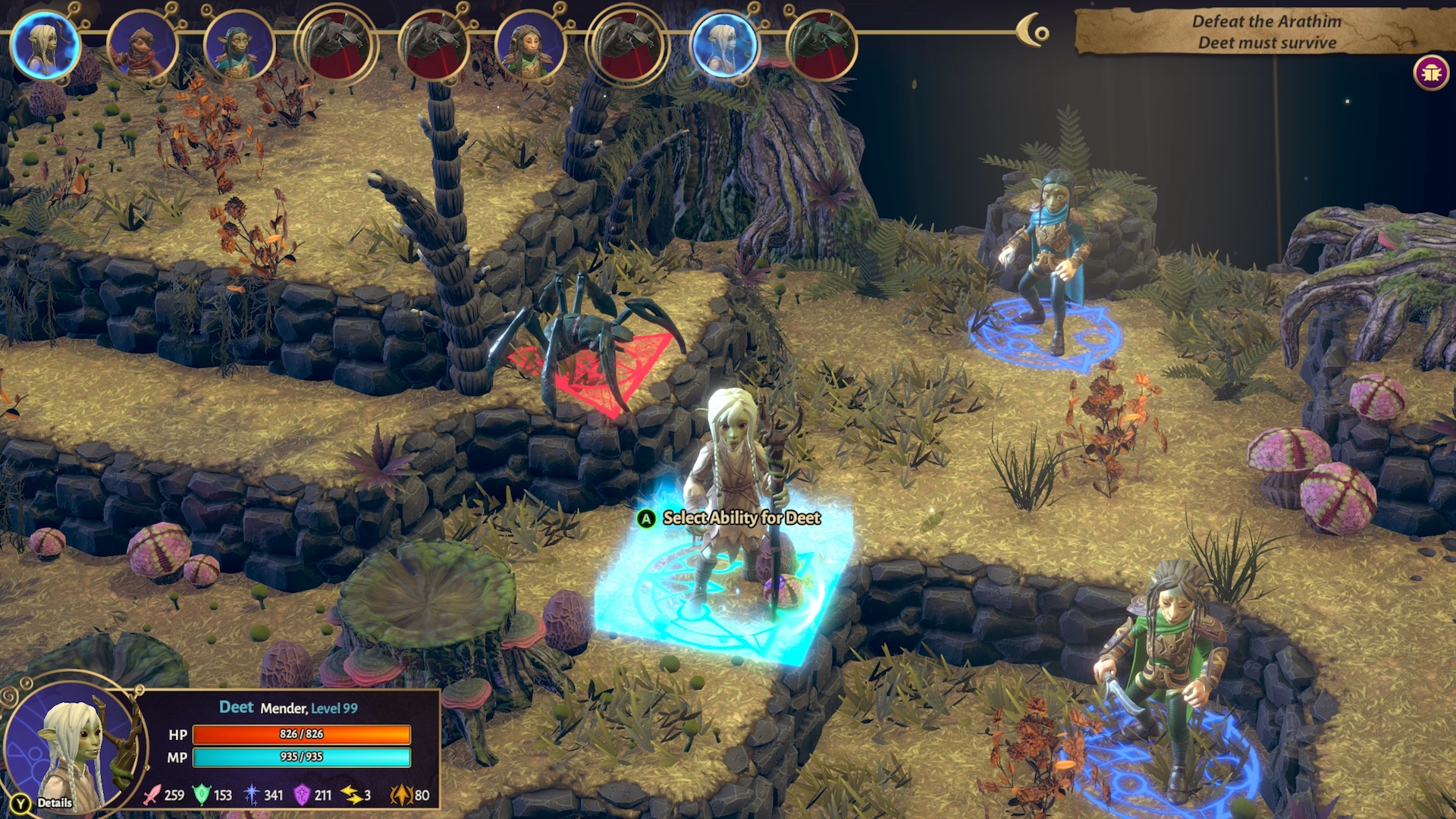 "It’s disappointing that that the game isn’t more ambitious with its map design."

Then there’s the fact that you can’t use the d-pad to move your characters or select commands, which seems like a glaring omission in a grid-based game, especially since the analog stick can often feel quite inaccurate. Some basic quality of life features that you’d expect to see in any tactics game are also missing- for example, to attack an enemy, you cannot select your character and then simply select the enemy you want to attack. Instead, you have to select your character, move them to a tile adjacent to an enemy unit, and then manually select the attack option as a separate action. These issues all come together to make the game feel like it’s lacking in polish, and in a game that otherwise seems to understand its genre so well, it’s weird to see such baffling oversights.

Taking the good and the bad together, there’s still plenty to like here, even though some of it is let down by issues that are often hard to ignore. The Dark Crystal: Age of Resistance Tactics doesn’t re-invent the wheel, and its storytelling is clunky as hell, but the core of the game – the part that matters the most – is largely well-executed, in spite of missteps or missed opportunities here and there. It doesn’t do justice to its source material, nor does it come close to matching the excellence of the games it draws inspiration from- but it’s solid enough. And sometimes, “solid enough” is good enough.

Jobs system has a surprising amount of complexity; Lots of control over individual character progression and larger party composition; Plenty of challenging and engaging battles.

The Dark Crystal: Age of Resistance Tactics doesn't do justice to its source material, nor does it come close to matching the excellence of the games it draws inspiration from- but it's solid enough. And sometimes, "solid enough" is good enough.

A copy of this game was provided by developer/publisher for review purposes. Click here to know more about our Reviews Policy.
Tagged With: bonusxp, en masse entertainment, nintendo switch, pc, ps4, The Dark Crystal: Age of Resistance Tactics, Xbox One