The House of the Dead: Remake Review – Shambling Corpse

The House of the Dead is still enjoyable at its core, but the remake has more than a few rough edges.

The House of the Dead has a permanent place in the history of the medium. Sega’s light gun rail shooter was an arcade revelation back in the day, and its legacy remains unshaken to this day. Now, thanks to developer MegaPixel Studio and publisher Forever Entertainment, the arcade classic has come back into the limelight with a full-fledged remake for the Switch- but though it’s still an enjoyable arcade shooter at its core, the game is held back in some ways, making for a decent but rough experience.

The House of the Dead: Remake is a very faithful recreation of its source material as far as its primary content is concerned. The game sees you playing as one of two different agents, tasked with heading into the mansion and lab of the villainous Dr. Curien to put a stop to his evil experiments- which, of course, have spawned a deluge of zombies and all sorts of mutants and monstrosities that you have to blast through as you make your way further in. 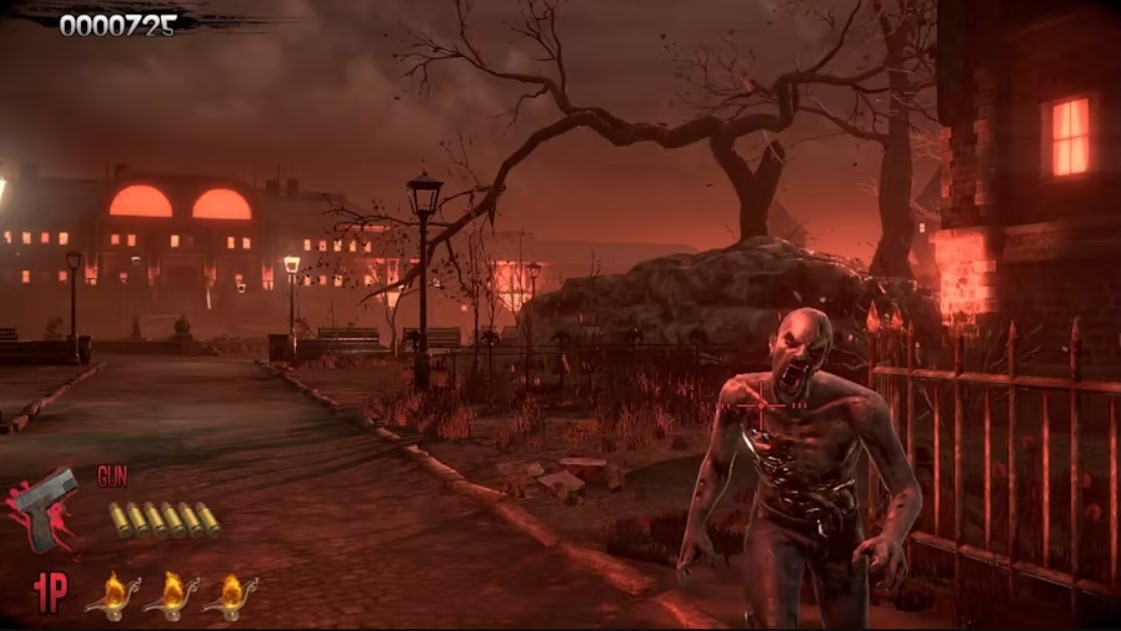 "Though it’s still an enjoyable arcade shooter at its core, The House of the Dead: Remake is held back in some ways, making for a decent but rough experience."

The story is threadbare and often bafflingly refuses to provide context where it feels like it should, while the voice acting and writing, appropriately enough, are the epitome of campy and just all-around hilariously bad. It’s very much on-brand, and didn’t particularly bother me much – that stuff isn’t the main appeal of these games anyway – but newcomers should still be warned not to go in expecting something that emphasizes production values or storytelling in any way, shape, or form.

Thankfully, The House of the Dead: Remake’s main attraction is its rail shooting, and that’s an area where the game sticks the landing, for the most part. Going through the game’s constantly changing environments is a lot of fun, especially on your first run through- there’s just something uniquely appealing about the campy horror trope of heading through mansions and into caverns and underground labs while contending with all manner of monstrosities. It’s simple and effective.

It helps as well that there’s a solid variety of enemies that you run into this game. Starting off with regular old zombies and having everything from mechanical spiders and bat-like creatures to mutant humanoids and more, The House of the Dead: Remake has a pretty impressive pool of enemy types that it keeps diving into. Landing hits on enemies and watching them explode into chunks of gore and viscera also never gets boring, while the game keeps things interesting in some other areas as well, from optional and missable challenges in environments to different paths to take and multiple endings to see.

The House of the Dead: Remake does have one pretty significant issue with how it controls. On the aiming side of things, either with gyro aiming or with the analog stick, things are mostly fine. It never feels as intuitive as an actual light gun shooter, of course, but it’s not a massive gulf by any means. At its core, aiming and shooting still feels fun. The problem, however, is the new reload mechanic.

"At its core, aiming and shooting still feels fun. The problem, however, is the new reload mechanic."

As a result of transitioning from light gun shooting to gyro/traditional controls, The House of the Dead: Remake has players reload by hitting the left trigger rather than aiming off-screen and shooting in the original game. That means there’s nothing stopping you from simultaneously shooting and reloading literally non-stop. The original House of the Dead placed a lot of emphasis on having to carefully place your shots, since reloading was a manual act that interrupted shooting. In the remake, you can go through the entire story without ever interrupting the simultaneous reload-shoot loop for even a second. It cheapens the action by a great degree, and makes things significantly easier. Again, it’s still fun, because the simple act of aiming and shooting is fun, and because the game does a lot to encourage replays, but the new reload mechanic does take something away from the experience.

It helps that the main story mode has some of the replay appeal, because it’s not a particularly long experience. You can blow through The House of the Dead: Remake’s four chapters in well under an hour- which makes sense for an arcade game, of course, but might be disappointing to newcomers looking for a meatier experience. And honestly, there’s only so many times you can run through the same four levels before getting bored of them, even with the variation the game does throw in here and there. At $25, The House of the Dead: Remake isn’t necessarily expensive, but some might still find its content offerings inadequate with respect to the price.

Of course, there are a few additional offerings in The House of the Dead: Remake outside of its story mode that help improve things. In addition to in-game achievements and multiple difficulty levels, the game also has two co-op modes- cooperative mode sees players sharing their score total and continues, while competitive mode has different scores and continue counts for each player, with both trying to outscore the other. Competitive mode in particular is a neat mode if you have sometime that you can jump into the game with every now and then for a quick run through its story.

Meanwhile, The House of the Dead: Remake has a new horde mode as well- which, honestly, feels a little redundant. You go through the same four levels in the horde mode, only things are harder here, with more zombies attacking you at any given time and taking more shots to go down. It’s a nice bit of added challenge, but it doesn’t do enough to bring more meat to the package’s bones- which is something that it feels like it needs. 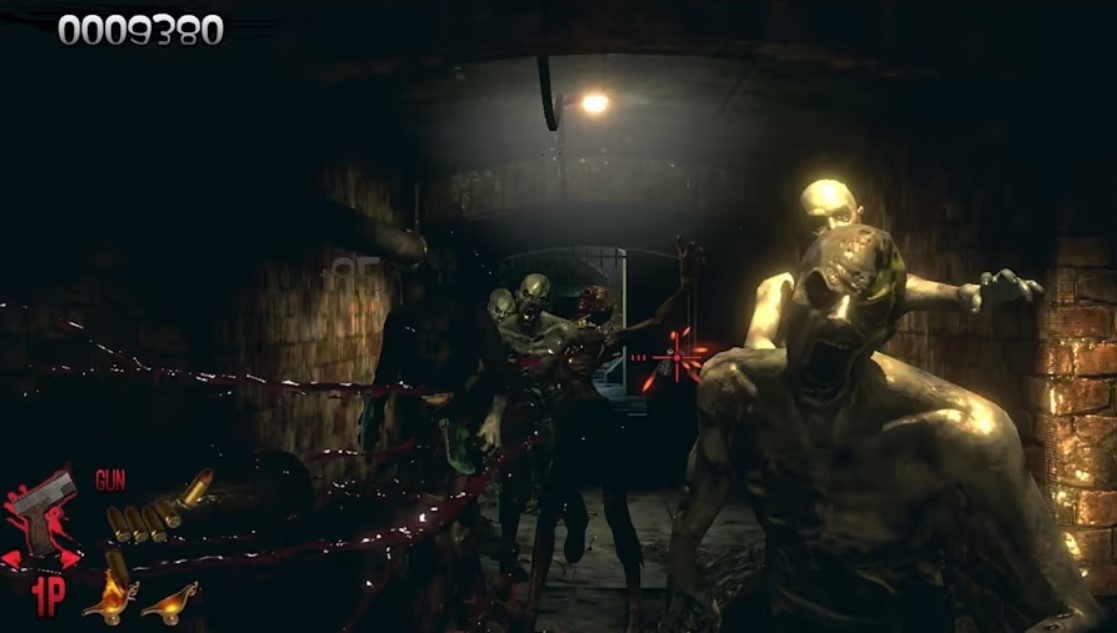 "You can blow through The House of the Dead: Remake’s four chapters in well under an hour- which makes sense for an arcade game, of course, but might be disappointing to newcomers looking for a meatier experience."

On the visual side of things, this isn’t a very good looking game. The House of the Dead: Remake goes to the effort of completely re-creating the entire game from scratch, so it’s a shame that more effort didn’t go into its visuals. Zombies exploding into gore looks alright, as it always will, and the environments have cool art design, but by and large, this is a pretty rough-looking game. Performance, too, is an issue, and while a Performance Mode does reduce the visual quality (even below than its already-not-impressive baseline) to have more consistent frame rates, it still doesn’t feel like a perfectly smooth experience.

The House of the Dead: Remake has quite a bit going for it- it’s inherently fun, it’s got decent replay value, and above all else, it’s a faithful remake of a beloved classic that does a solid job of paying tribute to the original. It’s got issues though, and not minor ones- which does drag down the experience. The new reload mechanic cheapens the gameplay in significant ways, the game doesn’t look gate, and it’s way too short, and doesn’t have enough content on offer, to justify its price for someone who doesn’t have a strong attachment to the IP. The House of the Dead: Remake is a decent throwback, but with a little more meat and a little more polish, it could have been more.

Aiming and shooting is still enjoyable at its core; Going through the environments and fighting different kinds of monstrosities is a lot of fun; Decent replay value.

Final Verdict:
AVERAGE
The House of the Dead: Remake will appeal to fans of the original for obvious reasons, but several significant issues hold the disappointingly threadbare experience back in several ways.
A copy of this game was provided by Developer/Publisher/Distributor/PR Agency for review purposes. Click here to know more about our Reviews Policy.