The Last of Us Review

Naughty Dog’s latest is the industry’s prime offering so far.

Imagine a world where almost everyone and everything is against you. The lands you traverse are full of danger as mutated creatures and daunting enemies lurk the darkest corners. Every stride you take forward is one step closer to your own annihilation. But somewhere, somehow, you find a reason to move ahead with something worth fighting for. The Last of Us is a game that treads on the thesis of human spirit, relationships and emotions. It’s an experience you will unlikely find in most modern games.

The game is set in a post apocalyptic era where most of the population has been wiped out by a cordyceps-type fungus. Oddly, the game does not explain the nucleus of this infection, which may put off a few players. However, in the grander scheme of events, players will understand that the The Last of Us is primarily a game based on the father-daughter like relationship between Joel and Ellie respectively, akin to that of Lee Everett and Clementine in last year’s The Walking Dead. 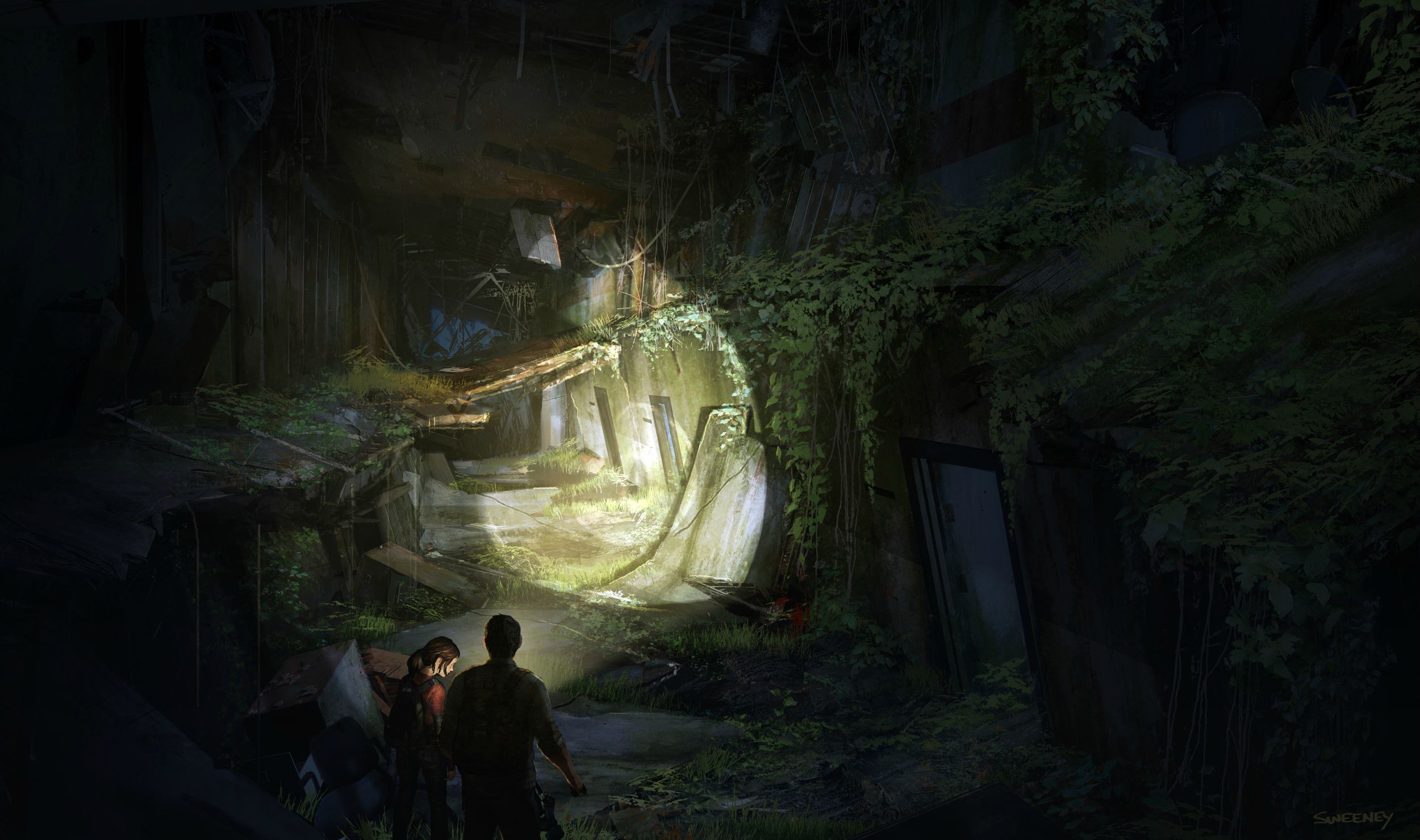 Joel is a hardened black marketer who has seen his share of predicaments. Twenty years later he finds himself accompanied by a survivor named Tess. They need to smuggle a fourteen year old girl (Ellie) to the Fireflies, one of the several factions in the game. They journey through several parts of America, fending off scavengers, the deadly Clickers and the military. I’ll spare you the most minute gameplay details, but you will come across several gut-wrenching situations in The Last of Us. These include the usual crooked characters and a mix of extremely depressing moments.

"Limbs blown in to bits, heads smashed in to walls and the gruesome melee combos may even make some players barf. "

The Last of Us is definitely a mature game and there is a colossal amount of violence that comes with that tag. It wouldn’t be surprising if players found Joel to be as barbaric as some of the savages he meets, but there is a comprehension behind his agitated behavior. As the game builds up, you will find Ellie to be equally fierce as well. Players will be popping out eyes with a knife, carrying out decapitations and perpetrating an altogether uncomfortable level of violence against women. Limbs blown in to bits, heads smashed in to walls and the gruesome melee combos may even make some players barf.

The combat in the game is no-nonsense and decidedly straight-forward. Players will pick up several types of weapons like handguns, revolvers, shotguns, rifle and the crowd-favorite flame thrower. All of these weapons can be upgraded on a bench, which can be found at specific locations in the game. There is also a bow available but it’s ultimately counterproductive in most cases. 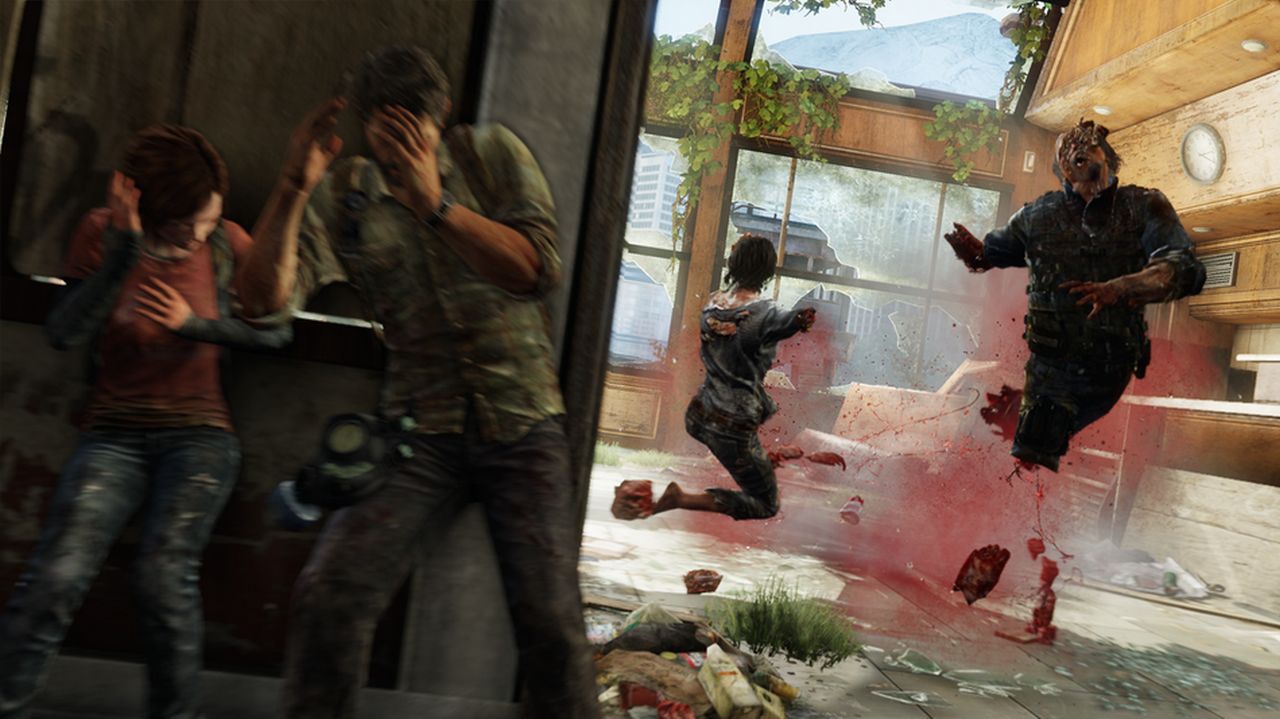 Gameplay is fairly non linear with wide open spaces throughout. It’s highly recommended that one explores every possible area and search for parts that can be used for crafting significant items like medi-kits, molotov bombs, smoke bombs and more. You can also mod melee weapons like the axe and baseball bats. As a whole, the weaponry red tape is realized effectively.

The game does not have an in-depth leveling system but it rewards the player with skill points. These can be used to enhance Joel’s health, listening distance, crafting speed and more. It’s just a small part of the gameplay but eventually these tiny bits make the game so much fun to play and make your odds better to face against intimidating enemies.

"The Infected make your blood curdle like no other undead/infected creature could."

Speaking of intimidating, the Infected make your blood curdle like no other undead/infected creature could. They’re divided in to two types: Clickers and Runners. Clickers are blind but hypersensitive to sound, so keep your distance as the lightest of noise will drive them into a manic state. Runners will attack on sight and as the name suggest, they are agile and quick on their feet. There is also a third type which is extremely infected, bloated and slow to move, taking a good chunk of your ammo to kill. 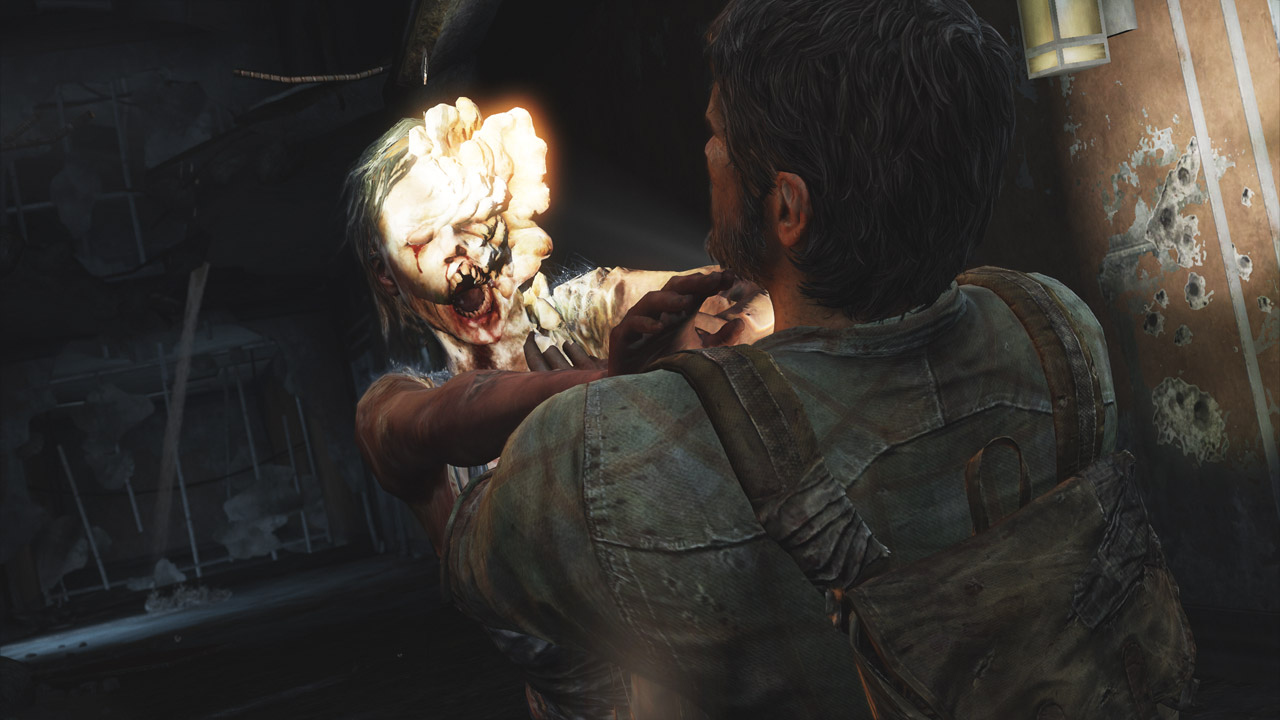 Regardless of the enemy type, you’ll need to take your time and think over the situations presented. These are adept detractors the player is dealing with. Set bombs at the right places, conserve your ammo and make every shot count. The Listen Mode will allow the player to see some enemies through walls. This is a neat addition, although we have already seen it implemented in last year’s Hitman Absolution and countless other action-adventure titles.

In terms of visuals, The Last of Us is like no other game out there. You’ll be stunned by what Naughty Dog has achieved with the PlayStation 3 and although there are some low resolution textures here and there, the atmosphere, quality of the motion capture and animations make it a work of art. The player will come across picturesque mountains and valleys as Joel and Ellie make their way across riding on horseback, which highlights the vast draw distance amazingly well.

There are times in the game where Joel and Ellie won’t come to an agreement, and this only showcases the astounding facial gestures all the more. Intricate details like blood pouring from Joel’s hand or the exasperated face Ellie makes when she lobs on an enemy from behind have been unmistakably captured. 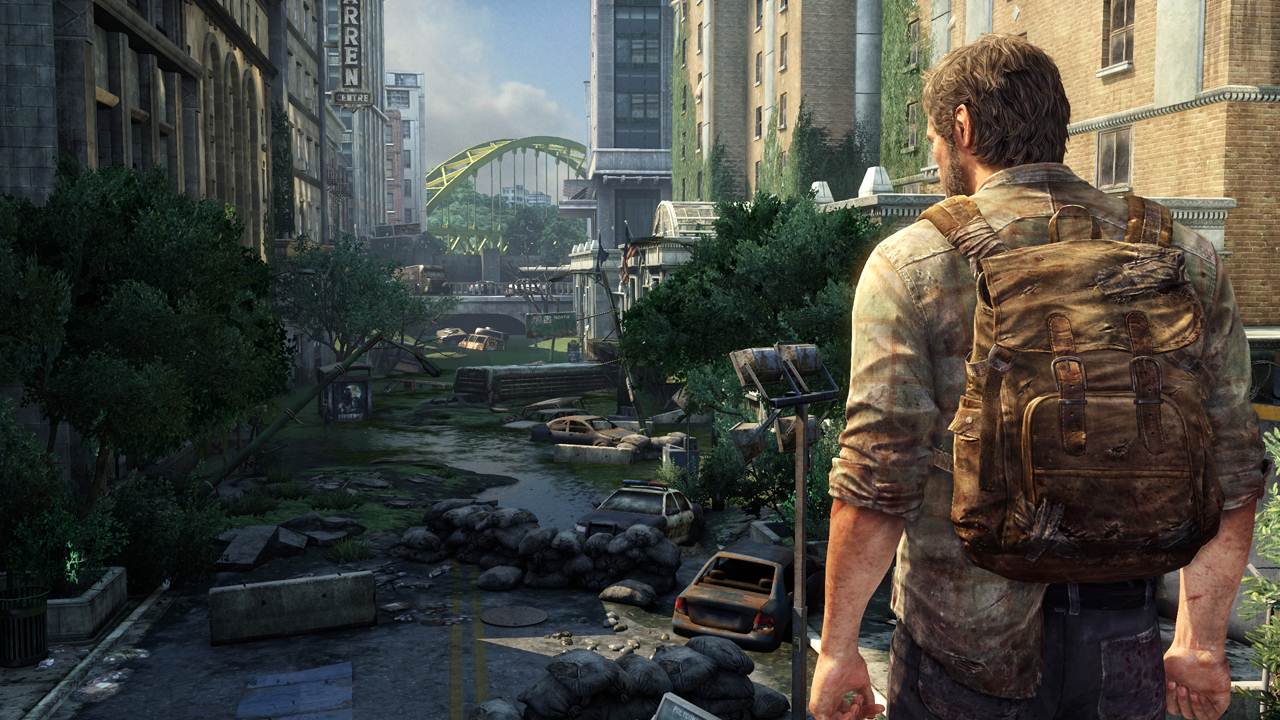 Troy Baker does a great job of voicing the gruff Joel while Ashley Johnson is impeccable in giving Ellie her personality. Her cries, laughs and random mumbling while roaming the lands have been peculiarly performed by Ashley and help make Ellie all the more human. The supporting cast also does a great job of moving the story along, but for accentuating the atmosphere and driving home the true emotional weight of the game, Academy Award winner Gustavo Santaolalla’s score shines. His tracks carry the weight and melancholy a game like this warrants – it would be amazing to see how different the experience would be without his work. The infected sound phantasmal, and no matter how many times you meet, they will forever find ways to strike fear into your heart.

The multiplayer portion of The Last of Us ties in with the campaign mode. Titled “Factions”, players can either take up the role of the Hunters or Fireflies. Players can join or create a clan and then work together to stay alive in the traumatic post apocalyptic conditions. This means protecting supplies, reviving fallen clan-mates, crafting items and going on supply run missions. As you progress further, your teammates may get sick or run in to group of Clickers forcing you into specific portions with special executions or even just achieving a set number of head shots.

The player can jump in to Survivor mode which is essentially death match with no respawns, or the Supply Raid where you search for supplies. In this mode, your team will have 20 lives in total and the match continues until one of the teams loses all their lives first. Naughty Dog have created some truly massive maps for the multiplayer, giving enough time to the player to explore and devise strategies using the Listen mode. 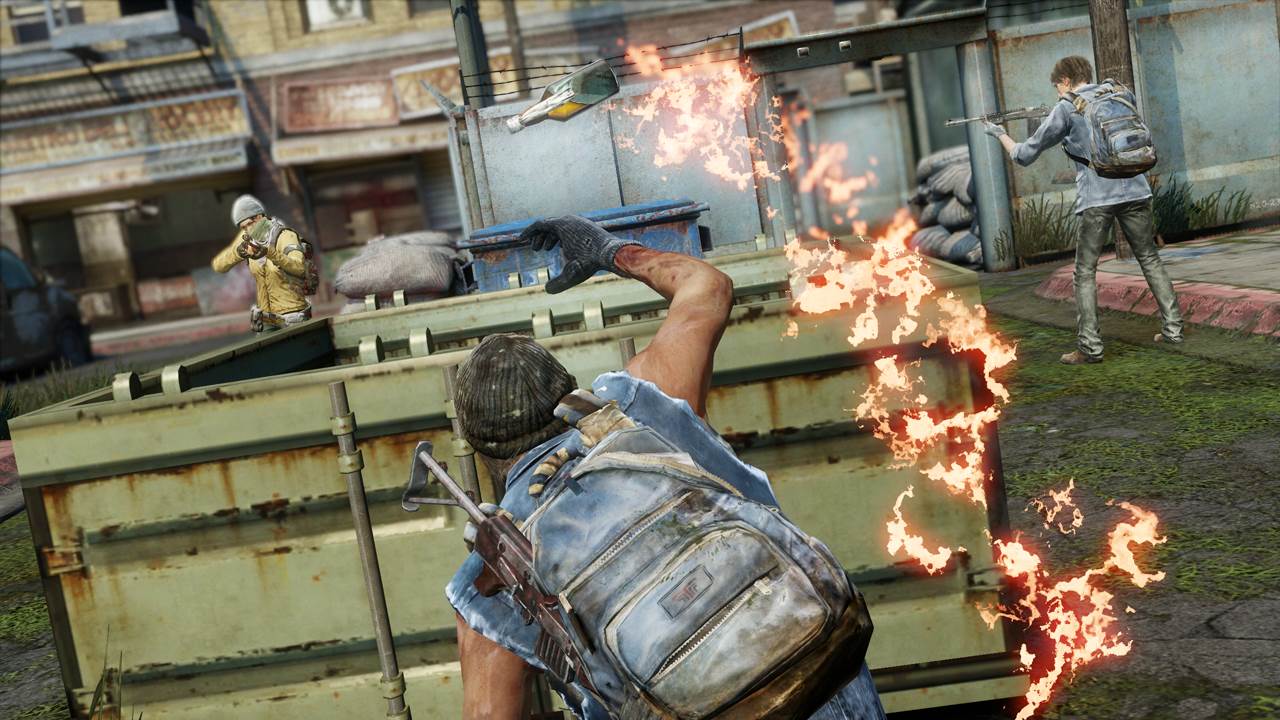 Any supplies that are left after the match are counted towards the XP system, enabling the player to unlock outfits, weapons and other customization options. The game also awards the player with points which can be used to level up. These points can be spent on boosters which are similar to those seen in Uncharted 3: Drake’s Deception.

Much like the campaign mode, the multiplayer requires the player to take a more subtle and stealthy approach. You can’t expect to survive long if you go all out with guns blazing. Overall, the multiplayer is most certainly unique despite the the lack of anything revolutionary. The single player is where the real meat is but the players should experience it regardless.

If any game ever deserved an 11/10, then The Last of Us would be it. It’s an extraordinary achievement by Naughty Dog and only highlights the sheer lack of games these days that talk to or affect the player so deeeply. It’s gory and violent set pieces won’t appeal everyone, but its intriguing cast of characters, paramount storytelling, deep and engaging gameplay mechanics, breath-taking visuals and beautifully realized score make it a perfect swansong for the PlayStation 3.

Dark and gritty setting will suck the player right in, exceptional voice acting and splurge of emotions, solid choice of weapons, Joel and Ellie are extremely deep personalities, Infected are scary, the game rewards the patient player, superior multiplayer options packed in.

Extreme violence may not be for all, the game does not explain the origins of cordyceps-type fungus.

Final Verdict:
EDITOR’S CHOICE
Naughty Dog’s last PlayStation 3 game is discernibly the greatest offering of the current generation. The story touches the player’s heart and most importantly makes you feel wanted. You will grow to care about the characters and bind in with their emotions. The Last of Us is a sign of the video games industry coming to age.
A copy of this game was provided by Developer/Publisher/Distributor/PR Agency for review purposes. Click here to know more about our Reviews Policy.